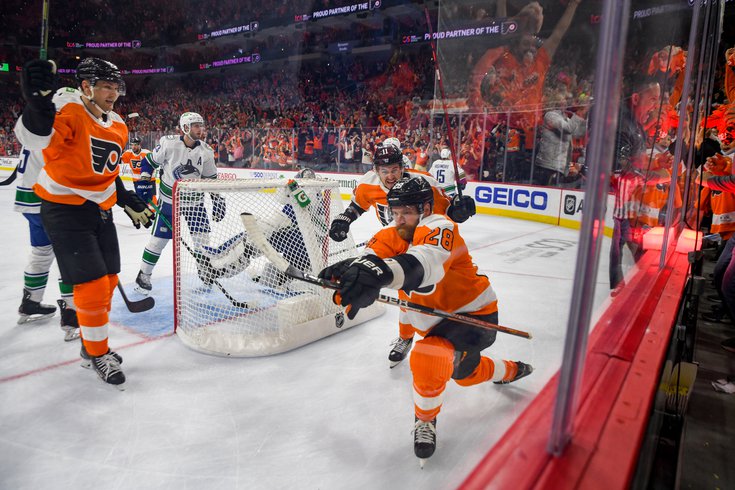 Claude Giroux's heroic tying-goal helped the Flyers earn a surprise point in their opener they wouldn't have otherwise.

The Flyers burst onto the ice Friday night like a team possessed, but their momentum eventually slowed as some bad luck bounces put them behind 4-2 with a few minutes left in the third period.

And then a pair of miracle goals — including this snipe from Claude Giroux — sent it to overtime.

And of course, as the Flyers are prone to do, they faltered in a shootout earning one point for their efforts in the 5-4 loss.

It's the smallest possible sample size, but this is Philadelphia. We love to react, interpret and dive deep. And so we've got a quartet of potential overreactions that fans will no doubt be carrying with them through the weekend until their second game of the season against the Kraken on Monday.

1. Is Carter Hart still a concern?

The No. 1 question, particularly for someone looking at a box score and seeing that Hart allowed four goals is that the young franchise goalie hasn't returned to form after his lackluster season in 2021. But he did save the other 35 shots that were fired on net, and a pair of the ones that did trickle in were really, really bad luck goals.

"You take those two unfortunate breaks, and his game was pretty good," head coach Alain Vigneault said. "His game was excellent. 3 on 3 [in overtime]. He gave us a chance, that’s what you want from your goalie."

All you really can ask is for the defense to have a short memory — including the goalie — and for the offense to make up for defensive lapses and even though it took them the full 60 minutes of regulation, that's what the Flyers did. Fans should actually be encouraged, not worried about Hart's play Friday.

"A few unlucky bounces, that’s the way the game goes," the 24-year-old said. "Yeah that puck just kind of bounced back pretty quick, didn’t have enough time to move my leg out of the way and it just goes off of my skate and in. That’s the game of hockey. You’re going to get a lot of bounces that don’t go your way. We stuck with it and got a couple bounces to go our way at the end."

2. Comeback, energy from team is encouraging

Out of the shoot, you'd think the Flyers had Stanley Cup expectations before and right after the puck dropped, as the atmosphere at the Wells Fargo Center impressed even veteran Cam Atkinson, who scored his first goal with his new team in his first game adorning the orange and black.

"It was special, pretty electric," he told the media afterwards. "I was telling some of the guys after the game about it. I was on the other end, for whatever reason the crowd got into it and eventually we tied it. Good to see all the support. Wish we could have gotten the win for the fans but I think we did some good things tonight."

There were a lot of fans who left Friday's game early, and when the team pulled Hart with around three minutes to go, it looked like little more than a desperation effort.

But sometimes that's what it takes, and they were rewarded by goals from Travis Konecny and Giroux. Perhaps the fact that the Flyers gave maximum effort in a low percentage situation is one of the most important takeaways from the shootout loss.

"It’s just you got to be able to play 60 minutes," Ivan Provorov said. "That was the biggest problem last year and we are definitely going to work on that. I don’t think because we did that today, it’s going to happen all year. I think today’s game shows that we got character and we are pushing and playing all 60. Today was more bad bounces than anything else. I think we’ll learn from that and we’ll get better with every game."

3. Unforced errors will be the end of this team

The bad bounces that led to the eventual four goals scored by Vancouver and the big late deficit were really of the team's own doing. A lack of chemistry (which makes sense, considering all the new faces) paired with some early season rust and perhaps lazy decisions put them behind the eight-ball with stupid penalties that gave the Canucks golden opportunities they should never have had.

"You know what, staying out of the box would be a good idea," Vigneault said, quickly pivoting from the bad to the good. "I liked a lot of our 5 on 5 games. If you analyze it, we did a lot of the right things."

Eight penalty minutes led to a pair of Vancouver goals, including one on a two-man advantage. There were also a bevy of missed connections and missed communications.

"Yeah, I mean chemistry with a lot of the new players isn’t going to come overnight," the captain Giroux explained, "but you can tell that when you play with new players you see a little bit of how they play and that hesitation that maybe we have in our game right now. It’s going to go away. We just got to keep building there."

No team in NHL history (at least the short history of the league using shootouts to determine the winners after 65 minutes of play) has been worse in shootouts than the Flyers — who have the worst winning percentage of all 32 teams at .363. Only four teams have won less games in shootouts, and two of them are recent expansion teams.

And for whatever reason, the shootout seemed to lack juice Friday night and the Flyers really appeared to roll over and die during it.

Interestingly, they are bad on both ends during shootouts — as the Flyers' shootout goalies have allowed goals on 37.9% of opposing shots, which is the highest in the NHL. Their would-be scorers are the second worst in the NHL over their 146 all time shootouts, scoring on 27.1% of tries.

Here's hoping they'll figure out a way to be competitive in these important tests of skill going forward.