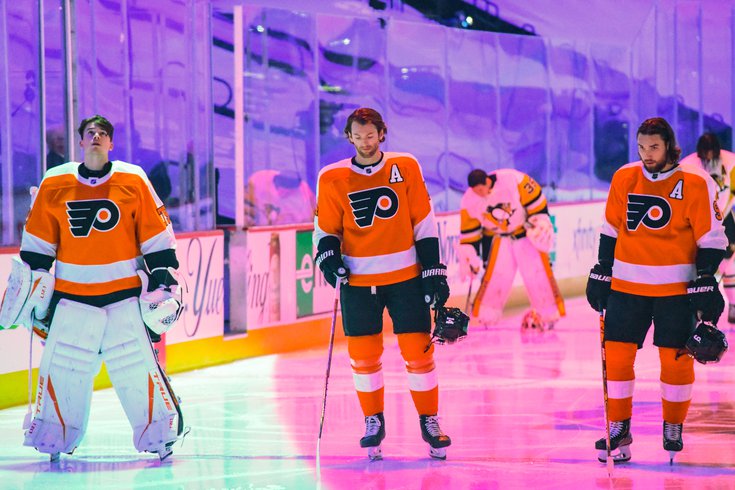 Carter Hart, Sean Couturier and Ivan Provorov will all play key roles for the Flyers this season.

If you were living under a rock the last five months, you’d find yourself quite confused at the makeup of the Philadelphia Flyers. That's because general manager Chuck Fletcher followed through on his pledge to revamp this organization following a disappointing 2020-21 campaign that saw the team closer to the bottom of the conference than to a playoff spot.

Just how different is this team? When the Flyers open up on Friday in front of a sold-out Wells Fargo Center against the Vancouver Canucks, the fans will be treated to seven new faces in the lineup, including one on each of the three defensive pairings.

With such a large overhaul — one that also includes a new backup goaltender — expectations within the organization are sky high. For the fans, though, there's still some uncertainty as to just how far this team can go and reservations about just how competitive this team can be in a league full of parity.

Why expectations should be high

There were a few commonalities among the majority of the player acquisitions this summer. Head coach Alain Vigneault and Fletcher didn't hide their thoughts on feeling a culture change was needed, both on and off the ice. In order to reinvigorate the locker room, the team went out and brought in veterans with skill, grit and, more importantly, leadership experience.

All three of the newest defensemen in the lineup — Ryan Ellis, Rasmus Ristolainen and Keith Yandle — have served as assistant captains with their prior clubs. The same goes for Cam Atkinson, Derick Brassard and even Nate Thompson, who briefly played for the club in the 2019-20 season. Those six players combine for 15 years of experience in wearing an “A” on their respective teams’ sweaters.

Between those six players and the leaders that were already here in Sean Couturier, Ivan Provorov and Claude Giroux, who will enter his 10th season as the team’s captain, Vigneault will have plenty of veterans to lean on in his third season as the head man.

All of that leadership infusion was intentional and a part of Fletcher’s vision in improving this roster.

“Anytime you can add good quality people — good, experienced players who have been leaders on other teams — it's only going to enhance your leadership group,” Fletcher said during a July press conference.

In addition to the new crop of players joining the orange and black, there’s plenty of reason for excitement due to the expected bounceback season for Carter Hart. There's no question something was off for the young netminder during the shortened 2020-21 campaign. The 23-year-old is focused on returning to form, a la his 2019-20 run, where he went 24-13-3 with a career-high 2.42 GAA and a .914 save percentage.

If Hart can return to the mean, which also will be aided by the major improvements along the blue line, there's no reason to doubt the Flyers as being a legitimate playoff team.

The organization also shot an extra boost of confidence into him after extending him in the offseason with a three-year extension worth about $3.9 million per season.

“It’s really great to know that an organization is behind you and they trust you,” Hart said following his new deal. “Now it's my job just to go out and play the game.”

With Fletcher and his team doing all they could to get this group setup for success, the weight of this squad’s success will ultimately come down to those who underachieved last season returning to form. Hart leads that charge in that department, but not far behind him on the importance scale are the likes of Travis Konecny, Travis Sanheim, Oskar Lindblom, Nicholas Aube-Kubel and Provorov.

Getting those young guys who have flashed at different points to find their highest levels again will be essential. The team needs Konecny to get back to his team-leading goal-scoring like he did two years ago and for Provorov to play like a legitimate top pair defensemen. All signs this preseason point to Lindblom looking like his former self prior to his cancer diagnosis, which would give the Flyers one more scoring threat.

That's not to mention the continued growth of Joel Farabee and his team-best 20 goals from last season. All of these factors are why Flyers fans should set high expectations for this team as they embark on their 82-game season.

Why expectations should be tempered

There's always going to be a pessimistic side of any fan base. While there's more than enough reason to believe in this unit as outlined above, there’s still one elephant in the room: the Metro Division is loaded.

Arguably the toughest alignment in the league, the Metro touts some of the strongest and most complete teams with the likes of the New York Islanders, Washington Capitals and Carolina Hurricanes. Add in the Pittsburgh Penguins, who hope to have one more run left in them with the core of Sidney Crosby and Evgeni Malkin, and an improving New York Rangers and New Jersey Devils and it'll be a challenge every night for these eight teams to pick up wins.

With expectations being that this group will spend much of the season beating up one another, any lengthy losing streak can dig a team like the Flyers into a too deep a hole to climb out of.

Division foes aside, some fans are not sold on Hart being able to confidently bounce back. Then there are some worries over Martin Jones, who will serve as the backup and will likely see around 30 starts.

A once highly-touted goalie prospect in Los Angeles, Jones has had three straight seasons with a save percentage south of .900 and is fresh off his highest goals against average (3.28) in 34 starts with San Jose. The Flyers are banking on him rekindling his early-career success by teaming him back up with goalie coach, Kim Dillabaugh, who coached Jones in the Kings system.

“He's spending a lot of time right now with Dilly off the ice and on the ice to get his game where he believes he can get it to, and we believe he can get to it,” Vigneault said on the fourth day of training camp. “I think it's going to be real fun for us.”

Others feel that all of these new additions look great on paper but if the chemistry takes longer to develop, it may put the Flyers in a position of playing catch-up all year.

There's also injury concerns mounting up before the season even begins. Kevin Hayes will miss a few weeks to start the year due to abdominal surgery, his second procedure of the offseason. Wade Allison, who played 14 games with the big club in the prior campaign also is out indefinitely. Sam Morin, projected to be an extra defenseman, will miss some time and Tanner Lacyznski, a promising forward who appeared in five games, will miss the season.

The Flyers haven’t missed the playoffs in consecutive seasons since the early 90s. After a letdown 2020-21 campaign, the organization did all they could in the summer to set themselves up back on the right path.

“We’re a playoff team,” Vigneault adamantly stated following Tuesday’s practice. “Chuck has made some real good changes to our team… sometimes you’ve got to change the dynamics.”

The addition of Ellis will benefit Provorov, giving him his best on-ice partner since Matt Niskanen, while Ristolainen brings much-needed physicality on the backend. The Yandle and Justin Braun pairing may quietly be one of the steadiest third pairs in the league and the former should provide a boost to a powerplay unit looking to get back its mojo.

Up front, Atkinson gives the Flyers a legitimate threat of a 30-goal scorer and a premier two-way player. There may not be as many explosive players on this roster as there are across some of the other top Metro teams, but the combination of Giroux, Couturier, Konecny and Farabee, along with James van Riemsdyk, who returned to form last season, should be enough to make the Flyers a difficult team to play against.

The Metro’s top three, which all earn spots in the playoffs, will likely consist of the Islanders, Hurricanes and Capitals. That leaves two wild card spots available for 10 teams across the Metro and Atlantic Division. If the Penguins do go through tough times this year in the absence of Malkin for a good chunk of this season, and the Rangers or Devils don’t see their youth take that next step, the Flyers have a strong chance of grabbing one of those spots, as do Atlantic foes like Boston, Montreal and Ottawa, all of whom could be on the outside looking in in their own division.

Ultimately, the Flyers will secure one of those wild card spots and set-up a date with one of the top two in the conference. That’ll be a daunting task going up against a juggernaut like Tampa Bay or Florida, potentially, so it’s imperative for the Flyers to do what they can to sneak into the top three of the Metro.