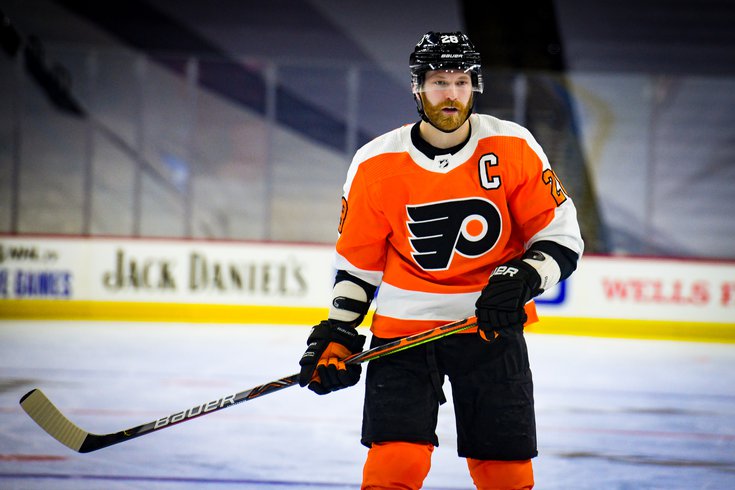 The puck drops for the Flyers, finally, Friday night against Vancouver to start their 2021-22 campaign, after one of the more consequential and active offseasons in recent memory.

We've already taken a deep look into what we expect from them this season, and if you haven't read it, we highly recommend it.

But the more you look into things, the more you see there is quite a divergent set of opinions about what the Flyers could be this season. However, the vast majority of predictions will make you shake your head in disgust. That's because, just as they've been for about a decade, Philadelphia appears to be a fringe playoff team that might be able to win a series — but that's about it. They aren't true contenders, and haven't been since their last Stanley Cup Final trip in 2010. They are back in the exact kind of limbo they have been desperately trying to escape.

Maybe Carter Hart will be a Vezina-caliber goalie again. Perhaps the offense will take a step forward and the defense will be a strength built on those offseason veteran acquisitions. But it will probably just be more of the same.

Here's a roundup of how various publications across the internet think the Flyers will perform in 2021-22:

Over at ESPN, their hockey writers took a look at the best and worst case scenarios for every NHL club (and posed other questions like who their X-factor or best fantasy performer would be), and not surprisingly, the best case isn't particularly exciting for Flyers fans.

Best case: The Flyers’ goaltending stabilizes, their defense improves and their goal-scoring ticks up into the top 10, earning Philadelphia a playoff spot in a very competitive division.

Worst case: Remember how the Canadiens made a bunch of veteran additions before last season and they added up to a Stanley Cup run for Montreal? The worst-case scenario for the Flyers is having done a similar thing and then getting the complete opposite result. Oh, and if the goaltending stinks.  [ESPN]

SI.com's Adam Poteau ranked the teams in the Metro division and the Flyers are no where near sniffing the top. Here's a look at his assessment:

6. Philadelphia Flyers: The Flyers finished the 2021 campaign with the worst defense in the NHL – a whopping 201 goals-allowed – and GM Chuck Fletcher did not stand pat and hope his team rebounded this year. Instead, he radically remade his defense corps – bringing in veterans Rasmus Ristolainen, Ryan Ellis and Keith Yandle – and he dealt winger Jakub Voracek to Columbus for winger Cam Atkinson. As well, Fletcher signed journeyman forward Derick Brassard to improve his third line, and he inked fellow journeyman Nate Thompson to center Philly’s fourth line.

On paper, this Flyers group is more experienced and more talented, but the big question – as if often is in Philadelphia – concerns their goaltending. Starter Carter Hart is coming off of a disappointing season (3.67 goals-against average, .877 Save Percentage), and their new backup, former Sharks starter Martin Jones, has not posted an SP above .896 in any of the previous three seasons. If Hart rebounds, the Flyers could push the Caps and Penguins for one of the bottom two playoff berths. If their netminding doesn’t hold up, expect Fletcher to make an in-season move to address it. With this many veterans in the lineup, Philly can’t be satisfied with simply improving their individual stats. They need results, and they need them right away. Otherwise, Fletcher’s trade finger could be even itchier next summer.  [SI.com]

The Athletic — Getting better?

The Athletic has a lot of great NHL season preview coverage, and they have metrics that say the Flyers are the 20th best team in the NHL (keep in mind 16 teams make the playoffs). They project they'll collect around 89 points and have a 32.4% chance of making the postseason.

Their Flyers beat writer, Charlie O'Connor, was asked to briefly access their outlook for the year, and he thinks they're good enough to finish second or third in the division.

Natural regression (read: the goaltending not being the worst in hockey) would have made the Flyers better this season by itself. But the roster itself is also better, with even their most controversial adds (Rasmus Ristolainen, Martin Jones) at least serving as talent upgrades over the players they directly replaced (Robert Hägg, Brian Elliott). Whether they’ve upgraded enough to be a true contender is an open question, but the Flyers should at least be better than they were last season.  [The Athletic]

FiveThirtyEight — So you're saying there's a chance?

On the heels of The Athletic's statistical projection, we thought we would pivot to FiveThirtyEight's, which says Philadelphia has around a 36% chance of making the playoffs, and projects they'll have 88 points.

NBC Sports predicts the Orange and Black will finish in the playoff picture, nabbing the final guaranteed spot in the division and slotting behind the Islanders and Hurricanes.

The hockey writers at Yahoo! provided their predictions for playoff teams, playoff winners and awards. Four writers made their predictions, with two of them leaving the Flyers out of the mix for the postseason. Steven Psihogios has them making the playoffs as the Metro's third representative, while Thomas Williams thinks they'll get the final Wild Card spot. No one has them winning a series.

NHL.com — Outside looking in

The NHL's official website did the same thing as Yahoo!, tasking 15 of their staff writers and editors with predicting the entire playoff field and who will move on. Here's how it broke down:

Yes, 10/15 have them missing the tournament. One writer, Dave Stubbs, thinks they'll actually be second in the Metro.

No big explanation needed here. The Sporting News predicted the records of every team in hockey and the Flyers are the second to last team in the Metro according to their experts.

FanDuel — Toward the bottom

And finally, if Vegas is right, the Flyers will be playing in front of empty stadiums and apathetic fans by April. The oddsmakers at FanDuel give Philadelphia a +850 chance of winning the Metro, which is the sixth best of eight teams. With three playoff slots available in the division, it's clear they think Philly will be on the outside looking in.