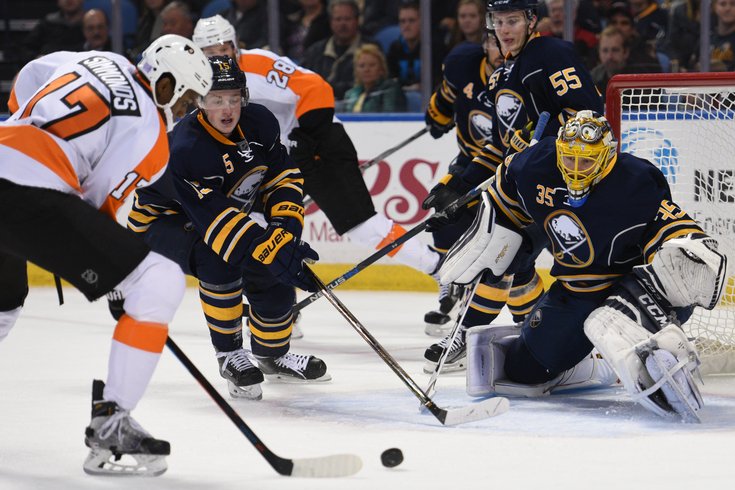 The Flyers fell to the Sabres on Friday night.

That's not the way you want to start a five-game road trip.

After falling to the Devils, 4-1, at home on Thursday night, the one thing the Philadelphia Flyers could take solace in was the fact that they didn't have to wait long for a chance to make up for their sub-par performance.

Instead, they looked more lifeless than against the Devils, falling 3-1 to the Buffalo Sabres on the eve of Halloween. From start to finish, it didn't look good for the Flyers. Several of the same issues that plagued them in their previous two losses remained problematic for first-year coach Dave Hakstol's crew.

Here's a look at what I saw in the loss:

•    Jake Voracek still doesn't have a goal. You can read more on him, here. But here's a look at how close he was to scoring early in Friday's loss to the Sabres:

•    The line changes kind of backfired. In an attempt to jumpstart Voracek and the Flyers struggling top line, Hakstol mixed up the lines against Buffalo, and didn't have much success.

They finished with 27 shots on net and were nearly shut out for the first time all season until Mark Streit scored with less than three and a half minutes left.. After scoring 12 goals in their previous three games, the Flyers have netted just two in their last 120+ minutes of hockey.

•    For the third straight game -- all losses, mind you -- the Flyers were outshot by their opponent. By the time the Sabres scored their third goal of the game midway through the third period, they were outshooting the Flyers 33-17. And even those numbers surprised me because it felt more like 75-4. The Flyers recorded just seven shots in each of the first two periods while the Sabres had 15 in the first and 16 in the second. The Flyers were able to close the gap late in the game, thanks in large part to a more defensive gameplan from the Sabres and a trio of third period power plays, and finished with a 36-28 disadvantage.

•    Special teams continued to struggle. After allowing two power play goals to the Devils -- and four in their last five games -- the Flyers didn't look much better against the Sabres. Sure, they held Buffalo to 1/6, compared to the Devils' 2/5 a night earlier, but they can't continue to allow opponents so many opportunities with the man advantage. At least there weren't any too-many-men penalties this time.

As for the Flyers' power play unit, they were 0/3 on the night and now scoreless in each of their last four games (0/9).

•  Michal Neuvirth got the start in the second game of a back-to-back for the Flyers. He played pretty well and, like Mason the night before, didn't get much help from his teammates. He finished with 33 saves on 36 shots.

The Flyers have the rest of the weekend off and will head to Vancouver to face the Canucks at 10 p.m. (ET) on Monday night.