Steve Mason no fan of NHL's new 3-on-3 OT rules ... and his teammates don't blame him 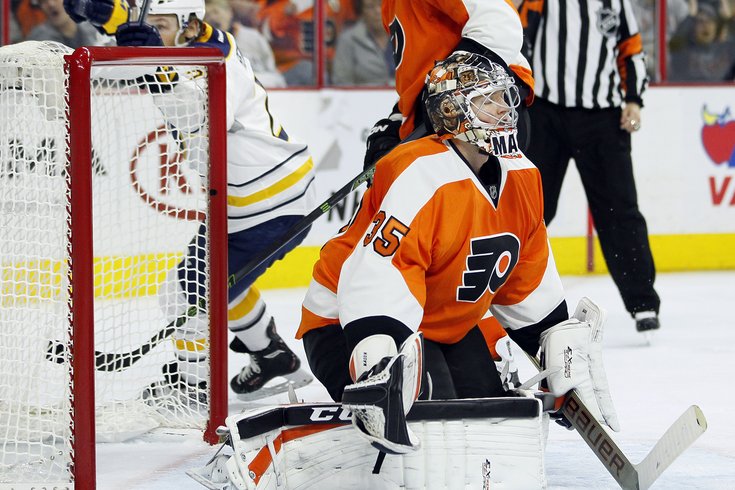 The Philadelphia Flyers have played four overtime games this season, plus two more in the preseason. And so far, goalie Steve Mason is not a fan of the new three-on-three format, one which he referred to as "chaos."

After Tuesday's 4-3 loss to the Sabres, the Flyers have lost twice and won twice (one via shootout) in overtime. And following the loss, despite winning each of their last tow games in overtime, Mason shared his thoughts on three-on-three hockey.

"It's just chaos out there," Mason said in the locker room after the game. "I made a great save coming across, and then a couple of seconds later, they're back on a breakaway. It's tough out there. There's just chance after chance, and it's creating chances. That's why so many games are being ended in overtime; there are just so many quality chances that guys just eventually score."

"I don't know [if I prefer it over a shootout]," he added with a laugh. "It's not very goalie-friendly."

So what about just ending the game in a tie?

"I don't think any goalie is a fan [of the new overtime], to be honest," Voracek said postgame. "It’s a lot of scoring chances on both sides and we had one, they had a couple, we had a couple. That’s just the way it goes sometimes."

"You know what, I wouldn't mind a tie," he said. "At least that way you might feel a little better coming out of the game."

Perhaps some of that was due to the fact that he allowed a breakaway goal to Sabres' Zemgus Girgensons. But it isn't hard to see why Mason isn't a fan of a style that is conducive to odd-man rushes and breakaways, even if it makes for a glorious five minutes of sports theater.

Forward Jake Voracek understands why Mason -- or any goalie for that matter -- would hate the new format.

"I don't think any goalie is a fan [of the new overtime], to be honest," Voracek said postgame. "It’s a lot of scoring chances on both sides and we had one, they had a couple, we had a couple. That’s just the way it goes sometimes."

Brayden Schenn -- almost the hero Tuesday night after scoring twice in the third period to tie the game inside the final minute -- was also asked about it after the game.

"Three-on-three is a game of mistakes and odd-man rushes," he said. "Our goalies are making good saves. It’s a different type of hockey. We need to be a little bit smarter and, if we have to, play for the shootout.”

Coach Dave Hakstol, however, likes the new format. And not just because it's a lot of fun to watch.

“It’s entertaining, there’s no question," he said after the loss. "I still believe it’s a better way to decide a game than a shootout. Given that, the opportunity of three-on-three is the right way to go. I’ve liked most of what we’ve done in our last couple of overtimes. Again, tonight you have a mental lapse where you drift when you don’t have full possession of the puck and it’s going to come back to hurt you and I think that got us tonight.”

But that doesn't mean he doesn't sympathize for his goalie.

“The goaltender is put in a tough spot," Hakstol added. "He has all kinds of situations coming at him that normally you don’t see on a consistent basis. But in saying that, everyone has a role to play and we all have to do that a little bit better."

So far this season, the number of overtime games going to a shootout is down nearly 25 percent. Yes, it's early, but of the 26 overtime games this year, just eight (30.8 percent) needed a shootout to determine a winner, meaning there was a goal scored in almost 70 percent of all OT periods. That's a big change from a year ago when more than half (170 of 306, or 55.5 percent) went to a shootout.

You'd think the Flyers would be in favor of that -- and they were when it was announced -- considering they've been the worst shootout team in the NHL since it was introduced. That second point can be crucial in the standings when the playoffs draw near.

After two games in which the Flyers played well enough to get two points -- their recent wins over the Bruins and the Rangers -- they came away with just one against the Sabres.

And to be honest, they were lucky to even get that.

"It’ll turn out to be a big point, I’m sure," Mason added. But it would’ve been nice to get two.”