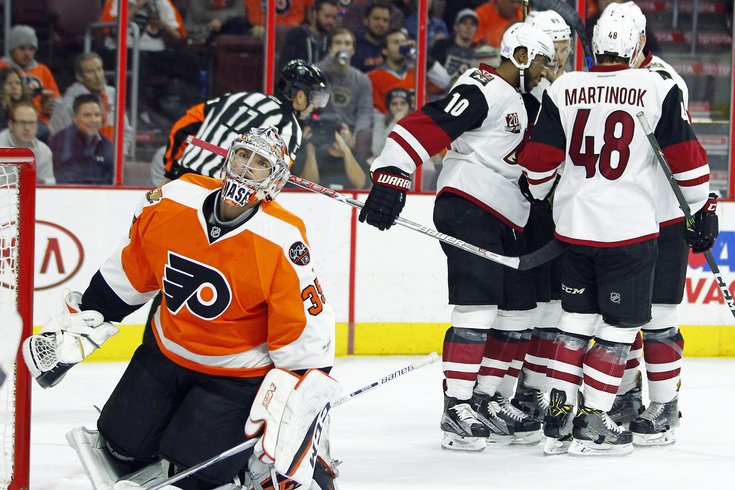 Philadelphia Flyers goalie Steve Mason, left, gets back on his skates as the Arizona Coyotes celebrate Jamie McGinn's first-period goal.

Very little in the world of sports is as exciting as a come-from-behind victory. The bigger the deficit – or the later in the game – the better.

Sometimes, the winning team gets the credit for not giving up and clawing its way back. Other times, it's the losing team that gets blamed for choking and surrendering a lead. But in either case, especially in the early stages of a season, what gets forgotten is that the team now celebrating ultimately played its way into whatever deficit it had to overcome.

That, however, is not the case for the Philadelphia Flyers. Nor should it be.

For seven straight games now, Dave Hakstol's team has allowed the first goal and been forced to play from behind. Amazingly, the Flyers have been able to draw even in all of them. More impressive yet is that four of those games saw the Flyers (3-4-1) erase multi-goal deficits.

Unfortunately for the Orange and Black, five of those seven comebacks, including their 5-4 loss to Arizona on Thursday night, have resulted in losses (one in overtime), likely because whatever energy the team spent tying it up left them out of gas late in the game.

Here's a look at those games, the deficit they faced, and the final outcome.

*Flyers scored late in second, but still faced a 4-1 deficit to open third.

That's why, when the Flyers tied the Coyotes after trailing 2-0 in the second period, it was upsetting to see so many fans celebrating the comeback. It's easy to get caught up in the moment, sure, but let's not forget that the Flyers have a real problem on their hands – a problem that starts with the fact that they've scored just one first-period goal all season (and have now gone six straight without one).

"It just can’t keep happening," defenseman Andrew MacDonald said after the loss. "Like you said, we are fortunate enough to come back once in a while, but we can’t continuously be fighting from behind."

Even for the most talented teams, it's hard to win when you're playing from behind every night.

And while the Flyers aren't that, they do have playoff aspirations. Still, it's reasonable for them to get off to slow starts against the best the NHL has to offer. Unfortunately, the bookend losses of this seven-game sample came against an Arizona team that is otherwise winless in its first seven games of the season.

But this wasn't just a poor start against a bad team, it was against a team that was wrapping up a five-game road trip in which they failed to earn a single point and were outscored 23-13.

This was a game they should've won – and very well may have, had they not fallen behind early.

Following the loss, there weren't many answers coming out of the home locker room at the Wells Fargo Center.

“We didn’t play well in the first period for a while there, but I liked the way we responded in the second period," said captain Claude Giroux, who is still looking for his first goal of the season, but did record his league-leading ninth assist of the season. "We played some good hockey. Need to find a way to play 60 minutes like that.”

That, however, is the problem. How do you fix these slow starts? It's not like the Flyers aren't capable of playing with some of the best teams in the NHL – we've seen them do just that – but how do they, as Giroux put it, "find a way to come out stronger?"

“I don’t know, we’ll address it," said Hakstol. "Tonight you know what, two nights ago we didn’t have a poor start; we played a good first period two nights ago. Tonight we were bad. We didn’t play well to start this game; we didn’t have the intensity to begin the game at the drop of the puck.  It wasn’t there. We have to address that, we have to get better.”

Again, the problem is obvious to everyone. The cause, and more importantly the fix, less so.

“We’ve talked about it, we’ve addressed it numerous times," MacDonald admitted. "For whatever reason guys are aware, we have to have better starts, we can’t keep falling behind. We need to fix it quick.”

Perhaps goalie Steve Mason, who is often on the receiving end of the first-period defensive lapses that have contributed to many of these sluggish starts, has something to offer.

“We are starting games and putting ourselves in a hole and we can’t be doing that," he said. "We say that over and over again and I wish I had an explanation for why it keeps happening. It’s not the way a hockey team should play in order to win hockey games and tonight we paid for it, and we should have paid for it against Buffalo as well.”

At least this is some progress.

Mason is acknowledging that, first, it's clearly not a sustainable model for winning, and second, they shouldn't pat themselves on the back for climbing out of a three-goal deep hole dug with their own shovels.

And in a loss like the one they suffered Thursday night, a better start by the home team could have set the game on a different path.

“I mean, you can start thinking ‘could have, should have, would have,’ but in reality, we’re just not playing good enough hockey right now," said forward Brayden Schenn, one of four Flyers to find the back of the net against the Coyotes. "We really need these two points. These are the ones we really want to have. We don’t want to be behind the eight ball again starting the season. ...

The Flyers will need to figure out quickly how to remedy the situation as they prepare to host the Pittsburgh Penguins on Saturday night. Otherwise, they risk falling further behind the rest of the pack, much like they did in Hakstol's first season.

“Yeah, it’s obviously a worrisome trend," MacDonald added. "You don’t want to be one of those teams who fall behind early on a consistent basis. It’s something that we have to continue to be aware of and really turn it around.”

Last year, they were lucky enough to sneak into the playoffs thanks to a late-season run in which they were one of the hottest teams in hockey.

But, as they're learning on a nightly basis this season, comebacks aren't easy.