Despite 37 saves, Mason 'embarrassed' after Flyers' 2-1 loss to Stars

By Associated Press and staff reports 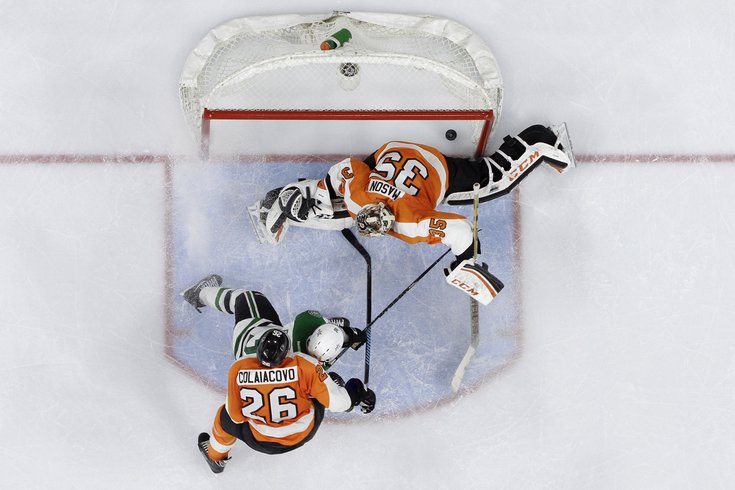 Vernon Fiddler scored the winning goal late in the third period to lift the Dallas Stars to a 2-1 victory over the Philadelphia Flyers on Tuesday night.

Brett Ritchie also scored for the Stars, who won for just the fourth time in their last 38 trips to Philadelphia.

Luke Schenn scored for the free-falling Flyers, who lost their third straight to tumble further out of playoff contention. The loss snapped a six-game home point streak for Philadelphia, which lost at home in regulation for just the second time in 13 games.

Fiddler scored the game-winner with about 6 minutes left in the third period. Colton Sceviour centered a pass from the right boards and Fiddler redirected it past Steve Mason from the goalie's doorstep to give Dallas a 2-1 lead.

Kari Lehtonen made 24 saves to earn his first career victory in 14 games against the Flyers, improving to 1-10-3. Lehtonen's best save may have come in the second period when he denied Jakub Voracek from point-blank range.

It was another blow to the Flyers, whose slim playoff chances took a major hit over the weekend. It began with Saturday's overtime loss to Boston when Philadelphia gave up the tying goal with 14.1 seconds left in regulation. That was followed by Sunday's 5-2 defeat at New Jersey.

“I don’t know what to say," goalie Steve Mason said after the game. "There’s no desperation… it’s tough to come in a room after games like that where we just needed to have a much better effort. It just wasn't there.”

Mason, who made 37 save in a losing effort, went on to tell reporters that he was embarrassed the team couldn't come away with a much-needed at home.

"I’m embarrassed," he said. "I hope everybody else is embarrassed because we have an effort like that at home in situations where we have to come up big, and we come up empty. We have to be a lot better.”

Mason wasn't the only player to question the team's effort Tuesday night.

“Yeah, it wasn’t good," winger Wayne Simmonds said. "We’ve got to have everyone on board. We’ve got to have every guy in this locker room, all 20 guys, everyone who goes out on the ice compete and play, and tonight that wasn’t there. I think Mase is right to say that. He stood on his head for us, gave us a shot, and we definitely didn’t return the favor.”

The Flyers began the day in 11th place, seven points behind the Bruins for the Eastern Conference's final playoff spot. That gap widened on Tuesday thanks to Boston's 3-1 win over the Senators.

Dallas was farther back in the Western Conference, trailing Winnipeg by 10 points for the last spot.

Schenn opened the scoring with a slap shot from the point that went over Lehtonen's glove to put Philadelphia in front 1-0 just 1:13 into the contest.

Dallas evened it at 1 with 8:37 remaining in the period when Ritchie fired a wrist shot between Mason's legs from the slot.

The Flyers had chances, but failed to convert, which only amplified the frustrations of a team slowly watching their playoff hopes fade away.

“We had so many scoring chances especially in the second period," said winger Jake Voracek, who broke his stick in frustration as the game ended. "A couple good looks in front. I think we created a lot. We just scored one goal which in this game was not enough.”

Tyler Seguin, among the league leaders with 31 goals, was playing in his second game after missing 10 due to a sprained knee. He scored two in Saturday's 5-4 loss to Tampa Bay but didn't have a point against the Flyers.

Philadelphia's recent struggles on the power play continued, as the Flyers went 0-for-3 on the man-advantage. The Flyers, who entered third in the NHL in power-play scoring (23.1 percent), have scored just once on their last 15 power-play opportunities.

“I felt okay," Lecavalier said after the game. "I didn’t skate much since the snowstorm. I think I skated three times in the last six days, so I felt okay but not great. I tried to keep it simple."

• Flyers D Nicklas Grossmann (upper body) returned after missing four games. Grossmann took a puck to the face on a second-period shot by Antoine Roussel but remained in the game.