Trade coming for Flyers in order to make room for returning Timonen? 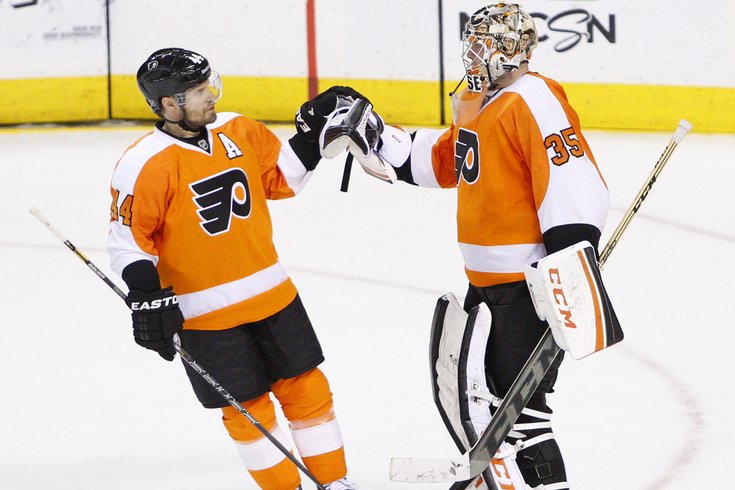 It's almost hard to believe.

Following a 3-2 loss to the Maple Leafs, the Flyers are now 2-3-1 in their last six games. Their two wins came against a pair of teams in Nashville and Washington that average 82.5 points. Their four losses -- three in regulation and one in overtime -- came against teams* that average just over 51 points each. They were outscored 15-7 in those games.

*Not just any four teams, but the four worst teams, in terms of total points, in the Eastern Conference.

Talk about a head scratcher.

On Saturday night, the Flyers will host the Rangers in what can best be described as a must-win* game. The Flyers are due, having lost all three of the meetings between the two this season, being outscored 10-2. And judging by how they've made a habit of playing either up or down to the level of their competition this season, especially as of late, it wouldn't be shocking to see the Flyers come away with a win in their first game back at home after back-to-back road losses.

*Full disclosure: I hate that phrase, but in this case, it's applicable. In fact, it will be for the remainder of the season.

In addition to playing in front of their own fans, the Flyers will get an additional boost Saturday night as Kimmo Timonen, who missed the last six months with blood clots in his lungs and leg, is expected to return to the lineup.

In order to make room for Timonen, many expected that team would waive Carlo Colaiacovo on Friday after having him as a healthy scratch the last seven games.

But that didn't happen:

#Flyers did not put Colaiacovo on waivers today. They're at 23 players. Meaning, Timonen maybe won't play tom - or another move is coming.

The Flyers will need to make a move if Timonen is to play against the Rangers. Including Colaiacovo and Timonen, they have three extra healthy defensemen -- Luke Schenn has also been a healthy scratch the last four games since Andrew MacDonald was inserted back into the lineup.

It seems unlikely that the Flyers would waive any of their other defenseman without at least trying to work out a trade first.

Timonen, who plans to retire after the season, is unlikely to be moved, since he'll only have one game under his belt prior to Monday's trade deadline. That doesn't mean a team won't take a chance on the 39-year-old vet, but it seems unlikely. Timonen said last month when he announced his intentions to return this season he hadn't "even thought about that" possibility because his sole focus was getting back on the ice.

On Saturday, Timonen could be back on the ice at the Wells Fargo Center. The question is: will he be out there when the Flyers host the Flames on Monday night?

If Timonen stays, two names that have been out there as possible trade chips are Braydon Coburn and Nick Grossmann. Both have one year remaining on their contracts and could be tempting to teams looking to add depth on defense as the postseason nears.

Roster implications aside, the return of Timonen also impacts the Flyers salary cap situation, according to Frank Seravalli of the Daily News:

Aside from the roster complication, the Flyers will also face a significant salary-cap hurdle with Timonen's easily reachable performance-based bonuses.

Timonen has been paid his $2 million salary all season. According to sources, he is due another $750,000 on his 10th game played. If he plays in all 20 of the remaining games, Timonen will earn another $250,000 on top of that, bringing his total to $3 million.

That hurts the Flyers because their bonus overages will apply to next season's salary-cap figure since they are already exceeding this year's cap limit in real dollars. The only way they squeak by on a daily basis is by operating with long-term injury exceptions.  [via philly.com]

The Flyers could relieve some of that by trading a guy like Coburn, who is due to make $4.5 million next season.

If Hextall decides to go that route, and assuming Timonen can play at or near 100 percent for the final 20 games of the season, the first-year GM could potentially improve his team's long-term outlook by acquiring a draft pick for Coburn* without giving up on a potential playoff run this season.

*Could he be worth a future first-round pick?

However, the Flyers currently sit four points behind the Bruins, who play the Devils Friday night and the Coyotes on Saturday. If they win both, the Flyers could be eight points out before the puck even drops in South Philly.

At that point, it might be time to give up on the season and start looking toward next year.

Unfortunately for Timonen, there won't be a next year.