The Flyers are trending up, but can they sustain it?

The team faces a daunting stretch of games in November. 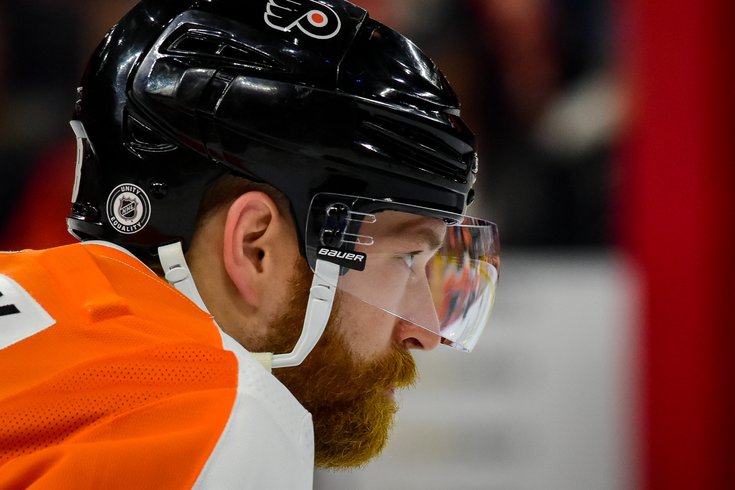 There's been a lot of reflecting ahead of Claude Giroux's 1,000th game this week.

Following his team’s 2-1 win over the Washington Capitals over the weekend, Philadelphia Flyers head coach Alain Vigneault praised his team for "the way we're trending."

At 6-2-2, the Flyers are off to about as good of a start as they could have hoped for considering the roster turnover from a season ago and the ensuing injuries to kick off the new campaign. With 10 games under its belt, the team will enjoy some days off before a grueling 21-day stretch that sees 11 games, two sets of back-to-backs and some of the strongest teams in the league.

What lies ahead for the Orange and Black are home games against the defending Stanley Cup champion, Tampa Bay, a pair of meetings with the 9-1-0 Carolina Hurricanes, a date with the Florida Panthers — who have yet to lose in regulation — and the always tough Boston Bruins, among others. And it all begins with Auston Matthews and the high-powered Toronto Maples Leafs coming to town on Wednesday.

By the end of November, the fanbase should have a much clearer sense of what exactly this new-look Flyers team is and whether or not this team can hold its own in the daunting Metropolitan Division.

With such an important stretch ensuing this team, which of the trends within this team are here to stay or just a flash in the pan?

When it comes to discussing anything involving the Flyers and their success, it typically starts and ends with the man between the pipes. So far, the combination of Carter Hart and Martin Jones has been the most dynamic in the league to the tune of a 2.40 goals against average mark, good for 6th lowest in the NHL, and a .933 save percentage.

Hart looks like he put his dreadful campaign from a season ago in the rearview mirror, which was the hope all offseason. The question mark, though, over the summer was whether or not the Flyers made the right investment when bringing in Jones after all of his struggles towards the end of his tenure in San Jose.

It turns out that Chuck Fletcher knew what he was doing when picking Jones to serve as the Brian Elliott replacement and the early returns on him are striking. No goalie in the league has a better save percentage than Jones (.950) among goalies with at least three starts. He’s off to his first 3-0 start since the 2015-16 season, and his 1.67 GAA is only behind James Reimer and Jacob Markstrom.

Will Jones keep up this level of play for the entire season? That’s doubtful, even for the most optimistic person. It’s been nearly four years since Jones played anywhere near this level, so at some point he’ll begin to regress to the mean. But even then, the Flyers version of Jones appears to be much closer to his early years in San Jose when he typically posted a .915 save percentage and 2.40 GAA.

What fans should count on, though, is Jones maintaining this strong level of play for a few more weeks. As seen time and time again, there’s not much in hockey that can counter a hot goalie, and Jones is in the zone right now. He likely will see anywhere from 3-5 starts over the rest of November and shouldn’t be away from the ice for any lengthy amount of time to the point of him cooling off.

If the Flyers are going to come out in a good position after this three-week stretch, it’ll be because of their goalies continuing to play at a high level, and for that to happen, Jones will have to stay hot and there’s no reason to believe he can’t keep this pace up for a little while longer.

The Captain has been a point-per-game player five times over his 15-year career. He last did so in the 2018-19 season when he racked up 85 points in 82 games. After 10 games this season, Giroux is putting up 1.20 points per game with five goals and seven assists up to this point. His hot start is also powered by an impressive 15.6 shooting percentage, which is a few ticks higher than he had last season.

Is the 33-year-old truly aging like fine wine or should fans expect him to cool off?

There’s no reason to believe he’ll fall off any point this year, but the rate at which he is scoring likely won’t keep up. That’s not a huge issue for the Flyers if he does drop closer to being in the range of a 0.70-0.80 point-per-game player like he has been in each of the last two seasons.

This team has enough depth and added skill in the likes of Cam Atkinson and the continued growth of Joel Farabee to thrive enough offensively if Giroux isn’t putting up a point every night. What truly can be the difference for this team is if Giroux has another 80+ point season in him. That, combined with the scoring capabilities present in first and second line — and likely third line once some of the injured guys return — would make the Flyers a challenging team to play against.

There wasn’t a doubt as to what the goal of this summer was for the Flyers’ front office. It was clear as day that the team’s biggest issues, and a good portion of the reason behind their goaltending struggles, was the poor play of their defensemen. That’s why Fletcher went out and brought in a handful of new blue-liners, including one on each pair.

Like his investment in Jones, the impact of the likes of Keith Yandle, Rasmus Ristolainen and to a lesser extent, Ryan Ellis (who has played in just three games) has already been felt. The team has also seen a surprise start by veteran Justin Braun, who already has more points this season than he did the season prior, and Travis Sanheim has made fewer mistakes this time around, both of which have further aided this team’s overall defensive performance.

Despite missing their biggest offseason acquisition in Ellis — Ivan Provorov’s partner on the top line — the defense has held its own and has done a complete 180 from where they were last season. With Ellis hopeful to return soon — an exact date remains unknown though he continues to be seen skating ahead of their practices — it’s only reasonable to expect this defense to continue getting better and move further away from their league-worst 3.52 goals allowed per game from the 2020-21 season.

They’ll certainly be put to the test over the next three weeks with the competition that lies ahead, particularly in the sheer amount of offensive firepower that will be opposite them in these next 11 games.

Among all of the early trends surrounding this team, the performance of their defense is one that bears the most weight, and one that truly feels like it’s here to stay.

A penalty kill doing its job

Only one other team in the NHL had a worse penalty kill than the Flyers last season. Fast forward to this year and they sit 15th in the league with an 82.9% success rate, which is more than 10 points higher than the season prior.

Winning and having a successful PK typically go hand in hand in this league. The top five teams last year in the category were some of the heavyweights in the NHL: Vegas, Boston, Carolina, Tampa Bay and Washington.

Sitting in the middle of the pack is proving to be good enough for the Flyers, but the unit should continue getting better. Like the team as a whole, the penalty kill is trending up and it’s hopeful that it will only grow with each game.

Heading into Wednesday’s game, the Flyers haven’t allowed an opponent’s power play to score in any of their last three games and are currently on a 14-for-16 run (87.5%) on the kill. The return of Ellis will only boost the unit, as will a player like Kevin Hayes once he is back, who led the team with four shorthanded goals just two seasons ago.

Among the 11 games ahead, five of those teams tout a Top-15 power play unit, meaning the Flyers PK will face some tough tasks. That being said, the team was a combined 10-for-12 over a three-game stretch against Boston, Florida and Edmonton, all three of which are Top 10 units on the man-advantage.

Continue to have faith in this unit moving forward because they have the potential of flipping the script from a bottom two group to being in the Top 10 by season’s end.

An unfortunate trend from the early going, injuries have reared their ugly head on the Flyers. None have been more impactful, at least from the standpoint of a player's importance, than Ellis. His timeline has remained a mystery as he originally was listed day-to-day, which became week-to-week.

The former Nashville Predators' blue-liner appears to be returning soon, though, at least the signs are pointing towards that way. It’s often not fair to label a player as injury-prone, but there’s some extra concern surrounding Ellis due to his injury history.

He’s up to seven missed games in his first campaign with the Flyers, which means he has now missed 49 out of a possible 135 games since the start of the 2019-20 season. His lower-body injury could prove to be a nagging issue all season so it’s certainly something to monitor.

So far the Flyers have held up in his absence with a 4-2-1 mark without him, but it will be tough to truly take that next step as a team if they’re without their projected first pair defenseman alongside Provorov. Getting Ellis back (and healthy) for the majority of this 11-game stretch is essential for this team in exerting itself as one of the contenders in the Eastern Conference.