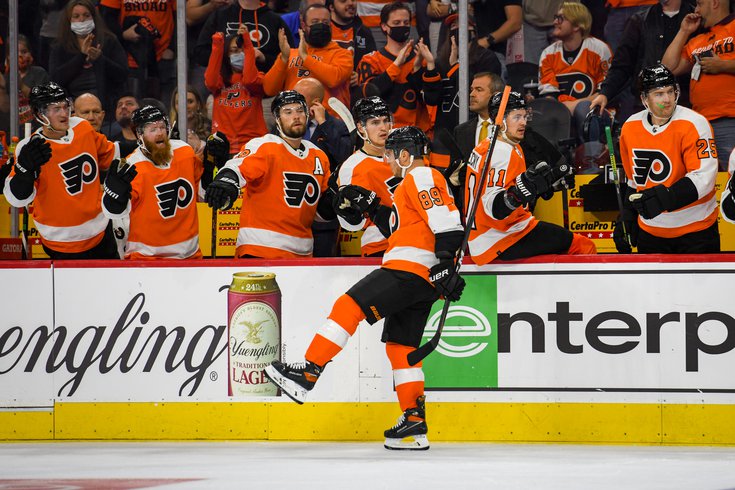 Flyers forward Cam Atkinson celebrates a goal against the Vancouver Canucks during the season opener.

One week doesn't define a season, but for a team like the Philadelphia Flyers that is littered with new faces, it can prove to be an indicator of what's to come. And after three games, it's safe to say that there are some major takeaways that should apply moving forward through the schedule.

To lay the groundwork, this is a squad that had nine additions debut on opening night and was followed up with three more acquisitions who debuted in Wednesday’s 5-3 win over the Boston Bruins in Rasmus Ristolainen, Martin Jones and Zack MacEwen. With all of these new pieces for Alain Vigneault to figure out how to manage, there was reason to doubt this team getting off to to a fast start.

That's been anything but the case as they fought back to pick up a point in the opener over Vancouver, handed Seattle its first true beat down in its expansion season and took it to a team in Boston that had their number all of last year.

With that said, here are some of the key things to takeaway from the nine periods of hockey we've seen thus far.

Not many general managers had as busy of a summer as Flyers boss Chuck Fletcher. The former Minnesota Wild GM knew he had to overhaul the roster — not just place a Band-Aid on it — and so far, all of his moves are looking smart.

Before getting into his bigger acquisitions, Fletcher’s savvy ways helped the Flyers land veterans Keith Yandle and Derick Brassard. On paper, none of them sparked a ton of joy from the fan base outside of seeing Yandle’s quest for the NHL’s Ironman streak.

Yet, those two are making Fletcher look like a genius. Yandle has collected five points over the first three games, making him just the third Flyer blue liner to do that in team history. Brassard, who was elevated to second-line center in Kevin Hayes’ absence, has filled in beautifully as the pivot alongside Joel Farabee and Cam Atkinson, both of whom have potted three goals. On his ninth team, Brassard isn't wasting time making his name here with five points already.

Then there's the big-name players in their first year here. The aforementioned Atkinson gives the Flyers a shoot-first weapon, something this organization has lacked since Jeff Carter. Ryan Ellis is bringing his reliable defense that hockey fans saw for years from him in Nashville and gives Ivan Provorov a legitimate top-pair partner, while Ristolainen was quick to show his physicality in his debut on Wednesday, giving the team an imposing threat on the backend.

This offense may be the best we've seen in years

It doesn't take a long look to realize that this Flyers team is scoring at a high rate. Through three games, the team has found the back of the net a league-best 16 times, tied with Pittsburgh who has played one more game as of Thursday.

So what's different this year? Sometimes the best offense is a good defense, and this year’s bunch have proved in the early going to be more reliable on the backend. What that does for the offense is allows more chances with the puck getting out quicker from their own zone and more opportunities for breakouts, which was seen against Boston with a few tremendous outlet passes and takes a little pressure off of the forwards in the defensive zone.

There's also young guys continuing to take strides, a la Joel Farabee and Travis Konecny, who is playing with a more shoot-first mentality than he had been the past season and a half. Claude Giroux is using his contract year to prove he still has enough left in the tank and role players like Scott Laughton and Oskar Lindblom are doing the small things to give the scoring lines plenty of chances to capitalize.

“One thing I love about this team is that we have an older team and everyone knows their role and every guy can contribute on any given night,” Atkinson said following the Boston win. “We have to continue to stay the course and stay even keel and get better every single day.”

This offense was 15th in goals last season and 16th over the past three years. The new additions and progressions from the youth should take this middling offense and make it an imposing one.

Everything mentioned above may not have been possible if not for this part. A team that doesn't have each others' backs and both an on- and off-ice connection can never go the distance. That holds true both on a macro and micro level.

How many times have fans complained about the team not playing a full 60-minute game, let alone a complete season? In the early going, the new pieces are quickly assimilating with the stalwarts on the team and the result of that has created some spectacular hockey. What Fletcher did in making it a priority to bring in known leaders from other organizations is showing its value in this regard.

“We have had a lot of guys that worn letters on other teams. I think everyone can be a leader,” Ellis explained after the Kraken victory. “We’re great, chemistry-wise and throughout the room. It’s a great start for our team.”

The club hasn't allowed a third period goal yet, outscoring the opposition 6-0 when it matters the most. The opposing team also is finding out quickly they can't coast by without any repercussions, as evidenced by Nate Thompson sticking up for Claude Giroux when a Seattle Kraken forward tried to get under the captain’s skin. More so, there's just a clear understanding evident on the ice on where the pass should go, where to position themselves in their own zone and when to take the shot.

All of that is a result of having chemistry and the teams that play into the summer with an eye on the Stanley Cup all have that in common. If anything, this has been the most important thing to see so far from this club.

Carter Hart (and Martin Jones) will be the key

Everything from the first to fourth line and the defensive pairings have come together for the most part quicker than anticipated. That should give plenty of reason to be optimistic about where the Flyers can go.

As always, though, this team will go as far as its netminders, namely Carter Hart, take it. After his worst pro season, the 23-year-old responded nicely in his first two starts of the season with a respectable .921 save percentage in the early going. For comparison’s sake, that number was at .877 last season.

If Hart gets back to his former self, which was on display with some monster saves in the win over the Kraken, the Flyers will certainly be in contention all year.

Martin Jones also held his own in his first start against Boston, quelling concerns from the fan base over him not being the correct choice as Hart’s backup. Perhaps being reunited with his former coach in Kim Dillabaugh is exactly what the doctor ordered in getting his career back on track. If Jones keeps playing like he did last night against an offensively-gifted opponent like the Bruins, there's going to be a lot to celebrate for this team.

Listen, not to toot the horn of Philly sports fans, but there's clearly something that is felt in an arena when it's packed on Broad Street. With the building roaring over the first three games, the players are feeding off of the energy and it's showing.

After his first experience as a member of the home team, Atkinson described it as “special” and “electric.” Nick Seeler, who filled in the first two games and provided the fans with an exciting fight in the Seattle win, also praised the environment that was created by the fans in attendance.

Last season, the Flyers ranked 25th in the league in home wins. The season before the world was turned upside down? First in the league with 25 wins (in just 35 home games).

Keep bringing it fans, it's not going unnoticed.