Neuvirth saves the day as Flyers beat Wild, 3-2, behind trio of unlikely scorers 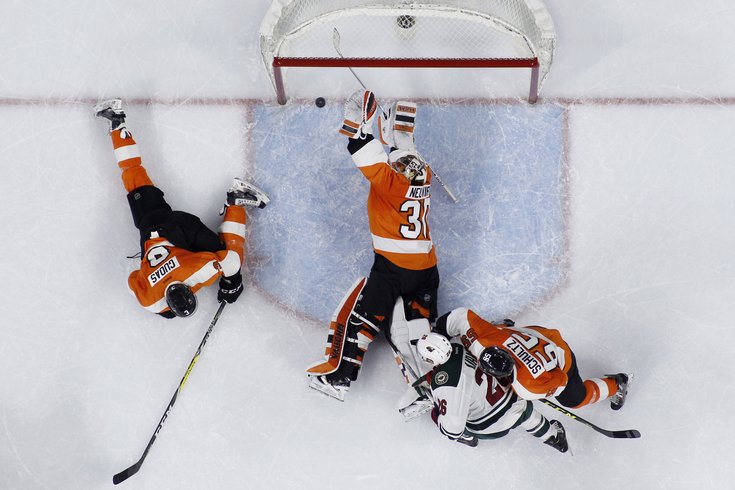 Philadelphia Flyers' Michal Neuvirth (30) blocks a shot by Minnesota Wild's Charlie Coyle during the final seconds of his team's 3-2 win.

On Thursday night at the Wells Fargo Center, the Philadelphia Flyers began a six-game home stand that Jake Voracek said would likely "define" the rest of the season. And facing a team in the Minnesota Wild that finds itself in a similar position in the standings -- close, but still on the outside looking in -- winning their fist game at home in nearly two weeks wasn't going to be an easy task.

Thanks to some timely scoring from some unlikely names and a highlight-reel performance by backup goalie Michal Neuvirth, the Flyers were able to dispatch the Wild, 3-2, and improve to 27-22-11 on the season.

The eventual game-winner came slightly over three minutes into the third period off the stick of a diving Pierre-Edouard Bellemare.

For the Frenchman, it was his first goal since December 8th and just his fourth of the season.

But it was almost for naught, as the Wild nearly scored with less than three seconds left in the game. The play was reviewed but it was determined Neuvirth is God.

SAVE OF THE YEAR pic.twitter.com/L6pJiiEJn9

Seriously. Take another, slightly longer look at that one.

That's the play everybody's going to be talking about, but here are some more observations from the game:

•    Sam Gagner got the scoring started on Thursday night, giving the Flyers a 1-0 lead late in the first period. It was Gagner's fourth goal of the season and his second in his last three games. That's good news for the Flyers, as he's a player that could potentially be dealt before the deadline.

Gagner getting greasy in the creasy. Just sending that trade value through the roof. #TastyKakes pic.twitter.com/mC0DbeOOTG

•    Gagner wasn't the only Flyer to boost his value. Mark Streit -- another player who could be part of a deadline deal -- also scored for the Flyers. His goal came on the power play, the Flyers' first of the game.

Dear @TBLightning. May I interest you in one Mr. Mark Streit? #TastyKakes pic.twitter.com/2jN7PDcFHN

For Streit, it was his fifth goal of the season, and his first in nearly six weeks.

•    Speaking of the deadline, there were plenty of NHL scouts in attendance Thursday night.

•    What that means for GM Ron Hextall and the Flyers remains to be seen. He's said multiple times recently that he doesn't expect the Flyers to be buyers at the deadline. But considering they're still very much in the playoff hunt, he may not be willing to sell a ton of pieces either.

They don't have a game against one of the teams standing between them and a playoff spot until March 15 against the Red Wings -- and they only play once more before Monday's deadline -- so Hextall and Co. may be doing some scoreboard watching over the weekend. On Thursday night, the NHL scoreboard was very kind to the Flyers. The Devils, who were four points up heading into play, lost to the Blue Jackets and are now just two points ahead. The Hurricanes, who beat the Flyers 3-1 on Tuesday, lost to the Maple Leafs, 2-1, and sit just three points in front.

•    Neuvirth got the start for the Flyers. He stopped 24 of the Wild's 26 shots, including the one above and this one in the first period.

What a recovery by Neuvirth pic.twitter.com/N32M0Ct8Fa

Sure, it was partially his own fault for overplaying the puck in the first place, but it was still a nice recovery. Also, is it me or did Shayne Gostisbehere get a piece of that shot and slow it down just enough for Neuvirth to be able to get back in position?

The Wild's first goal came on the power play, and wasn't really Neuwirth's fault. Their second goal almost looked like another power play, as the Flyers defensemen -- Radko Gudas and Brandon Manning -- just kind of sat around and let Mikael Granlund tie it up at 2-2.

•    Overall, the Flyers finished 2-for-3 on the penalty kill against the Wild's 17th-ranked power play unit (18.1%). That included a critical stop in the third period with one of their best penalty-killing forwards, Sean Couturier, in the box. You can thank Andrew MacDonald and Neuvirth for that one.

AMac and Neuvy combine to make the save of the night https://t.co/UgulJN0bu8

As for their own power play, the Flyers finished the game 1-for-1.

•    Gostibehere failed to record a point for the second game in a row after his 15-game point streak came to end Tuesday night in Carolina.

•    Captain Claude Giroux remained sidelined for the Flyers with an upper-body injury suffered last Friday night against the Canadiens.

“No update on Claude, but we will practice tomorrow," coach Dave Hakstol said after the game. "We have a 1 o’clock game, so we’ll have a light skate tomorrow just to make sure we’re ready to go.”

R.J. Umberger and Evgeny Medvedev were the other scratches for the Flyers.

Their 3-2 win over the Wild was the first of that aforementioned, and very important, six-game home stand for the Flyers. Here's a look at the remaining five games:

The Flyers will then head to Florida for another game against the Lightning, followed by one against the Panthers.