'Disgusting...' 'unbelievable...' and other reactions to Neuvirth's game-saving stop 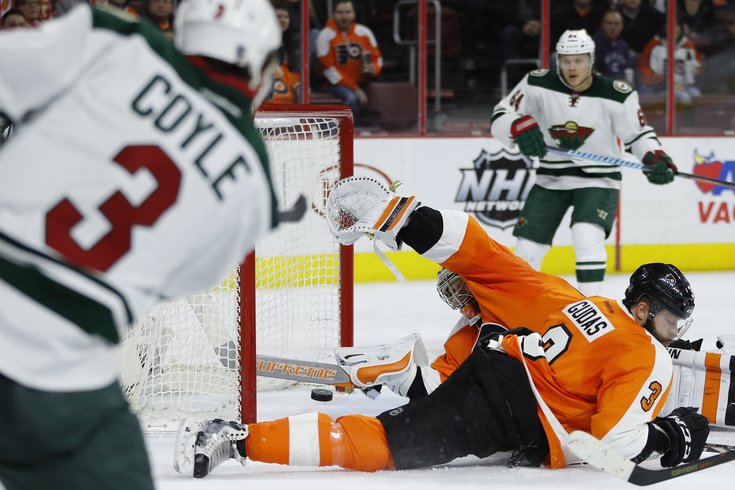 Michal Neuvirth's diving save in the final seconds of the Philadelphia Flyers' 3-2 win over the Minnesota Wild on Thursday night was a thing of beauty that left anyone watching the game momentarily speechless.

It was the No. 1 play on SportsCenter's Top 10, but if you haven't seen it yet, take a look for yourself.

I'll give you a moment to compose yourself. ... Good? Good.

Once those watching had a minute to catch their collective breath, there was no shortage of adjectives and expletives being thrown around to describe the save that they had, by this point, watched no less than 10 times each. Seriously, if you made it to the end of this paragraph without re-watching it, you should probably see a doctor.

After the game, nearly every player made available to the media was asked about Neuvirth's save. Here are some of the best reactions.

“It’s unbelievable. It was a disgusting save. It was one of those things that saves the game for us. It’s a huge save by Neuvy [Michal Neuvirth]. I thought the guys responded well tonight.”

“It was a hell of a save. I think that goes without saying especially when you add the time and the way he was able to fight that puck off. It didn’t look like the puck crossed the line I guess from the bench. Until you look at it on video, I mean there’s no way to tell for sure. It was a heck of a save in a great time in the game.”

*Coyle took the shot on Neuvirth

"That’s a heck of a save. That would’ve been a huge point. Another half inch, and that’s a huge point for us. ... That’s crazy. It’s a game of inches."

"It’s hitting, I think and [Coyle] kind of fumbled a little bit but then he got a pretty hard shot on it and I thought 'Oh, that’s gotta be in.' And he made an unbelievable save. That’s highlight-reel. Obviously it saves the game.”

"That’s still hard to believe, that save, two seconds left and to make that kind of save, I mean, thank God. ... I just heard everybody yelling and I looked at the replay and I see that, I’m like ‘Oh, wow.'”

“Got to give him [Neuvirth] credit for the save he made. Close is not good enough. ... I mean Chucky [Coyle] hammered the puck, there’s nothing else he could do. It was just a great save."

“I just think that their goalie was really good tonight. He made a couple of really big saves there that I think we should have been playing into overtime.”

And, of course, what was the reaction of the guy who actually made the save?

"Especially with the timing, it’s got to be one of the best saves I’ve ever made for sure."

But Neuvirth admitted that he wasn't immediately certain whether or not he kept the puck from crossing the line.

"I wasn’t sure [right away if it had gone in]," he said after the game. "I knew I hit it with my stick but I wasn’t sure if I had the stick behind the goal line. You know, I’ve had saves like that time to time in practice."

This, however, wasn't practice. It was in the final seconds of a game in which the Flyers desperately needed two points. And during the review, one which confirmed his save, Neuvirth saw a replay or two on the big screen and felt much more confident in the fact that he had just preserved the win.

"On the first replay I wasn’t sure," he added. "But when they showed the different angles I knew right away that I made a save."

Now, let's take a look at some of the best reactions from fans and media:

Neuvirth saves the @NHLFlyers season for now. Time to keep it up boys. #Jam

It's not often I'm left speechless but here we are. That was an increase save by Michal Neuvirth.

Michal Neuvirth impregnated an entire region tonight. Might be some sort of world record.

If somehow, someway the Flyers make the playoffs, that Neuvirth stick save is the new "shootout vs. the Rangers."

Damn Michal, at it again with the save of the year.

You've heard the term "game-saving stop" -- look it up in the dictionary, there's a picture of that Neuvirth save. Amazing.

"We don't need a wall, we have Michal Neuvirth" - Donald Trump, probably