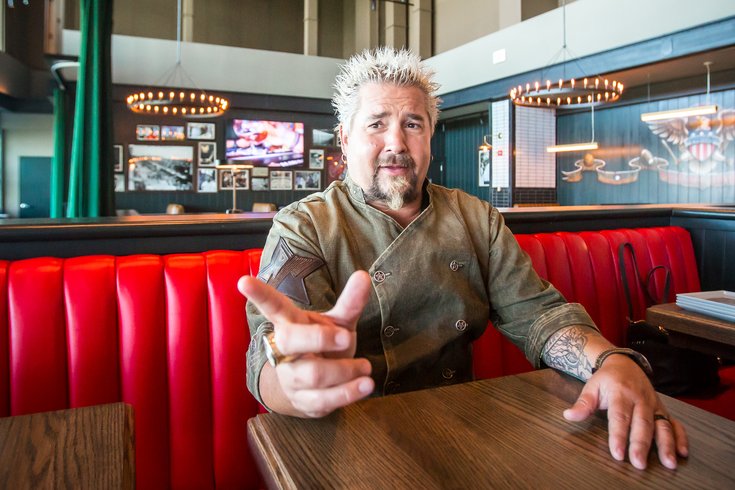 Guy Fieri, discussing his restaurant at Harrah's Casino in Chester, PA in 2017.

Guy Fieri, host of Food Network’s “Diners, Drive-Ins, and Dives” and general eater of every food imaginable, has been spotted making his way through Wilmington, Delaware's restaurant scene this week.

Fieri is believed to be in town scouting and filming potential spots for an episode (or maybe episodes, plural?) of his hit series, according to Delawareonline.com.

The show, often shortened to “Triple D”, highlights the best hidden gems and local favorites, normally slotting into one the three titular categories: a diner, a drive-in, or a dive bar. Fieri also hosts "Guy's Grocery Games" on the Food Network.

Fieri’s trademark red Camaro convertible, which is featured in each episode, was spotted outside a handful of restaurants around Wilmington, including The Farmer & The Cow, Stoney’s Pub, Luigi Vitrone’s Pastabilities, and Mrs. Robino’s, Delawareonline reported.

A public relations manager for the Food Network told the Delawareonline that multiple locations are considered in each city the show visits, but couldn’t provide any guarantees or specific information.

Somehow, Fieri’s show has never visited a restaurant in Delaware. According to the website “Diners, Drive-Ins, and Dives Locations”, which documents each stop Fieri has made during the series, Fieri has visited more than 1,100 restaurants in 375 cities, including trips to Cuba, Italy, and Spain.

The show has yet to feature a restaurant from Delaware, South Dakota, North Dakota, or Vermont, although it seems that list might be changing soon.