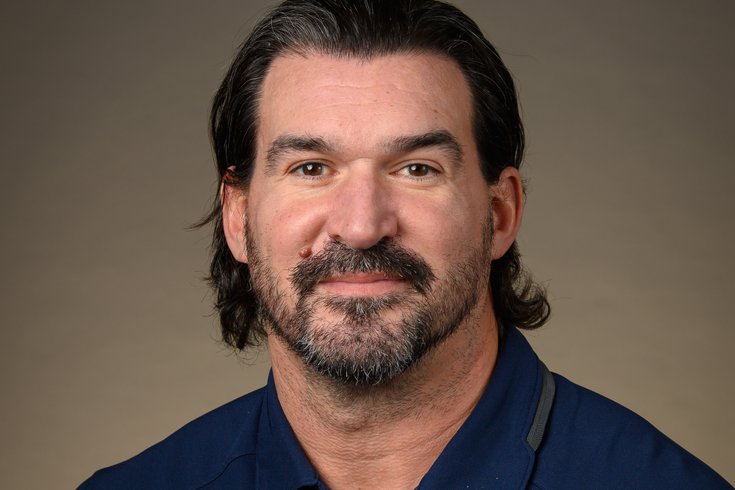 Gabe Infante gives Penn State a boost to the Philly area as a new addition to the coaching staff.

Gabe Infante’s face is certainly recognizable in the Philadelphia area for high school football. The former St. Joseph’s Prep head coach took the Hawks to national prominence in his nine years there, winning four PIAA state championships. He went 91-23 overall and was 40-1 in his last three years and winning the 2018 national Don Shula High School Coach of the Year award.

The legendary Prep coach is a new addition to James Franklin’s staff at Penn State. Right now, Infante’s listed on the official Penn State football website as offensive/defensive analyst & analytics coordinator with a bio that consists of a head shot and nothing underneath.

In the time Infante, 49, was at The Prep, he made a seismic impact. In the three years he was at Temple under previous head coach Rod Carey, he developed players like running back Re’Mahn Davis into a threat, and now under Franklin, Infante is starting a new role that will give Penn State an impact in local recruiting again.

No one has looked at Philadelphia area high school football the same since Infante arrived.

He will be working more in support of the defensive staff, with Nittany Lions’ defensive line coach John Scott Jr. and Penn State’s new defensive coordinator, Manny Diaz, the former Miami head coach who has a lasting relationship with Infante and was hired by Franklin December 11, 2021, after previous defensive coordinator Brent Pry took the job as head coach at Virginia Tech.

Infante will be allowed to recruit and reestablish the foothold Penn State once held in the area.

There was a time when legendary Penn State coach Joe Paterno would just need to show his face and have a prime high school player sign with the Nittany Lions. But as the Delaware Valley area has expanded its football prowess, the Nick Sabans, Ryan Days, and Jim Harbaughs of the college football world have descended on the area, poaching players that traditionally used to go automatically to Penn State.

Since Paterno left and with changing times, the Penn State stranglehold on the Delaware Valley area loosened considerably. The addition of Infante could bring that back.

“I have 23 years of high school coaching experience, 13 in North Jersey and 10 in Philly, and obviously everything we accomplished at Prep helped grow relationships to coaches in Western Pennsylvania, Ohio, North Jersey, the DMV, places where we were fortunate enough at The Prep to go play, and that has opened doors,” said Infante, who was hired by Penn State in February. “Over the last months, I’ve been able to connect Penn State with coaches in North Jersey, Philadelphia, and tried to help build those relationships. That’s my wheelhouse and I’ve really been lucky with that. The coaching carousel is kind of crazy. I didn’t come here with any false pretense, or promises, or guarantees that I would ever be on the field coaching.

“It’s not why I came here. I came here to work with Coach Franklin, at a premier program like Penn State, and to work with Manny, who I never got a chance to coach with when he took the Miami job (after accepting the Temple job in December 2018) and be surrounded by so many talented coaches, to learn and grow and at the same time provide value where possible.”

When Diaz initially took the Temple job, one of his first hires was Infante. Formerly the defensive coordinator at Miami, Diaz opted to leave Temple when the Miami head coaching job was offered. When Carey took over in January 2019, he retained Infante.

“Manny and I are similar in a lot of ways, we bonded very quickly, and he respects my opinion, it’s been great,” Infante said. “Being at Temple under coach Carey was an invaluable experience. It’s like high school was a lifetime ago. I always said the two toughest things for me when I made the jump from The Prep to Temple was the language and the schedule. Going into my fourth season of college coaching, and when I have that alignment, I see the things that I’m capable of doing. The time at Temple was tough. I was feeling my way around. I was trying to figure things out.

“Prioritizing was really hard for me at the beginning. At Penn State, I’m going to be allowed to step back without the primary responsibility of putting together a practice plan, or an install, or manage a room with the player’s academics. I can take a step back and be more supportive and focus more on recruiting.”

Infante has spent his life in the footprint of football. Many players he once coached are now coaching.

“Relationships and trust are everything, and the ability to make decisions on guys with people who trust and know you is critical,” Infante said. “I have a lot of guys that I know in the Philly and North Jersey areas and those relationships mean everything to me. Building and maintaining relationships is what I’m about. I know the great tradition of Penn State football.

“I hope I have a great impact on kids coming to Penn State. I feel the same way about Penn State as I do about North Jersey and the way I felt about Philadelphia at The Prep. To me, there is no other place in the country to have to go recruit. If our guys stay home, we’re as good as anyone in the country. I’m tired of watching other teams play with guys from our area. That is a passion for me. I got into coaching, because I wanted to serve the young men in our area where I grew up, and where I lived, in Philadelphia, in South Jersey, in North Jersey. That’s home. I want to provide opportunities for those young men at a special place like Penn State.”