With no answers, a call for a second-look autopsy on toddler

'It is just sad, very sad. We keep thinking we'll wake up and the baby is going to be here," said a neighbor 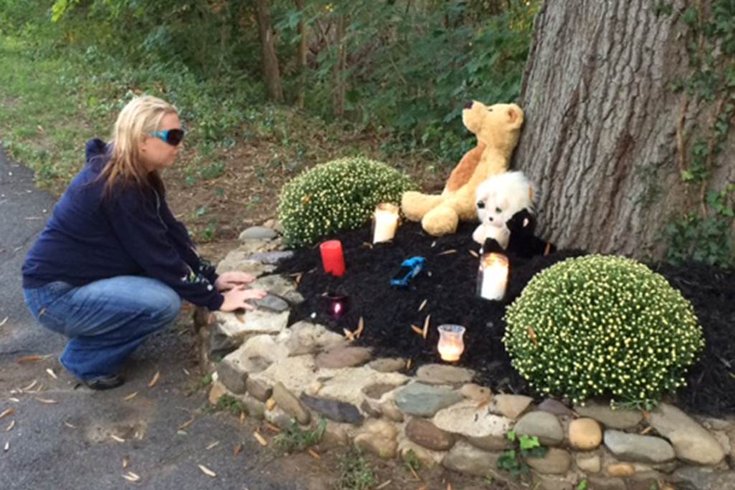 A Collingswood woman, who asked not to be identified, prays at a memorial Friday morning for three-year-old Brendan Creato, whose body was found in the woods in Haddon Township on Monday morning.

Investigators are seeking a second opinion and a review by the State Medical Examiner's Office, according to a source familiar with the situation.

In large part that’s because fundamental questions about his death remain publicly unanswered with the results of an autopsy called inconclusive.

Investigators are seeking a second opinion and a review by the State Medical Examiner's Office, according to a source familiar with the situation.

The questions nag at a neighbor of the boy’s apartment building along Cooper Street in Haddon Township.

“I’ve lived here 27 years. I’ve never seen it like this,” said Bobbie, who didn't want to give her full name.

She wiped away tears that begin as soon as she was asked about the toddler who lived a few doors away.

“This is a neighborhood of kids. They are usually outside. But people are scared. They aren’t letting their kids out. They are walking their kids to school,” said the woman, adding that the Creatos have lived in the apartment building for a little less than a year.

For now, the Camden County Prosecutor’s Office has no new information to release ahead of the weekend, the initial autopsy examination inconclusive, further tests such as toxicology still pending.

The primary questions are few and simple:

• How did a three-year-old, reportedly wearing just pajamas, get from the supposedly double-locked second-floor apartment he shared with his father, David “D.J.” Creato, to a location a half a mile away?

• How does a toddler walk away in the middle of a low-50-degree night, past block after block of homes spookily decorated for Halloween, then down an unlit embankment and finally into the woods of Camden County’s Cooper River Park?

• If the child walked away by himself overnight, sometime between Monday evening and about 6 a.m. Tuesday when police were first called, how did no one notice?

• If the child did not get to the woods by himself, how did he get there? Who took him?

• If the child did not die of natural causes, what killed him?

• Finally and worst of all: Who might have killed the little boy? And why?

Bobbie said while there’s been lots of speculation and few facts, she and everyone else she knows agree on one thing: There is no way the child walked alone from the apartment to where his body was discovered a half mile away during a dark cool night.

At one of several memorials to the little boy erected in Haddon Township – there are three at Cooper River Park, one at the apartment building – a woman from neighboring Collingswood, who identified herself only as Tina, knelt and prayed aloud while a man waited for her in an idling car on South Park Avenue.

“I felt I needed to do this,” she said as she stood next to the memorial of stuffed animals, small toys and candles, choking up.

Out of the window of the car, the man shouted: “Something is not right here. Not right.”

Both said they cannot imagine a child walking this far in the dark, alone. 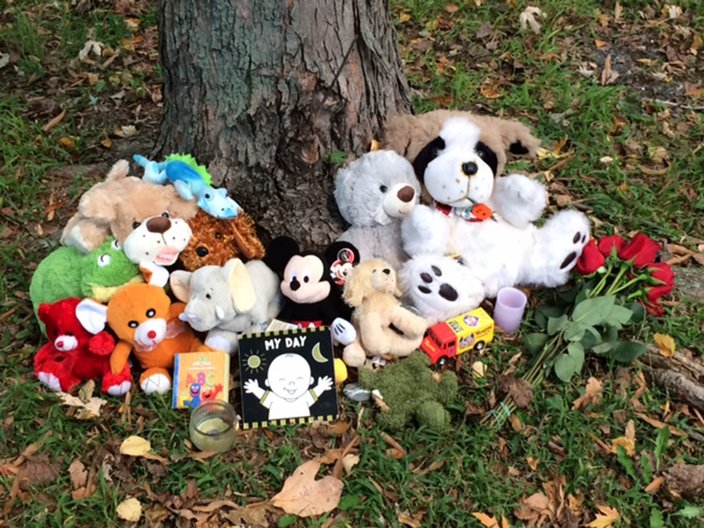 A woman named Barb who had participated in the search for the little boy on Tuesday morning stopped to talk, then choked up, tears welling.

Then she excused herself, saying she couldn't speak.

Jane Pipes, 77, who has lived across from Cooper River Park for 20 years, arrived home at 8 a.m. Tuesday in the middle of the search for what at first was simply a missing child alert and saw it unfold.

The hunt for the boy began at about 6 a.m. when the boy’s father called police to calmly report his son was missing from the apartment. The dad shared custody with the boy’s mom, Samantha Denoto, who lives elsewhere. Neither could be reached Friday.

Overhead, law enforcement helicopters hovered above Haddon Township, which Pipes called “peaceful, congenial, economically diverse, the sort of place where neighbors support each other,” without intruding.

She said she got a “spooky feeling” about the early word that the little boy had likely wondered away from home in the dark.

At first the search was mostly firefighters, peering over fences, combing through backyards, but more volunteers kept arriving, said Pipes.

“It was as if the entire town descended and wanted to help. It was quiet. Concentrated. Most of the search was near the apartment."

Then the boy's body was discovered in the woods across the street from her home.

“We were all so devastated,” she said.

Pipes watched the K-9 officer pull up, followed by a black car. About six men walked “off into the woods.”

That’s when Pipes noticed the copters had already stopped hovering.

“Then the people in the woods started running. They started blocking off the woods and the street with tape labeled ‘crime scene.’”

“And that’s when one black Ford SUV after another, filled with men in dark suits, started arriving,” she recalled.

She said she’s heard detectives have been back, retracing possible routes from the apartment building to the woods.

In her neighborhood, she said the general feeling of fear has lessened. That’s because parents near her don’t believe the child died at the hand of a random killer.

Bobbie, the woman who lives a few doors down from the Creatos' apartment, summed up the mood of her town, which is celebrating its 150th anniversary this year:

"It is just sad, very sad," she said. "We keep thinking we'll wake up and the baby is going to be here."

She wiped away more tears.

Anyone with information about the boy’s death can contact Camden County Prosecutor's Office Detective Michael Rhoads at 856-225-8561 or Haddon Township Police Detective Don Quinn at 856-833-6208.