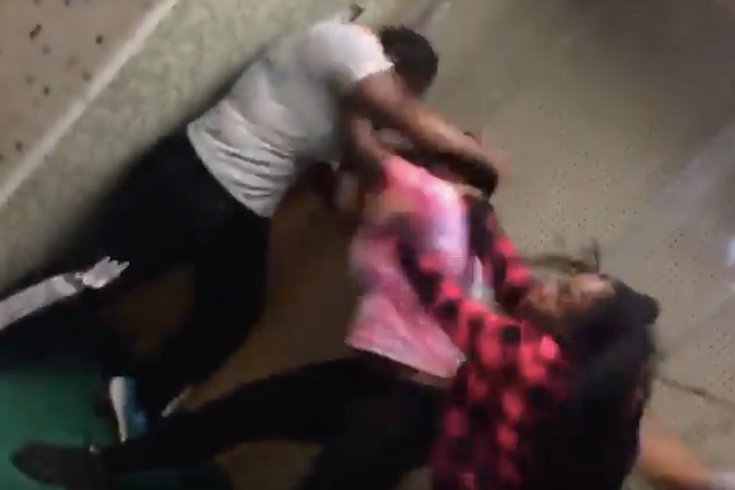 Girls fight at Cheltenham High School on Wednesday morning. Several teachers were injured trying to break it up, reports said.

Cheltenham High students Amber Lewis, 18, and three juveniles were arrested on charges that included assault and reckless endangerment, The Smoking Gun reported. Lewis, who was charged as an adult, is being held in Montgomery County jail in lieu of $10,000 bond. Two of her sisters are among the juveniles charged in the fight, which began as students were headed to first period classes around 7:30 a.m. at the Wyncote school.

The melee, filmed by several students, started with two girls fighting, then two others joined in, one video shows. One woman teacher apparently caught a blow that knocked her to the floor.

The principal of the 1,500-student school, Raymond McFall, sent a letter to parents on Wednesday about the incident, noting the district will not tolerate fighting or “the filming of fights.”

In a statement on its web site Thursday, the district said: "It goes without saying that the violence that transpired on Wednesday is intolerable and heart-wrenching. Such behaviors do not represent the larger student body community."

The full message to the school community follows:

DISTRICT STATEMENT REGARDING MAY 3 HIGH SCHOOL INCIDENT: The district's primary concern is the immediate safety of our students and staff. Cheltenham High School is taking the following concrete measures to maintain a safe environment on the heels of yesterday’s disturbing altercation:

• Additional personnel are on site at the high school and will remain in place this week and next week. "Their focus will be to ensure that school rules are being followed and that the school environment is conducive to learning

• Counselors are available to work one-on-one with students and faculty members who desire emotional support in the aftermath of yesterday’s incident.

• A series of rolling meetings are being conducted today by Dr. Raymond McFall, the High School Principal, to discuss expectations regarding school culture, climate and student conduct.

It goes without saying that the violence that transpired on Wednesday is intolerable and heart-wrenching. Such behaviors do not represent the larger student body community. The District will impose severe sanctions on abuses of our code of conduct and will actively follow through with concrete measures, like the ones listed above, to ensure a healthy school culture for all.