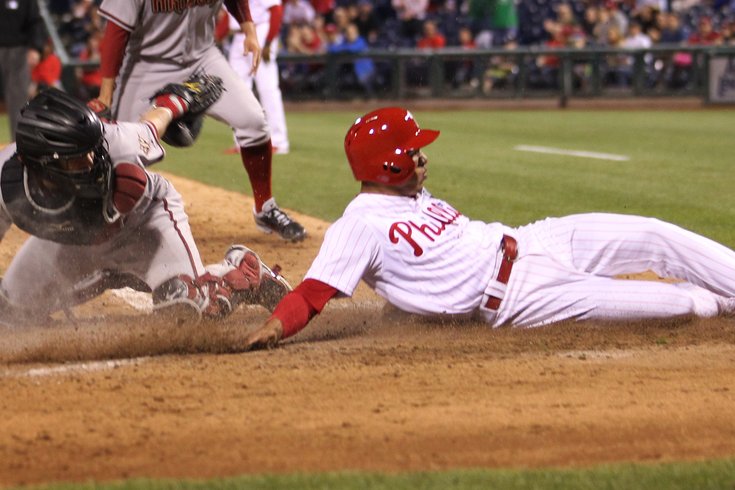 Phillies' Cesar Hernandez slides past Arizona Diamondbacks catcher Tuffy Gosewisch to score on a single by Freddy Galvis in the seventh inning.

Pinch-hitter Jeff Francoeur delivered a go-ahead single in the seventh inning to help the Philadelphia Phillies beat the Arizona Diamondbacks, 4-3, Friday night for their first three-game winning streak this season.

Freddy Galvis hit a tying, two-run single before Francoeur came through. Elvis Araujo (1-0) retired the only batter he faced in relief to earn his first major league win and Luis Garcia tossed two scoreless innings for his first career save.

After Arizona took a 3-1 lead in the seventh, the Phillies rallied in the bottom half. Carlos Ruiz and Cesar Hernandez hit consecutive singles off Daniel Hudson to start the inning. Oliver Perez entered and threw a wild pitch to advance the runners.

After Perez struck out Ben Revere, Galvis hit a single to left-center to score two runs. Galvis advanced to second on a throw to the plate and went to third on center fielder A.J. Pollock's throwing error.

Enrique Burgos replaced Perez and Francoeur hit a single down the left-field line. He was thrown out trying to stretch it into a double.

The Diamondbacks scored three runs with two outs in the seventh to take a 3-1 lead. The Phillies went ahead 1-0 on Ryan Howard's RBI double in the sixth.

Pollock hit an RBI single off Justin De Fratus and Paul Goldschmidt followed with a two-run double to deep center.

The Phillies had runners on second and third with no outs in the sixth after Howard's double. But Anderson struck out Maikel Franco. Andrew Chafin entered and retired Chase Utley on a shallow fly and Odubel Herrera on a bouncer to the mound.

Diamondbacks: 3B Yasmany Tomas was scratched from the lineup because he was sick. 2B Aaron Hill also is battling an illness.

Diamondbacks: RHP Archie Bradley will make his first start since suffering a right sinus fracture on a ball struck by Colorado's Carlos Gonzalez on April 28. The rookie is 2-0 with a 1.80 ERA in four starts.

Phillies: RHP Jerome Williams (2-3, 5.21 ERA) tries to rebound from consecutive poor starts. Williams has allowed 10 earned runs in 10 innings in losses to the Braves and Mets. He's 4-4 with a 3.54 ERA vs. Arizona.