Free agency and the Philadelphia Union: A look at all available players 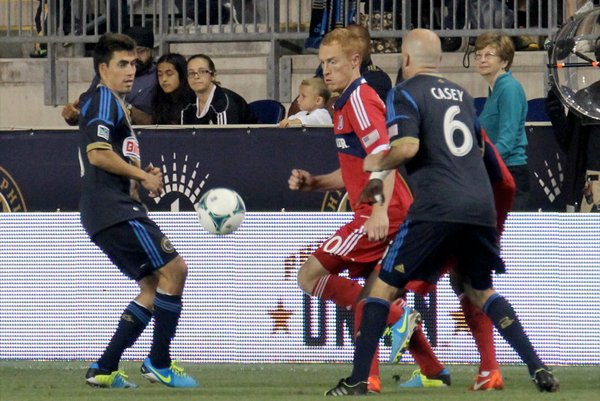 Free agent midfielder and center back Jeff Larentowicz was a Union target in 2015.

Among those is free agency, which only began in 2015 after the player's union won that right in collective bargaining. They didn't go far enough, in my opinion, and ended up with a bit of an "entry-level" type of deal that can be built upon a few years down the road.

As it stands, you're eligible for free agency only if you are 28 years of age with eight years of MLS service.

That's a tough threshold to meet, and usually means that the list of available players will be comprised of aging veterans on the wrong side of 30.

You do, however, get some guys at age 28 or 29 who have a ton of domestic experience and can still contribute. Drew Moor was a fantastic free agent signing for Toronto FC. Bobby Boswell was re-signed before even hitting the market, which was the result of looming free agency providing more leverage in contract negotiations.

This year, the list is a bit stronger, and there are a couple of possible Union targets.

Here's a rundown of the names:

There were some rumors floating around that Alston might go to Vancouver, but that looks to be dead with the Whitecaps' trade for Sheanon Williams.

Alston is a veteran fullback, a former all-star, and cancer survivor. He's still just 28-years old and worth a spot in the gameday 18, even as a backup.

A section of Union fans have been pushing for a Corey Ashe signing for three or four straight years.

He's another former all-star fullback, and would provide a good depth option behind Fabinho on the left side of defense. Ray Gaddis is currently the backup in that spot. I'm just not sure if the Union go for more fullback depth with Gaddis able to fill in on both sides.

Barnes was a defensive utility man for New England. The 29 year old can play a bit of fullback and center back and filled a variety of roles for Jay Heaps.

Hard to believe that he's only 31-years old, right?

Barrett scored two goals in 20 games for San Jose this year. He'll be looking to join his 7th MLS team.

Beasley is an interesting name.

Even at age 34, he was one of the best left backs in Major League Soccer. He earned a ton of money at that position, so I really don't know where teams would begin in contract negotiations. He's a guy who can probably play two or three more years, and he's a former Jim Curtin teammate.

I'm really intrigued to see where he ends up.

If he wasn't 35-years old and coming off Achilles surgery, I would take the two-time MLS Cup winner in a heartbeat.

Years of experience at right back for the LA Galaxy and DC United.

Philly doesn't need a right back, but I can see plenty of other teams that would look to sign him.

Goodson had season-ending back surgery this summer.

He's a fantastic center back when healthy, but I don't know if an oft-injured 34-year old does anything for the roster.

God bless Gordo for contributing to the LA Galaxy at age 35. I can see him returning on a one-year deal.

The veteran center back is a good third choice at this point in his career. At age 33, he can still contribute some meaningful minutes to a team that needs defensive depth.

The Pennsylvania native is probably the most realistic center half target in free agency. He's only 31-years old and he's a bit of a late bloomer, with most of his MLS minutes being earned in just the last three years.

Horst is 6'4" and physically dominating. He won't win a footrace but could be a good complement for a more mobile guy like Josh Yaro.

Johnson would be a very nice addition for Philly. He can slot in as a number eight and provide a good blend of ball-winning ability and distribution. You can also give him a role in a 4-4-2 next to Alejandro Bedoya, or use him wide in a pinch.

He isn't a ball mover like Vincent Nogueira, but he's a better passer than Warren Creavalle and using him as a number eight allows Bedoya to assume Tranquillo Barnetta's vacated CAM spot.

At this point in his career, he's a good number two option in goal.

A creative midfielder and former all-star.

Labrocca didn't get much playing time in Chicago this year. I don't know if he can play his way into a starting lineup in 2017.

He won't come back to Philly.

Seba wasn't happy about the mid-season trade and both sides have moved on for good.

That said, he played his way into a very good Colorado side, and had a good spell at the tail-end of the Rapids' season. He's still only 32-years old and he'll contribute good minutes for somebody next season.

I would have loved to see Lenhart in a Union kit a few years ago, but injuries have kept him off the field for two straight seasons.

Best case scenario? Someone can patch him up as a reclamation project and hope that he pulls a 2016 Chris Pontius.

He's not a great fit for the Union system.

I'm not sure how he's only 32-years old. It feels like Magee has been around forever. He contributed six goals and four assists in 1,467 minutes for the Galaxy this season.

Mapp is going into his 16th MLS season, which is incredible when you consider that he's just 32-years old.

He joined Kansas City last year, becoming the first free agent signing in league history. Mapp struggled with injuries this season and barely saw the field, all while costing KC $225,000 against the cap.

I'd take a chance on Javi, but I can easily see him joining Oscar Pareja at FC Dallas. They need a bit of depth heading into the CONCACAF Champion's League, and Morales brings that, plus plenty of continental experience.

Myers was a key piece to those trophy-winning Kansas City teams in 2012 and 2013.

He suffered a bad Achilles injury in 2014 and hasn't played much since, but he's still on the good side of 30 and will get scooped up by somebody in free agency.

The speedy winger had a good year in Montreal and is likely to re-sign with the Impact.

Age is starting to catch up to Olave, who was one of the best center halves in MLS for years. He's got a ton of experience and he's won trophies in this league, but I don't know if anybody is making a play for him at age 35.

He missed a chunk of 2016 with a hamstring injury, then came back to contribute some meaningful minutes for the playoff-bound Rapids.

Pappa is only 29, so that's a positive here. He can still pull off the creative play in the midfield, and he can definitely contribute to a number of teams. I don't know if he's a Curtin or Earnie Stewart type of player, but I can see him playing good minutes in 2017.

A career-high six goals and one assist for Peterson in 1,500 minutes this year.

He's been a favorite of Peter Vermes in Kansas City and fills a variety of roles, playing both as a striker and a wide player. I can see him returning to Sporting in 2017.

Seven teams in 11 years for the veteran utility player.

Sturgis had a good run in Houston under Owen Coyle, but didn't appear for Seattle in 2016.

He's still only 29-years old and might be a decent signing for one of the expansion teams.

I liked Wahl as a re-entry target a few years ago, but the front office didn't listen to me.

He's a 32-year-old center back/left back who covered for injuries in Columbus.

I think he returns to RSL on a one-year deal. I don't see any other teams making a play for him.

I've always been a fan.

Wynne is a guy who will always give you upwards of 2,500 minutes a year. He's still incredibly fast, a solid lock-down fullback who can also play a bit in the center.

He'll go somewhere else if he doesn't agree to a new deal with San Jose.