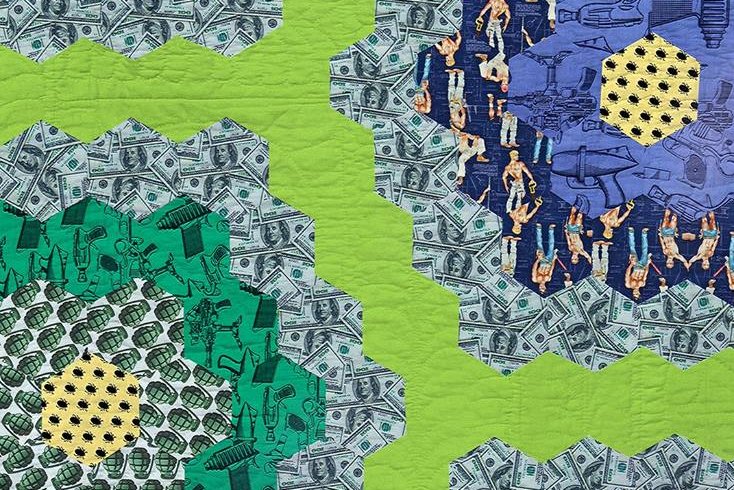 Approaching its 40th year, the Wind Challenge Exhibition Series showcases the works of Philly artists in three exhibitions annually, September through May; each exhibition features three artists. This month kicks off the second juried Challenge competition of this year, featuring the works of Debbie Lerman, Amy Ritter, and Emily White. The works are captivating: White creates large three-dimensional wooden animals (bears, bison, camels), as well as paintings of animals rendered in vibrant, painstaking detail, and has contributed to many murals around Philly. Ritter’s work includes large installations of cut-out figures -- Xeroxed photographs of her own figure and face. Lerman, on her website, describes the process of making her striking images of “quilted” patterns.

“I photographed fabric samples depicting strangely inappropriate subjects like strippers, dollar bills, and guns downloaded from the internet, then used Photoshop to cut and paste them into traditional patterns like “Grandmother’s Flower Garden” and “Double Wedding Rings.”’ 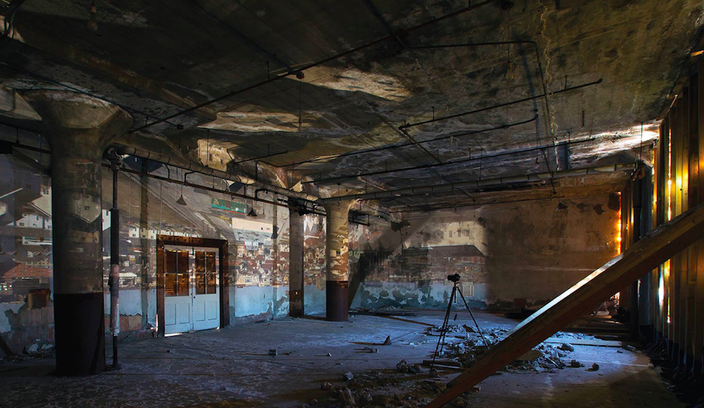 “A camera obscura,” his statement goes on to explain, “is a simple optical device that requires only a dark chamber—in Peters’ case, an entire room—and a small hole in one side of the chamber. Because light travels in straight lines, an inverted image of whatever is outside the dark chamber will be projected onto the wall opposite the hole. The size and placement of this hole determines the quality and appearance of the picture; a smaller hole produces a sharp but dim image, while a larger opening yields a bright picture that is less focused.”

Peters, whose interest in abandoned spaces kicked off when he was a graffiti writer about town, seeks to explore with this exhibition how “public and private—accessible and inaccessible—spaces transect and affect one another.”

You’re cordially invited to snoop through the details of four couples’ relationships in this show -- each couple shares the fact that one partner is a poet and one is a painter. The pairs will be displaying art they’ve made from their respective points of view, together. One couple, Rachel Ehrgood and Jared Wood, say of their work:

“It’s a daily ritual to ask our friends, family and colleagues; how was your day? Our answers are often benign and brief. Whether listening or speaking a whole universe of information, experience, and impression falls between the cracks as we rush to our next obligation. Using paint, text, collage Rachel and Jared will recover our lost answers, whether they deal with the personal, the familial, the communal or the world at large.” 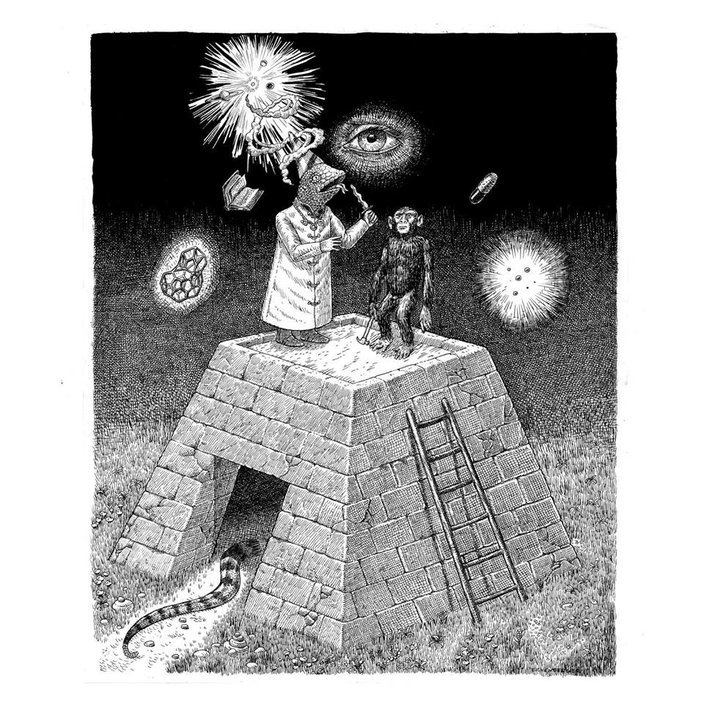 Here’s a seafaring fact you might not know: C.B.D.R. stands for “constant bearing, decreasing range.” That means two ships “are slowly getting closer, but maintaining the same relative bearing. If this continues, the two ships will collide.” It’s almost as if the theme of “things will end poorly if we continue on this way” has something to do with the world in a broader sense, right? Right! Artist David Eichenberger, in this exhibition of pen and ink drawings of animal allegories, will speak “about the current climate of the world, whether it be political or environmental.”

The Raleigh artist says he considers himself more an illustrator than anything else “because of his love of storytelling and his inability to write himself out of a paper bag.” Hey, sometimes an illustrated animal allegory does the trick better than written words ever could.