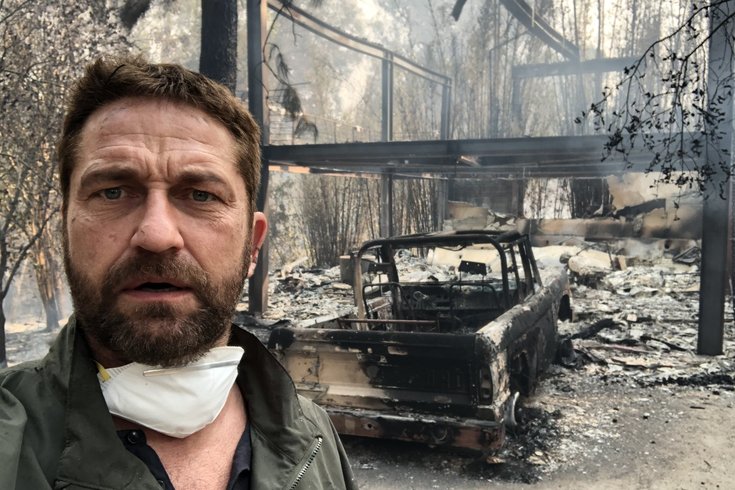 Gerard Butler takes a selfie outside of his nearly destroyed home in Point Dume in Southern California.

Gerard Butler refers to his neighborhood as a “war zone” in a new video he posted to Twitter Monday afternoon.  The "300" actor walks through his Malibu neighborhood, Point Dume, and films the destruction brought on by the Woosley Fire.

"It's heartbreaking. Every house after a certain point is gone," he says in the video. He notes that a friend’s house was reduced to ashes as he walks through the street filled with empty and destroyed lots.

The video shows white smoke still folding through the desolate area. As the video comes to an end he speaks solemnly, “Well there you go. What a difference a day can make to a community.”

He tweeted the video with the caption, “Driving around Point Dume on Saturday. My heart aches for all those who lost their homes and their lives in California. I was one of the lucky ones, my home was only partially destroyed. A lot of people lost everything and will have to rebuild from scratch.”

2/2 I am ok and so grateful for all of the well wishes. Please turn your support to those who need it most here, and throughout California. There's a Go Fund Me to help people across the state affected by the fires. Please join me if you can. https://t.co/ghkHkoZqUw

Butler posted a picture of his nearly destroyed home on Sunday.

Returned to my house in Malibu after evacuating. Heartbreaking time across California. Inspired as ever by the courage, spirit and sacrifice of firefighters. Thank you @LAFD. If you can, support these brave men and women at https://t.co/ei7c7F7cZx. pic.twitter.com/AcBcLtKmDU

Hundreds of people have lost their homes to the fire which began around 2:30 p.m. on Thursday. Miley Cyrus, Scott Derrickson, Robin Thicke and Neil Young were all among those whose houses were destroyed by the fast moving blaze which burned over 91.572 acres. Mandatory evacuations orders are still in effects for Malibu, Calabasas, and Hidden Hills.

Completely devestated by the fires affecting my community. I am one of the lucky ones. My animals and LOVE OF MY LIFE made it out safely & that’s all that matters right now. My house no longer stands but the memories shared with family & friends stand strong. I am grateful for