Here's everything you may have missed

The People’s Choice Awards were presented on Sunday night, airing for the first time on the E! channel. From emotional speeches to bitter fandoms, here's a recap of last night's highlights.

"Avengers: Infinity War" took home the award for "Movie of 2018" while Freeform’s “Shadowhunters: The Mortal Instruments” earned the most awards for any show, film, or person.

The "Shadowhunters" win was bittersweet for fans of the show. Freeform canceled the show back in June, much to the dismay of the show's rather large fanbase. The show was will supposedly get a two-hour film to wrap up the series, but there hasn't been any news on that since the cancellation announcement. The show won four awards, including “Show of 2018.”

And . . . the award for stupidest television network goes to . . .@FreeformTV!

Falling on Veterans Day this year, the show featured Blake Shelton, Scarlett Johansson and Bryan Stevenson giving thanks to service members, and Mila Kunis expressing her gratitude to firefighters battling the wild fire in Malibu. The out-of-control fire in the suburbs of Los Angeles, one of two huge wildfires in the state, was also an emotional topic for Kim Kardashian West as the E! star and her family received the award for "Reality Show of 2018." 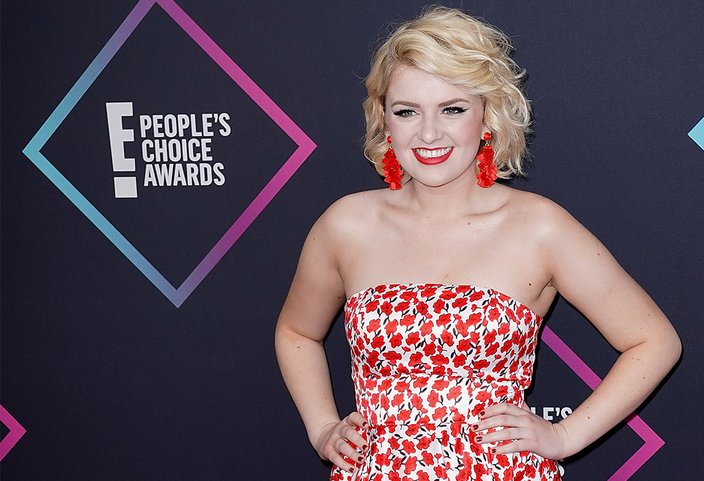 Maddie Poppe, who competed on “American Idol,” attends the People's Choice Awards 2018 at Barker Hangar on Sunday in Santa Monica, California. She won the award for “Competition Contestant of 2018.”

"Our hearts are broken from the horrific shootings and those who have lost their lives and homes, as well as the hundreds of thousands of us that have been evacuated from the devastating fires that are currently burning,” she said.

“Action is necessary," she added. "So anything we can do to help — as simple as donating to the many organizations that are collecting supplies; no form of help is too small."

Melissa McCarthy received the inaugural "People’s Icon Award," Bryan Stevenson, founder of Equal Justice Initiative, was named "People’s Champion of 2018," and Victoria Beckham received the "Fashion Icon Award." During her acceptance speech, Beckham referenced The Spice Girls, who recently announced they would tour again without her, and even spit out a little bit of "Wannabe."

"So many years ago, I started with girl power, and now that message is still as strong as ever."

One of the cheekier highlights of the evening had to be Nicki Minaj publicly hitting on Michael B. Jordan while accepting the award for "Female Artist of 2018."

"Shoutout to Donatella Versace for custom-making this outfit for me,” she mentions nonchalantly, blending into her flirtatious banter. “And shoutout to Michael B. Jordan, because he's gonna be taking it off for me tonight.”

Nicki Minaj won Album of the Year at the #PCAs and her acceptance speech included the summoning Michael B Jordan 🥰 pic.twitter.com/twXtHP8w3G

“Shoutout to Versace for specially making me this dress and shoutout to Michael B Jordan cause he's gonna be taking it off me tonight.”

Here is a list of winners from the People’s Choice Awards 2018:

"The Spy Who Dumped Me"

Melissa McCarthy, "Life of the Party"

"Orange is the New Black"

"Keeping Up with the Kardashians"

The Most Hype-Worthy Canadians of 2018