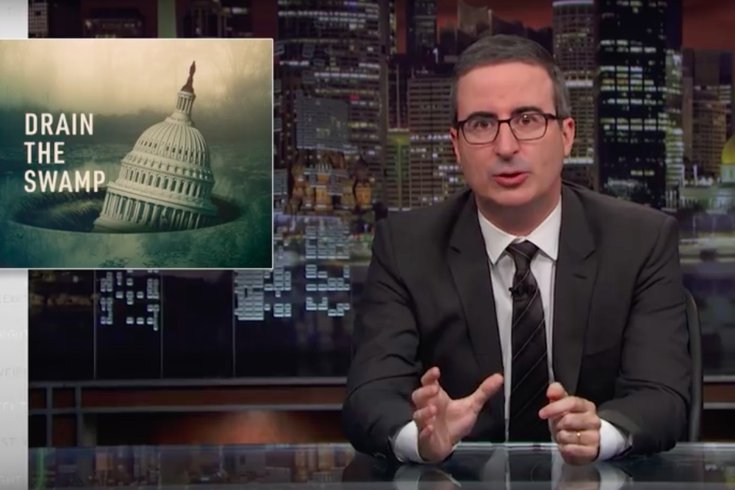 Despite blatant disagreements with much of President Donald Trump's campaign platform, "Last Week Tonight" host John Oliver admitted that, if you shout out enough campaign slogans, one of them eventually will be at least decent.

For example? Drain the swamp.

"Limiting the power of industry lobbyists and special interests is a genuinely good idea, and one I would love to give him credit." Oliver said on Sunday's episode.

"The odds are, if your whole political platform is just screaming random three-word phrases, one of them is bound to end up being good. 'Lock her up'? No. 'Build the wall'? No."

Only, as Oliver illustrated, Trump has given jobs in Washington to high-power millionaires and/or lobbyists with very particular interests and, on a literal level, has not drained the swamp when it comes to environmental safety.

Oliver reminds us of 2010's massive BP oil spill in the Gulf of Mexico, which is still causing damage to the water's sea creatures ("somehow making shrimp more disgusting," he said). The Bureau of Safety and Environmental Enforcement was created after the oil spill and agency's first two leaders have been two coast guard officers with specialties in marine safety.

Now under Trump, outspoken drilling advocate Scott Angelle, Louisiana's former lieutenant governor, is in charge of the department. Angelle currently is pushing a proposal to overhaul offshore rules, which would save oil companies nearly $1 billion in the next 10 years.

"It's pretty clear that Trump has in no way drained the swamp. What he has done is drain the phrase of its original meaning. In fairness to him, he was pretty transparent, from the beginning, about how little he meant it."

Check out the full clip below – including a look at Trump's Razzie-winning performance in "Ghosts Can't Do It."