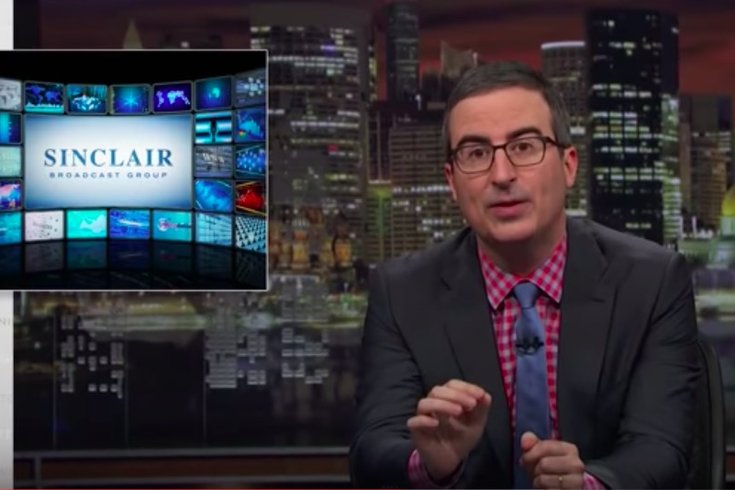 In case you missed it, Sinclair owns about 200 news stations across the country, including four in Pennsylvania – WOLF (FOX56) in Wilkes-Barre; WHP (CBS21) in Harrisburg; and WJAC (NBC6) in Johnstown. Lately, the owners of the conservative-leaning broadcast media group has been forcing all of its newsrooms to read the same script on air, chiding other media for perpetuating fake news.

“But recently, Sinclair took their game to a new level,” Oliver said. “A few weeks back, a script leaked with a statement they wanted local anchors to deliver, warning that national media outlets were publishing fake stories, which was echoing one of Trump’s favorite talking points – or more commonly, screaming points.”

He goes on to introduce a medley of anchors reading the promo, saying, “That statement is creepy enough, but when you see how many local stations were forced to read it, and you see it together … you begin to realize the true effect of Sinclair’s reach and power.”

This is not Oliver’s first time calling out the telecommunications giant. Last year, Oliver dedicated nearly 20 minutes to Sinclair and its political infiltration in what’s meant to be unbiased, unpartisan local news.

Sinclair is currently seeking to acquire Tribune Media in a reported $4 billion deal. If successful, that means 42 additional stations will be housed under the Sinclair conglomerate, which will comprise about 72 percent of local news networks, including PHL17.