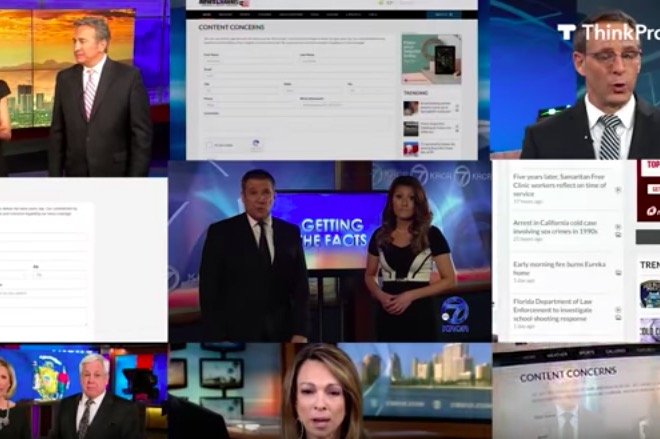 Numerous reports are detailing the promo script obligated of news anchors of stations owned by Sinclair Broadcast Group, the likes of which echoes President Donald Trump’s “fake news” rhetoric that he often applies to his own negative press.

Earlier this month CNN reported that news anchors across the country were infuriated with the mandatory script that many felt was a thinly veiled piece of pro-Trump propaganda.

If you’re unfamiliar with Sinclair Broadcast Group, it is one of the largest owners of local news TV stations across the country. Last year John Oliver gave a scathing overview of the politically-charged corporation meant to present unbiased news. Today it owns almost 200 U.S. television stations, affiliates of major networks such as ABC, CBS, NBC, Fox, and others.

Now, promos at those stations are rolling out, warning of the “biased and false news” plaguing America. According to CNN, the 60- to 75-second promos are meant to run often to maximize “reach and frequency.”

The promos are just the latest of conservative-leaning changes Sinclair has forced on local news networks. Other notable additions have been the mandated “Terrorism Alert Desk” about international security threats that may not always be suitable for a local news outlet.

ThinkProgress transcribed the script from one of these promos.

“Unfortunately, some members of the media use their platforms to push their own personal bias and agenda to control ‘exactly what people think’ … This is extremely dangerous to a democracy.”

Though there are no local Philadelphia news broadcasts functioning under Sinclair, there are a number of Pennsylvania-based stations where you might be hearing this promo soon -- or already have. The four PA stations are as follows:

Wikipedia has a list of all Sinclair's other stations. For the full effect, check out this video montage ThinkProgress pulled together of different broadcasts’ iteration of the mandated announcement.