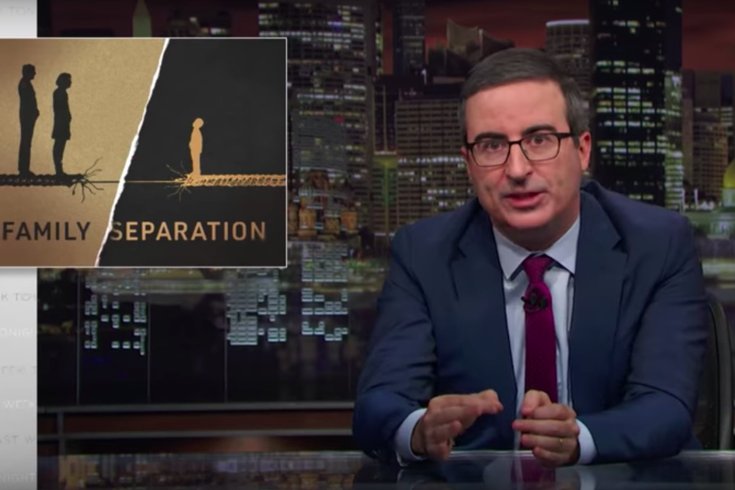 The week's news of a migrant caravan moving through Mexico toward the United States resulted in a renewed spotlight on President Donald Trump's immigration policies on Sunday's episode of "Last Week Tonight."

Host John Oliver, rather than muse on Trump's hypothetical threats to birthright citizenship, instead took a look back at the family separation policy implemented by the White House at the U.S.-Mexico border, which dominated the news in June and has since faded from headlines. Oliver broke down how and why the approximately 2,600 children were separated from their parents, including how the data systems keeping track of family members were inconsistent and vulnerable to human error.

RELATED: John Oliver ends 'Last Week Tonight' early so you have time to research for the midterm elections

"To put it mildly, when it comes to, 'How did we do this?' the answer seems to be a combination of incompetently and cruelly," Oliver said.

Then he asked: Why did this happen? "Last Week Tonight" fact checked Trump's statements on undocumented immigration, noting that many people crossing the border are seeking asylum, which is legal, and at official ports of entry, they faced ongoing delays for days or even weeks.

"You can't just deny people that long," Oliver said. "They're asylum seekers looking for safety, not AT&T customers trying to speak to a representative."

For migrants who enter the country not through a port of entry, Oliver pointed out, the crime is actually just a misdemeanor on the first offense, and most people are usually sentenced to time served. According to Oliver, 96 percent of people showed up to court after being assigned detention, and 99.3 percent attended their immigration proceedings. These statistics conflict with some of Trump's statements about most undocumented immigrants not appearing in court.

Which brings Oliver to the question: "Why the everlasting f**k did we really do this?"

"Well, I would argue that this is the logical result of a general hard-right turn toward demonizing immigrants for political advantage in a way that some might call racist and others ... would be wrong about."

Oliver ends the segment with a heartbreaking look at a young boy who was reunited with his mother after a month apart. In the clip, he's seen crying and saying, "I want to go to the jail" and, "You're not my mom anymore."

Check out the full "Last Week Tonight" segment below.