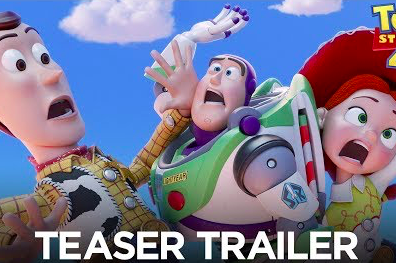 Next year is shaping up to be a huge revival for a pair of Disney's most successful films from the mid-90s.

We already knew about the widely hyped live-action version of "Aladdin" coming out next May, with Will Smith reprising Robin Williams' classic role as Genie.

We now also have confirmation that Disney-Pixar is going to make a fourth installment of the landmark 1996 film "Toy Story."

The company released the first teaser trailer for the summer 2019 film on Monday, a surprise to most who thought the franchise ended when Andy went off to college.

The last movie, released in 2010, grossed $1.067 billion at the box office and went on to win Oscars for Best Animated Feature and Best Original song. The idea that Disney-Pixar would leave such popular demand and critical acclaim on the table was always unlikely, despite the neat passing of the torch at the end of "Toy Story 3."

“Like most people, I assumed that Toy Story 3 was the end of the story,” director Josh Cooley said in a statement. “And it was the end of Woody’s story with Andy. But just like in life, every ending is a new beginning. Woody now being in a new room, with new toys, and a new kid, was something we have never seen before. The questions of what that would be like became the beginning of an entertaining story worth exploring.”

The trailer doesn't give a clear look at the narrative behind the new movie, but seems pretty apparent that one of the characters is having an existential crisis.

“The world of Toy Story is built upon the idea that everything in the world has a purpose,” Cooley said. “A toy’s purpose is to be there for its child. But what about toys that are made out of other objects? Forky is a toy that Bonnie made out of a disposable spork, so he’s facing a crisis. He wants to fulfill his purpose as a spork, but now has a new toy purpose thrust upon him.”

Here's the synopsis we get from Disney-Pixar:

Woody has always been confident about his place in the world and that his priority is taking care of his kid, whether that’s Andy or Bonnie. But when Bonnie adds a reluctant new toy called “Forky” to her room, a road trip adventure alongside old and new friends will show Woody how big the world can be for a toy.