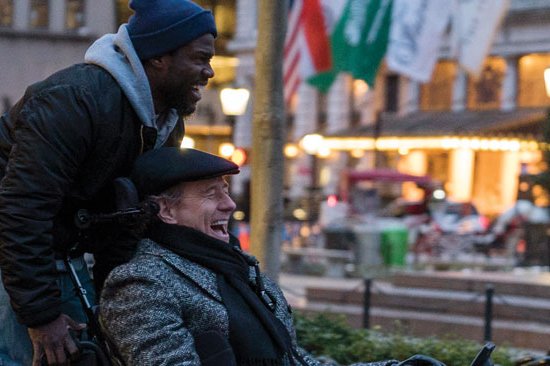 The Philadelphia Film Festival kicked off Monday with a full schedule of entries that included the premiere of Kevin Hart's latest movie.

The hometown favorite's drama, "The Upside," is among the more than 100 films screening through October 28 at the Philadelphia Film Center in Center City. It's a gripping true story about the unlikely friendship and moving bond between a paraplegic man (Bryan Cranston) and his newest assistant (Hart), who is an ex-con.

RELATED: Philadelphia Film Festival opens Thursday with addiction centerpiece 'Ben is Back' | These are the Philly filmmakers showing at this year's film festival

The film is more sentimental than Hart's typical roles, although he does add some of his signature lightness and punchlines to the character. And the dynamic between the two actors is charming. Nicole Kidman, an expert by now in dramatic roles, also adds some more depth in her part as Cranston's assistant.

"The Upside" began filming in Philadelphia in 2016 but was left in limbo for more than a year following the sexual assault allegations against disgraced movie mogul Harvey Weinstein and the subsequent bankruptcy of The Weinstein Company, which produced the movie.

But now, "The Upside" will make its national debut in January.

The film, which previously was titled both "The Untouchables" and "Untouchable," first premiered in fall 2017 at the Toronto Film Festival to mixed reviews. It currently has a 55 percent rotten rating on Rotten Tomatoes based on 11 reviews. But to be fair, the movie hasn't had much visibility. The film's Toronto premiere was the last time anyone saw it before Monday night's Philadelphia screening.

"The Upside" is an adaptation of the 2011 French film "The Intouchables." That version was Oscar-nominated and won a handful of international awards, too. The two are very similar (almost too similar) but the French version, admittedly, is a bit more moving and emotional than Hart's.

Here's the trailer for the French "The Intouchables."

Want more content about this year's 27th annual Philadelphia Film Festival? Here's all of our coverage of the festival. You can buy tickets to upcoming films here.

If you want to view the entire festival's schedule, click here.

Some highlights for Tuesday include a couple of free American Independent and Documentary films during the day, as well as a couple of celebrity appearances later tonight during centerpiece films "The Front Runner" and "Wildlife."