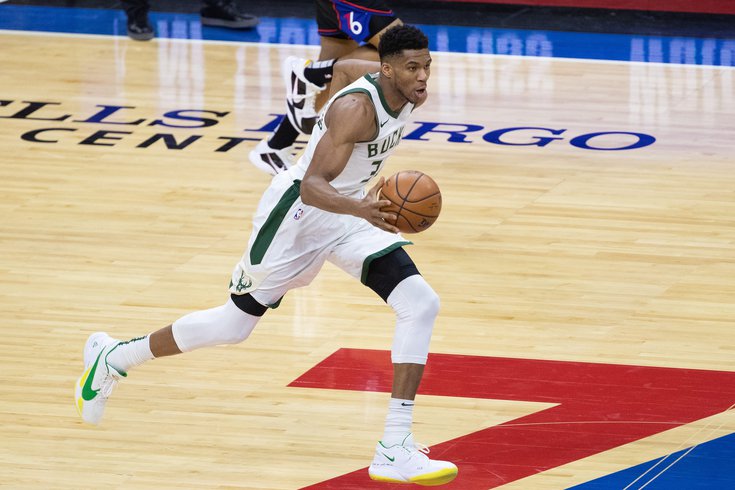 Giannis Antetokounmpo rewarded himself with a Philly cheesesteak after a 32-point, 15-rebound performance against the Sixers Wednesday night.

Wednesday night was not a pleasant one for the Philadelphia 76ers, as the team's six-game winning streak was snapped by Giannis Antetokounmpo and the Milwaukee Bucks in a 109-105 overtime loss at home.

After rallying from a 19-point second half deficit to defeat the Sixers, Milwaukee's All-Star forward and two-time MVP celebrated by getting himself a cheesesteak. But he also got a lesson in the lingo to use to properly order one ... sort of.

The 26-year-old Antetokounmpo was asked by a reporter during a postgame Zoom interview why he wasn't eating a cheesesteak. Upon hearing the mention of cheesesteaks, Antetokounmpo's focus immediately turns to eating and securing one for himself.

"Can somebody grab me one please?" Antetokounmpo says. "Hey, give me the steak one with the mushrooms and cheese, American cheese please."

"In Philly, they call that a whiz wit," the reporter says.

Giannis got himself a cheesesteak after the Bucks win in Philly 🤣

The phrase made no sense, whatsoever, to Antetokounmpo. Admittedly, the phrase "whiz wit" is a mess grammatically. We're with the NBA star who's a native of Greece there, but it's just the way it is.

The bigger issue here is that Antetokounmpo is getting bad information about how to order a cheesesteak on two fronts.

Which, leads to second problem: Antetokounmpo wanted a cheesesteak with American cheese, not Cheez Whiz.

The media member who gave him the bad lesson is Stephen Watson, a reporter and anchor with WISN12, an ABC affiliate in Wisconsin who says he was Philly raised in his Twitter bio. Watson corrected his misinformation in a tweet, shortly after posting video of the Antetokounmpo cheeseteak conversation.

I have to admit, I was laughing so hard when he called for the cheesesteak that I missed him saying mushrooms with American (which is a delicious combo, btw). Giannis should know "whiz wit" is cheese whiz with onions. As a Philly native, I must take these things seriously.

It's unknown which steakshop made Antetokounmpo's sandwich. It does not appear to be Pat's or Geno's, based on the wrapper, but the logo is not clear in the video. Tony Luke's would be a fair guess, given there is one in the Wells Fargo and the original location is not far away on Oregon Avenue in South Philly.

It was a well-earned cheesesteak Wednesday night for the man many call the "Greek Freak." Antetokounmpo led all scorers with 32 points, 28 of which came in the second half and overtime, and pulled down 15 rebounds in the win.

Antetokounmpo is a foodie at heart. He told reporters Monday that he was looking forward most to having a smoothie, pepperoni pizza and chicken wings on his day off Tuesday before matching up against the Sixers.

"I’m looking forward to taking my day off tomorrow, enjoying my pepperoni pizza, my smoothie, my chicken wings.”

We've all been Giannis 😂

NOTE: Corrections were made to this article and headline after it was published.