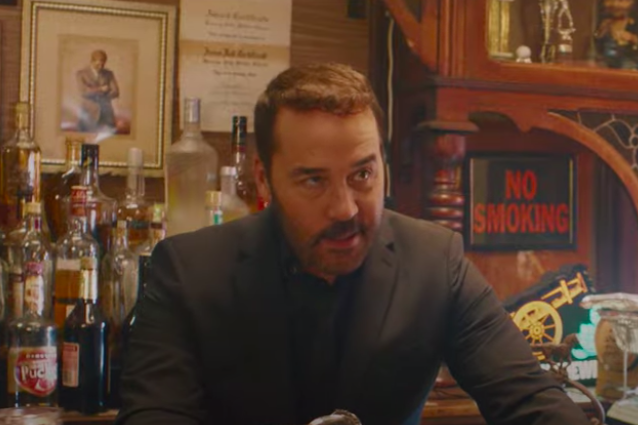 The Delco-based movie, "Last Call," starring Jeremy Piven, tells the story of a real estate developer who considers building a casino in his hometown despite the objections of childhood friends.

A newly released clip of the Delaware County-inspired movie "Last Call" features actor Bruce Dern wearing an Erin Express T-shirt and boxer shorts while lecturing co-star Jeremy Piven on the importance of remembering where he came from.

The movie, which hits select theaters Friday, is partly based on the life experiences of executive producer Greg Lingo, a 1990 Upper Darby High School graduate and a longtime real estate developer.

The main character, Mick, is a successful real estate developer who returns to his blue-collar hometown and is finds an opportunity to build a new casino. The local watering hole in the fictional town, Darby Heights, is named Callahan's Tavern, a nod to the Callahan's Tavern on West Chester Pike in Upper Darby.

"It's definitely Delco based," Lingo told FOX29. "The town in the movie is called Darby Heights, which is somewhat related to Upper Darby."

The cast was inspired by Lingo's childhood friends. It includes comedian Jamie Kennedy and "Saturday Night Live!" alum Cheri Oteri, who were both born in Upper Darby, as well as some lesser-known actors from the Philadelphia suburbs.

Though some shots were filmed in Upper Darby, most of the movie was filmed in Bayonne, New Jersey, where filming was more cost effective for the low-budget film.

The movie was directed by Paolo Pilladi and stars Dern, Taryn Manning, Zack McGowan and Cathay Moriarty. It will debut in Philadelphia at the Ritz 5 and Navy Yard Drive In. It also will be available for rental via Amazon Movies, AppleTV, GooglePlay, YouTube and PayPerView, among other platforms.

In the film's trailer, Mick grapples with bringing his family's bar back to life or committing to the casino development. His friends and family push back against the new development, and try to remind him of his childhood. He finds himself getting closer to the people he grew up with and reconnecting with old friends.

"Last Call" isn't the only Delco-inspired story getting airtime. The TV-series "Mare of Easttown" featuring Kate Winslet with a Delco accent, will premiere on HBO in April.