Gilbert Gottfried explains his tightrope of a career

A first-ever documentary, a podcast and a Philly-area gig on New Year’s Eve wrap up 2017 for the crass comedian 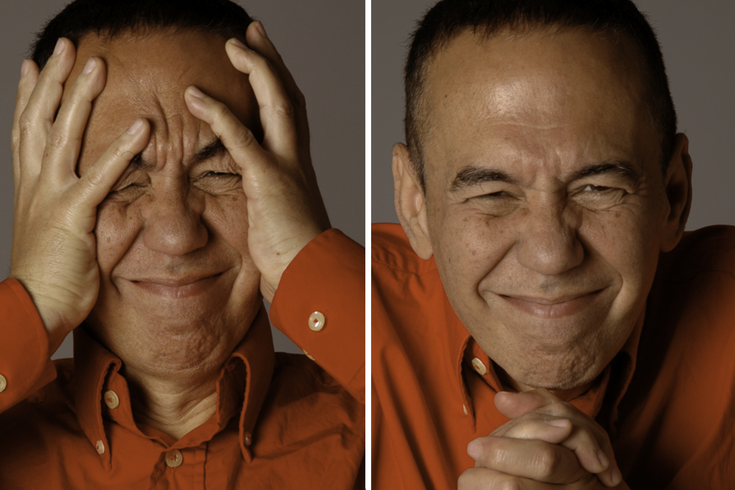 Maybe Comedian Gilbert Gottfried has been part of your life for so long, you’re probably not sure when you first embraced him.

Did you catch his blue and black humored stand-up routine on stage? Or was it during his brief tenure on “Saturday Night Live,” or his many Friars Club roasts on Comedy Central? Did his shrill voice come to you as an adult selling insurance (“Aflac”), or as a kid watching Gottfried as Iago the parrot in Disney's “Aladdin” or as Kraang Subprime in “Teenage Mutant Ninja Turtles?”

None of these roles or voices prepare you for the quietly tender-hearted husband and father that fills the screen in the brand new documentary, “Gilbert,” which debuts on Hulu tomorrow. You might not recognize the usually grating comic from the smartly sentimental showbiz enthusiast/host of “Gilbert Gottfried’s Amazing Colossal Podcast,” now celebrating its third anniversary. If you want Gottfried’s old-fashioned, dark, crude, stand-up laughs, he’s doing a special New Year’s Eve event just outside the Philly city limits at Mount Airy Casino Resort in the Poconos.

Q: It’s not like you were never interviewed before the acclaim of the podcast or the documentary, but this focus – on you, not your persona – has got to be daunting in its difference, no?

A: Oh yeah, it’s definitely different. Doing the film was more uncomfortable to watch than do. It was like the first time you hear your voice on a tape recorder or see yourself in a home movie.

Q: How many times have you watched the documentary and are there moments in your existence you would have liked to have pulled out or included in the film?

A: It’s strange. There is stuff you think of that would’ve been good to include, but it’s as if you’ve had a fight with someone where it’s only afterwards you think of the cutting things you should have said. Same thing with leaving things out. But I never told Neil [Berkeley, the director], ether way.

Q: You’ve done the podcast since 2014, and it took several years to ferment and film the doc, so you had to be in your late 50s when these things started. Did that time – that age – seem ripe for recollection?

A: The funny thing about the film is that I never really went for it. The filmmaker came to me and said he always dreamed of doing a Gilbert Gottfried documentary. I told him perhaps he should set his dreams a lot higher. Then he just started following me with a camera, and me being a wimp, let him.

Q: Did you have the podcast mapped out that it would feed your fandom of lost Hollywood? Along with guys like Carl Reiner and Adam West, you’ve had a handful of your 70s comedy contemporaries who you don’t always hear about now.

A: It was my wife who said, maybe I should think about doing a podcast. She knew I was interested in old Hollywood – so I’d concentrate on that. You’d see “The Love Boat” or “Fantasy Island” filled with stars you thought might be dead, but there they were alive, as good as they always were. That was my model.

Q. And how are you managing Twitter these days?

A. I don't know what I'm doing, but I'll put jokes on there, often the dopiest puns, and I also have to do an apology tweet ready after each joke. I feel like the public is going to demand the apology eventually, so I might as well just give it to them with the joke.

Q: Is today’s an apologist culture when it comes to certain types of comedy, yours in particular? Do we live in a prurient time and are audiences overly cynical?

A: It’s very strange the times we live in with the internet. It used to be – we had critics, columnists and commentators who were experts. We could read or listen to them and depend on them for expertise. Now, everybody is an expert, and now everybody’s opinion is worth something, whether they know what they’re saying or not. With the internet, you could just type, “Have a nice day,” and people will respond with hatred. The internet makes me sentimental for lynch mobs – at least they had to go out and get their hands dirty. Now, you just sit in your underwear and create lynch mobs on your couch.

Q: There is a portion of the documentary where someone speaks to your son, Max, about him liking your comedy and you seem kid-like in your response. Between that and the “Life, Animated” documentary, where an autistic child communicates with the world through your Iago character in “Aladdin,” there’s something about you that touches the heart of children. Is that weird for you since so much of your work can be considered not kid friendly?