A Q&A with stoner comics Kenny and Keith Lucas 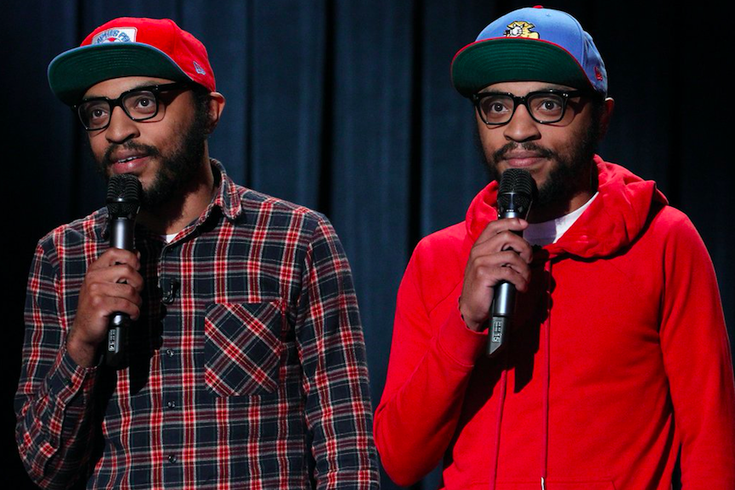 The Lucas Brothers appear Friday and Saturday, Dec. 1 and 2, at Helium Comedy Club.

Kenny and Keith Lucas – comedy’s cherished Lucas Brothers twins – look and sound so much alike, you have to squint hard and tight to distinguish one from the other.

Yet, when it comes to their craft (their smartly absurdist brand of stoner humor, their magnetic animated series “Lucas Bros. Moving Co.”), they are as unique as fingerprints from every other comedian working today. Plus, there is an edgy, psychological/philosophical vibe to everything the brothers do. Their live showcase at Helium Comedy Club this weekend should prove to be a heady potion.

Q: You’re Jersey raised gentlemen – nearly neighbors of Philly: how is that upbringing reflected in every – or – any comic move you make?

Keith: Our Jersey upbringing reflects heavily in every move we make. In essence, we carry it with us. From our manner of speech to our perspectives on such things as driving and fast food, we like to believe we represent our Jersey heritage authentically.

Q: Kenny, you are older than Keith by several minutes. What do you see as the advantage and disadvantage of age and sage wisdom?

Kenny: I like to take risks, which is not to say Keith doesn’t. That might be related to my few minutes older difference, or my being a bit more insane. I haven’t quite figured it out.

Q: What is the most radical difference of opinion that one of you has from the other?

Kenny: From my perspective, Keith tends to be a bit more circumspect in his approach to establishing new relationships and in exploring creative enterprises. He has an uncanny ability to detach himself emotionally, viewing things objectively. At times, I tend to be a bit more emotive, for better or for worse.

Q: Creating the “Lucas Bros. Moving Co.” cartoon: Other than money, what was the motivation to go animated?

Keith: We do nothing for money. We like to do things that appeal to our creative appetites in the moment. At the time, we were fascinated by animation. We thought it more substantively different from other forms; which, in our opinion, makes it more challenging.

Q: When it comes to improvisation, I understand that you guys are no fans of the form – why not?

Keith: We are fans. We just aren’t that good at it. We love the art. For those who are able to do it at its highest level, we commend them.

Q: I ask, because considering the riffing on your first televised comedy special, "On Drugs,” it seems very improvised, internalized, inherent, second-nature stuff. How do you guys prepare for your stand-up sets?

Kenny: We write, perform, record, and transcribe. We like to leave room for improvisation, but, everything is well thought out from the beginning, and precise. Our goal is to make it seem as conversational as possible.

Q: Why tackle the umbrella topic of drugs in the first place, though often you use the idea, metaphorically?

Keith: Drugs fascinate us. We’ve used drugs. We’ve studied the impact of drug laws. We’ve been impacted personally by drugs and the war on drugs. It’s a topic that impacts us multi-dimensionally.

Kenny: We’ve had some of our greatest and worst moments on drugs. In our attempt to be as authentic as possible, we believe it’s necessary to speak truthfully about our experience with addiction and the implications of the drug war on our lives.

Q: Do you two have any love for Cheech & Chong?

Kenny: We absolutely love Cheech & Chong. They are a huge influence. We respect their approach to the business. Moreover, we respect their style of comedy. It was naturalistic and relatable.

Q: How will you embrace your brand of stoner comedy for these Philly gigs?

Keith: We’re working on a movie, which more thoroughly explores our relationship with drugs, the prison system, and the entertainment industry. Our goal is to add a psycho-political element to traditional stoner tropes. More specifically, we’d like to examine why stoners become stoners, using our story as a microcosm.

Q: In the past you've throw shade at old political tropes like Nixon and Watergate. Does the currency of Trump mean anything to you as stand ups?

Kenny: We are in the midst of working on another special which examines another president who had the desire to make America great again. As we attempt to understand our past, we’ve found that many of our issues stem from policies created by former presidents, not Trump. Eventually, we’ll get to him. But as it stands, we have a ton to unpack from the past.

Q: So what do you two both want to be when you grow up?

Keith: Each day, we hope we grow a little wiser and better as people. We enjoy making people laugh.

Kenny: We derive pleasure from that. So long as we can do that at its highest level, we don’t think we need much more than that.