Getting paid to pick up litter in Philadelphia: There's an app for that

Created by Philly-based MilkCrate and 'Ya Fav Trashman,' Glitter will soon dispatch cleaners to blocks throughout the city 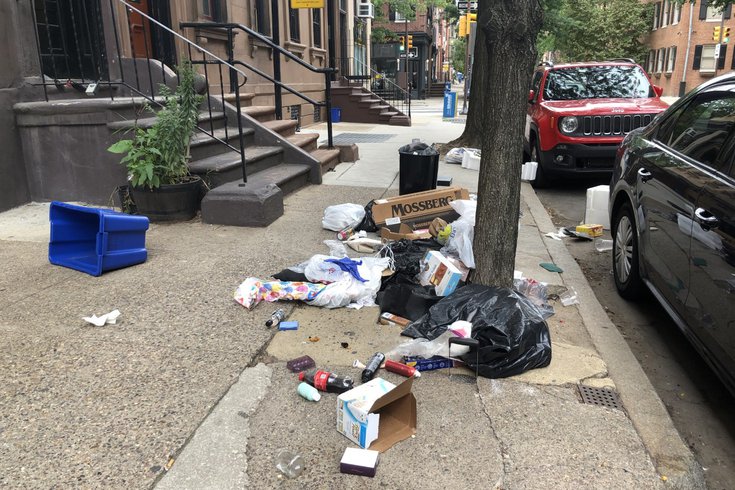 A new app called Glitter will pay people to clean up litter from Philadelphia's streets. The app is available for download on the Google Play Store, and its creators hope to have it fully operational by the end of August.

Morgan Berman has noticed trash piling up on Philadelphia's streets since she was a child staring through the windows of her mom's car during trips through the city. She recalls wondering, "Where is it coming from? And why is it still there?"

Those same questions ran through Berman's mind in 2018, when she tripped over litter sprawled across the sidewalk on her way to New Year's Day brunch with friends in Old City.

But having launched a tech company, MilkCrate, just four years earlier to provide nonprofits with tools to solve societal challenges, Berman said her next thought was: "Maybe I can find a way to do something about this."

As July 2021 came to a close, Berman picked up a bag of trash and left it on the steps of the Municipal Services Building. At her side: "Ya Fav Trashman" Terrill Haigler, who documented his life as a Philly sanitation worker and advocated for better treatment of crews on social media before ending his tenure as a city employee in February. Their message was simple: Philadelphia is in the middle of a trash "epidemic."

"We can do better," Berman told PhillyVoice on Wednesday, referring to the city's approach to cleaning up its streets. "You're just not trying hard enough; you're not being creative enough."

Not long after Berman said this, her eyes lit up. Someone had just paid to have their block cleaned on a weekly basis through Glitter, an app Berman and Haigler hope to have fully up and running by the end of August. Here's what you need to know.

How does Glitter work?

Let's say you live in West Philly and notice litter piling up on your block on a regular basis. Rather than relying on the Streets Department to take care of it, you and your neighbors and/or your neighborhood association could pool together $140 a month for a "Clean Block Subscription," and Glitter will dispatch one of its cleaners to your location on a weekly basis. The cleaners will have to show their work by submitting before and after photos of the streets.

Glitter is also actively looking for corporations to sponsor blocks, especially in neighborhoods where residents may not be able to crowd-source monthly payments, Berman said. Checks from corporations will pay the salaries of the cleaners assigned to the sponsored areas.

Local delivery service startup The Rounds is funding part of the app's pilot phase by sponsoring 16 blocks of Dickinson Narrows in South Philly. At least four other corporate deals are in the works, including one with supermarket chain ShopRite. The more money coming in from individuals, blocks, neighborhoods and/or corporations, the more widespread Glitter's operation can get.

"We're only capped by the resources we have," Berman said.

Eventually, Berman and Haigler hope Glitter will also allow residents to sign up for neighborhood cleanups and provide other helpful information such as instructions for registering to vote and enrolling children in schools.

"Wouldn't it be nice if we actually had a crowd-sourced community engagement and communication system that relies on mobile technology and people's local relationships?" Berman said. "It seems so simple and obvious that we should be doing that."

How do you become a Glitter cleaner?

Anyone ages 18 and older can fill out this application on Glitter's website. You'll have nine neighborhood options for cleaning, and the application allows you to select all of them. But Haigler said cleaners will likely be assigned to areas of the city that are close to where they live.

Those who have already applied to become cleaners — if approved — should receive emails with their neighborhood assignments in the coming weeks, Berman said. You'll then download a second app, on which you can access a map of your assigned areas and report your cleaning process. Payments will be made weekly through Cash App or Venmo.

How much money can Glitter cleaners expect to make?

It depends on how many blocks you clean — and how dirty those blocks are. Glitter's website says to expect between $100 and $200 per month per block. The number of blocks you're allowed to clean may be limited during the app's pilot phase.

Berman and Haigler told the Inquirer that their goal is to eventually provide cleaners with a living wage of $15 per hour.

Android users can download Glitter now on the Google Play Store, but as of Wednesday it was not available on Apple's App Store. Berman said cleaners will not be sent out on assignment until iOS users have access to the app.

What are Glitter's long-term goals?

To one day include the Streets Department as one of its customers — and for the city to not need the app for very long, according to Berman.

"My long, long-term hope is that we don't have to keep paying people to pick up litter because we will have things in place that prevent it from becoming an issue that we need to solve," she said.

During their protest outside the Municipal Services Building, she and Haigler outlined a list of demands, including the resignation of Streets Department Commissioner Carlton Williams. Glitter's earliest iteration, Berman said, was an app MilkCrate designed to be implemented by the department and was slated to receive funding in the city's budget, but Williams refused to support it. In a statement to Billy Penn, city spokesperson Joy Huertas said the department "informed MilkCrate that they could implement the application, however, they would need to acquire their own funding to start their business."

"Paying people to pick up litter appears to be a novel idea but frankly there are logistical concerns regarding the administration of the program," Huertas told Billy Penn. "There is insufficient data to illustrate the ability to reduce litter citywide."

In response, Berman pointed to the city's $62 million street-cleaning initiative, which begins Aug. 9 in four areas of Philly, with plans to expand to other neighborhoods over the next three months. Berman criticized the program for being "incredibly expensive " and "gas guzzling" for its scale.

"If we can prove that (Glitter) works, then they should be paying for it," she said. "Because they're already putting a lot more money into things that aren't producing the results."