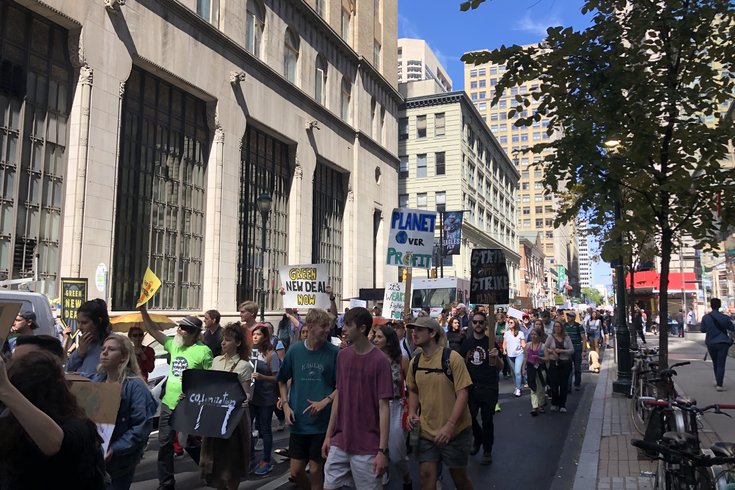 Thousands of demonstrators marched south on 15th Street in Center City, Philadelphia on Friday, Sept. 20, 2019, to raise awareness about, and call for action on, climate change.

Thousands of demonstrators took to the streets Friday afternoon in Center City as part of a global climate strike to raise awareness about the health of the planet and ongoing climate change.

The global strikes were organized, in part, by teen climate activist Greta Thunberg. According to CNN, more than 4,000 strikes were planned for Friday in 139 different countries. Locally, the Philadelphia march was organized by a number of groups, including the Sunrise Movement.

The School District of Philadelphia said earlier this week that students who skipped class to march Friday would be marked absent.

Here's more of the scene from Center City:

The march comes amidst ongoing global concern about climate change, and a rising sense of urgency among young voters to effect change before it's too late. The demonstrators in Philly were demanding commitment to the Green New Deal and a plan to phase out fossil fuel use, among other things.

According to the National Oceanic and Atmospheric Administration, this past July was the warmest July, globally, in the past 140 years. Nine of the 10 warmest Julys have occurred in the last 14 years.

Also on Friday, the Pennsylvania Department of Environmental Protection denounced President Donald Trump's decision to roll back California's ability to establish its own auto emissions standards.

“Climate change is one of the most pressing issues of our time, and we should be focused on increasing our efforts to combat it,” DEP Secretary Patrick McDonnell said in a release. “The Wolf administration has made it a priority to address climate change, and we will continue to push for solutions.”