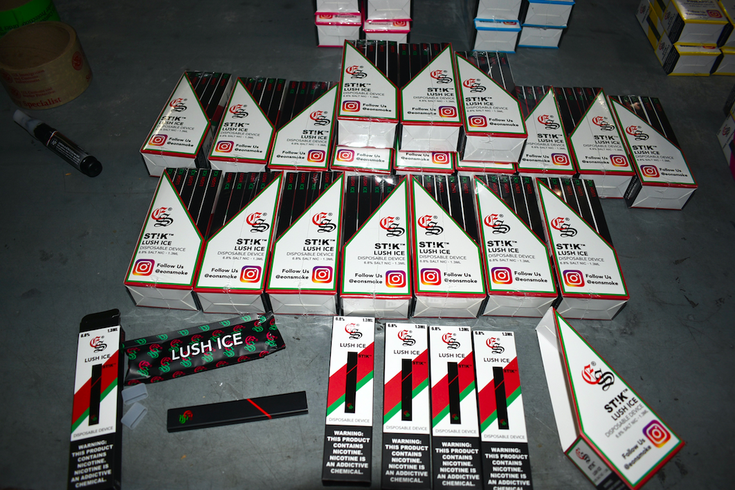 Counterfeit Eonsmoke brand vaping products were delivered to Warrington, Pennsylvania on Sept. 3 and later seized by Philadelphia Customs and Border Protection agents. Counterfeit pods are among the products health officials are examining in connection with hundreds of lung illnesses linked to vaping in the United States.

More than 500 counterfeit e-cigarette pods were seized in Philadelphia last Friday, marking the second time this year that illicit vaping products were intercepted by local Customs and Border Protection officials.

The announcement from CBP comes as the nation grapples with hundreds of cases of a mysterious lung illness linked to vaping. Seven people have died and medical experts are still working to identify which nicotine and cannabis vaping products may be responsible for the illnesses.

The seizure last Friday included 295 Eonsmoke brand and 300 VGOD brand e-cigarette pods of various flavors that were shipped from Hong Kong to an address in Warrington, Bucks County.

Trademark holders for the e-cigarette brands verified that the products were counterfeits. They were appraised at a value of $11,500.

“Counterfeit consumer goods, such as these electronic nicotine products, pose a great danger to consumers because there is no way to verify the authenticity or the safety of the product’s ingredients,” said Casey Durst, CBP director of field operations in Baltimore. “Customs and Border Protection will continue to work closely with our trade and consumer safety partners to intercept counterfeit consumer goods, especially products that can harm American consumers.”

In April, customs officials seized more 1,000 fake Juul pods at the Port of Philadelphia. The packages had been shipped from China and were bound for Newark, Delaware.

Many of the victims vaped marijuana products before falling ill, health officials have said. Others vaped nicotine or used both substances.

Two brothers in Wisconsin, where many of the initial illnesses first surfaced, were arrested last week in connection with the illegal production and sale of THC-infused vaping cartridges that may be linked to lung illnesses.

The surge of cases last week prompted the Trump administration to pursue a ban to remove flavored e-cigarettes, including mint and menthol products, from the marketplace.