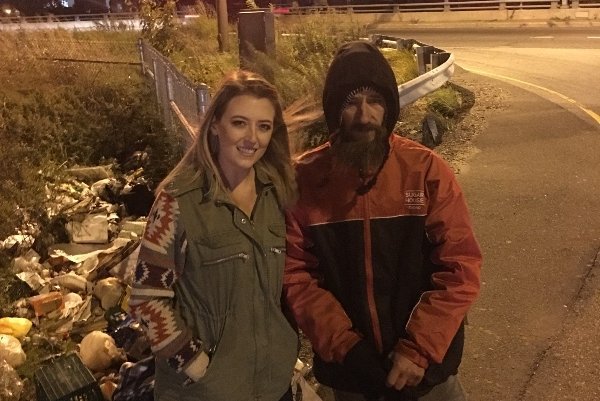 Kate McClure (left) and Johnny Bobbitt (right) are shown along I-95 in Philadelphia. The photograph accompanied a 2017 GoFundMe campaign that fraudulently raised more than $400,000 based on a lie concocted by Bobbitt, McClure and her ex-boyfriend, Mark D'Amico. Their story is featured in a new documentary, 'No Good Deed,' that will premiere on Hulu on Dec. 21.

In November 2017, three people in the Philadelphia area proved that the world's penchant for feel-good stories is unbelievably easy to manipulate.

The story of a homeless veteran who gave his last $20 to a woman stranded on the shoulder of I-95 was a tearjerker for the ages, especially during the holiday season when people are at their mushiest.

A powerful photo of Johnny Bobbitt, the homeless Good Samaritan, standing next to the gratefully indebted woman he bailed out, Kate McClure, was enough to inspire more than $400,000 in GoFundMe donations from around the world.

The only problem is that their story wasn't true. Bobbitt had met McClure and her ex-boyfriend, Mark D'Amico, at Philly's former SugarHouse Casino a month before McClure's car "ran out of gas" on the highway. The trio had come up with an ingenious plot to exploit the public's kindness by crowdfunding to uplift and repay Bobbitt for his good deed.

It was so brilliant that the tale caught the attention of breathless daytime TV hosts, who invited the trio on to talk about the spirit of giving.

But Bobbitt, D'Amico and McClure proved woefully ill-prepared to keep a lid on their lie as tension developed over the cash and the lavish, indiscreet lifestyle that began to give them away.

Four years after the biggest con in GoFundMe's history unraveled, Hulu will debut "No Good Deed," an hourlong documentary about the scam that was produced by 6ABC. The documentary will feature exclusive interviews with the perpetrators, their family members, GoFundMe staff and the investigative team who pieced together the story. You can watch the trailer below.

As evidence against the trio piled up, authorities determined that D'Amico had helped Bobbitt open up a bank account in December 2017 and deposited $25,000 to help get him on his feet after the GoFundMe campaign went viral. Bobbit also was given a camper in which he briefly lived on a property owned by McClure's family in Burlington County, but he spent some of the funds he received to feed a drug addiction, investigators said.

When Bobbitt became upset that D'Amico and McClure weren't giving him more money, he sued them. That's when prosecutors looked into the trail of money and discovered that the former couple had spent almost all of it on gambling, travel, luxury items and expensive cars in a matter of a few months.

6ABC investigative reporter Chad Pradelli and special projects producer Cheryl Mettendorf will reveal explosive new recordings and interview material that bring to light the downfall of Bobbitt, D'Amico and McClure. All three faced a slew of state and federal charges that are still winding their way through the court system. GoFundMe also had to issue refunds to more than 14,000 people who had donated to the trio's "Pay it Forward" campaign.

"Acts of kindness bring out the best in people but this is a story that brought out the worst," Pradelli said.

D'Amico, who was deemed the ringleader of the scam, pleaded guilty last month to a federal wire fraud charge and will be sentenced next March. He previously pleaded guilty to a state charge of misapplication of entrusted property.

McClure and Bobbitt both pleaded guilty to state and federal charges of theft and conspiracy in 2019. Bobbitt was sentenced to five years in state drug court. Bobbitt and McClure are both awaiting sentencing next year on the federal charges.

The release of the documentary on Hulu is part of an initiative by ABC Owned Television Stations to make more locally-produced true crime content available to a wider audience in partnership with Hulu, which will premiere "No Good Deed" on Tuesday, Dec. 21.

An interactive website at 6ABC also walks viewers through an immersive timeline of events in the case, including audio recordings, text messages, court documents and social media posts that help illustrate how the $400,000 scam was exposed.