As the Philadelphia staple celebrates 19 years, owners Dave Garry and Heather Gleason prepare to open in South Jersey this spring 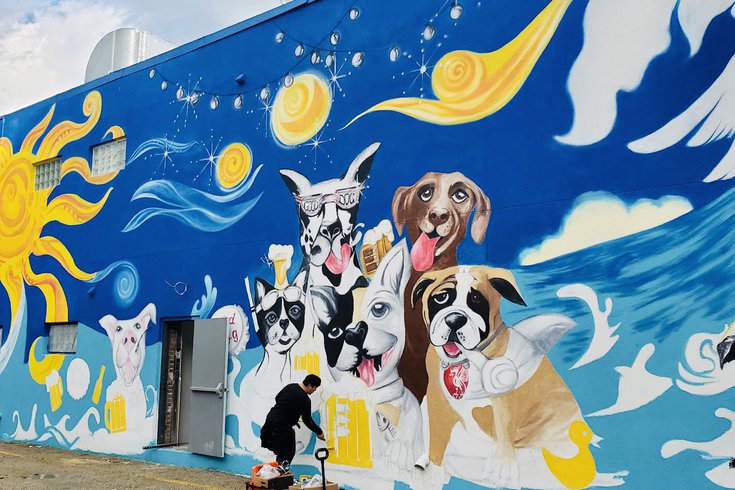 Good Dog Bar, which recently celebrated its 19th birthday in Philadelphia, is expanding to a second location in Atlantic City, where owners Dave Garry and Heather Gleason hope to welcome customers this March. Above, a mural depicting dogs on the beach is painted outside the new restaurant.

The Jersey Shore is going to the dogs, thanks to a popular Philly bar's upcoming second location.

Good Dog Bar, which recently celebrated its 19th birthday in Philadelphia, is expanding to Atlantic City, where owners Dave Garry and Heather Gleason hope to welcome customers this March.

The Good Dog Bar sequel will open at 3426 Atlantic Avenue, just steps from the well-known Knife & Fork restaurant as well as Stockton University's AC campus. The owners are working on revamping the building, which hasn't been in use since it was Role Play Lounge, one of three Atlantic City swingers' clubs that existed in the 2010s. 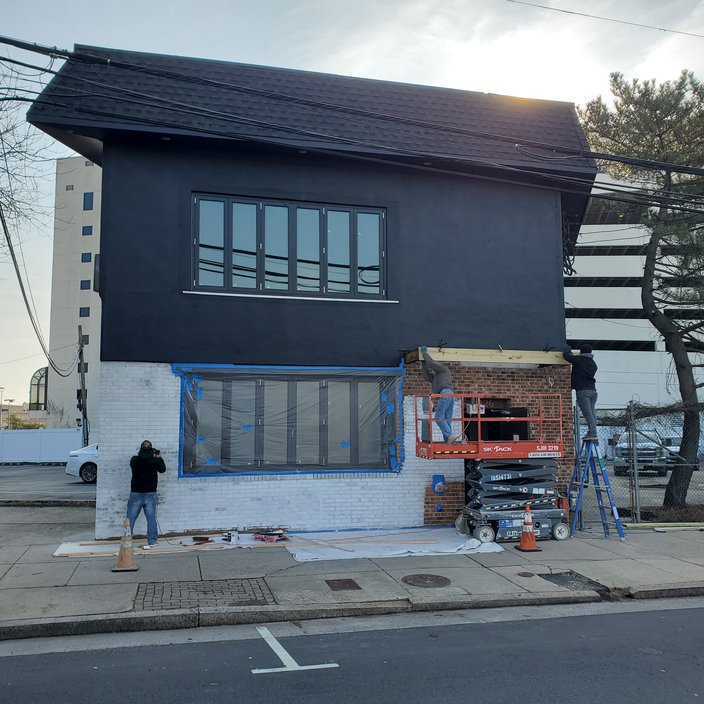 Whereas the Philadelphia location is three stories, narrow and dimly-lit, the two-story Atlantic City bar will reflect its Jersey Shore surroundings. The new bar will have wider floor plans with more space, and windows to let in the sunlight and salt air.

"Good Dog in Philly is perfect because it's exactly what you want," Garry said. "Whereas here (in Atlantic City) you come off the beach, you don't really want to go sit in a cave."

The new venue will also have a large outdoor area, unlike its Philadelphia counterpart, thanks to the bar's neighbor, Stockton University. The couple hopes the bar will draw some of the hundreds of students living in the new dorm there, as well as their parents and Stockton faculty.

Jersey Shore art will be a major part of the establishment's decor. For instance, Atlantic City nonprofit MudGirls Studios created a tile wall which depicts one of the couple's dogs.

Outside of the building, local artist Heather Hires created a colorful mural depicting pups, surf and sun that will face the outdoor section.

On another wall, Stockton University hired prominent mural artist BKFoxx to create artwork honoring the NAACP Convention, which was held in Atlantic City. The mural depicts three civil rights leaders – Martin Luther King Jr., Muhammad Ali and Fannie Lou Hamer – and is based on photographs of them taken in Atlantic City.

"Down here, everybody was really ready to jump and help us and work with us and put their mark on the building," Gleason said. "It's been kind of fun to build the restaurant and have all these local artists working with us to do really cool things."

The restaurant's core menu will be the same as the original location, including staples like the Good Dog burger, but the specials will differ completely.

"The chef (Carolynn Angle) really wants to focus a lot more on seafood down here," Gleason said. "That's kind of where she came from, and her passion. So she's really excited to be able to play to an audience that's a little bit more interested in seafood because she loves working with it."

Good Dog Bar's expansion to Atlantic City has been a long time coming.

Garry and Gleason came into the property through successful developer Pat Fasano, the couple's landlord in Asbury Park for 10 years. Fasano began buying property and investing in Atlantic City, and reached out to the pair in 2017 to see if they'd want to open a bar there.

At the time, between overseeing renovations in Philadelphia and a general hesitance to make the leap to AC, the couple turned him down. But Fasano persisted over the next few years and in 2020, an opportunity presented itself.

The COVID-19 pandemic had temporarily closed Good Dog Bar in Philly, and Fasano invited them to come see some of the buildings he bought in Atlantic City so far — including the first building he bought there, which happens to be the location for Good Dog Bar.

Garry and Gleason originally passed on it, and it was sold to someone else. That deal fell through due to circumstances caused by the pandemic, and finally things fell into place.

"We went to see this building last," Gleason said. "You know, I think (Fasano) might have planned it that way, now that I say it out loud. As soon as we walked in, we were like, 'This really would be the perfect building for Good Dog.'"

The couple (and their dogs) have always loved the beach, visiting Atlantic City often, and hoped to one day live near it. They also realized the commute wasn't too strenuous between Philly and Atlantic City, so Garry and Gleason figured they could easily tend to both locations.

They had originally planned to open the Atlantic City location in April 2021, but are now aiming for a March 2023 unveiling.

Good Dog Bar traditions will continue in the new establishment, including one that showcases the bar's namesake.

"We will be doing a photo contest down here just like we do in Philly," Gleason said. "So definitely keep an eye out for that, we'll probably be starting in February. So if you want to get your pup on the wall, they're going to have to start working on their photo skills."

More information on Good Dog Bar Atlantic City will become available on the bar's website and on Instagram.