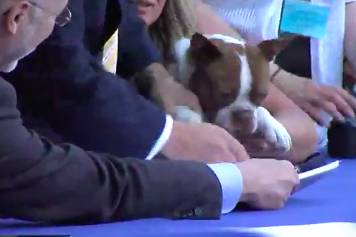 Wolf and other state lawmakers were joined by Libre, the adopted Boston Terrier whose tragic story generated headlines around the world last year after rescuers — tipped off by a delivery driver — found him sick and severely emaciated at a Lancaster County farm.

"Today is a day of celebration for all Pennsylvanians, and animal-lovers everywhere and I am proud to be a part of the true collaboration that helped make this landmark legislation a reality," Wolf said in a statement.

Libre's Law, introduced by Rep. Todd Stephens, mandates the forfeiture of an abused animal to a shelter if the abuser is convicted of a misdemeanor or felony offense. It also provides extreme weather stipulations for outdoor dog tethering, increases protections for horses and grants civil immunity to veterinarians, veterinarian technicians and humane society police officers to prevent frivolous lawsuits when reporting animal cruelty.

Charges for first-time animal cruelty offenders can now rise to the level of a felony, placing these crimes on the same plane as dogfighting and killing animals that belong to an endangered species.

Passage of the law comes late for Pennsylvania, which was one of just three remaining states without strict guidlines for handling animal abuse and cruelty. Act 10 takes effect 60 days from its signing.

“The story of Libre’s shocking mistreatment and miraculous recovery helped spur a broader discussion of how we can better protect animals,” said Sen. Rich Alloway. “The result is a bill that not only toughens penalties against abusers, but also spells out the kind of treatment that is dangerous and unacceptable. Our pets are part of our families and depend on us for their care, so it’s far past time that we ensure abusers face a punishment that matches the heinous nature of the crime.”

Libre, named for "freedom" or "liberty" in Spanish, is now in good health under the care of adopted owner Janine Guido, who brought him in from Speranza Animal Rescue in Monroe Township, New Jersey.

Rep. Stephens, thanking those who supported the legislation, hailed Libre's Law as the most comprehensive animal protection bill in Pennsylvania's history.

“Today we are sending a clear message that Pennsylvania will not tolerate animal cruelty in our state and will punish offenders to the fullest extent of the law."