Grading the Eagles at the quarter pole: Quarterback edition 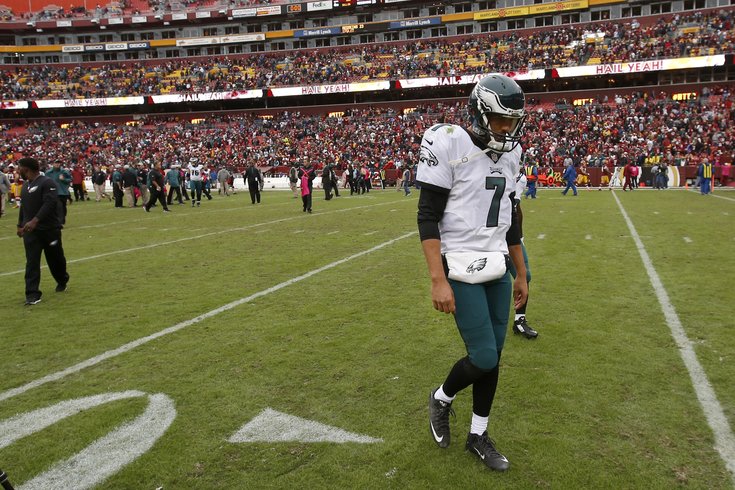 After a phenomenal preseason by Sam Bradford and the gang, the Eagles looked like world-beaters. After four weeks playing games that matter, however, they don’t even look like egg-beaters[1].

Let's take a position-by-position look at the Birds, and hand out some first-quarter grades, starting with the quarterback.

As a reminder, here's what the Eagles gave up for Sam Bradford back in March:

*Per Adam Schefter, the Eagles would have gotten a 3rd round pick if Bradford didn't play at all. They'll get a 4th round pick if he plays less than 50 percent of the Eagles' offensive snaps.

That trade isn't looking so hot at the moment. Bradford has simply been far from the accurate quarterback we saw in training camp and in the preseason, and he has the fourth-worst QBR in the NFL through four games.

On the "excuse" side, the running game hasn't helped, which always makes life more difficult on the quarterback, and his receivers haven't bailed him out by making difficult catches on balls that were off-target but reasonably catchable.

On the "non-excuse" side, with the exception of the Week 4 game against the Redskins, Bradford has had plenty of time to throw. The offensive line's struggles have come in the running game, not in pass protection. Bradford has mostly had very clean pockets to throw from, and he simply hasn't been able to put the ball where it needs to be.

Here are film breakdowns we did of Bradford in the Cowboys and Jets games:

Many of the throws in the above breakdowns should be lay-ups for a good, professional starting quarterback. They've been difficult for Bradford. The Eagles were hoping Bradford could bring stability to what has been a terribly unstable quarterback position since the Donovan McNabb days.

Below is a list of every team in the NFL, and how many quarterbacks they have started their respective team's opener since 2009:

See the teams above with at least four starting quarterbacks on opening day since 2009? Know how many playoff wins they have since the 2010 season, combined?

If you listed the teams around the league who were likely to have someone different behind center in 2016, where would the Eagles be on that list?

[1] The phrase "they don't even look like egg beaters" doesn't make any sense. But that's how bad the Eagles have been. Their badness is seeping into my writing.