Five reasons the Eagles lost to the Redskins 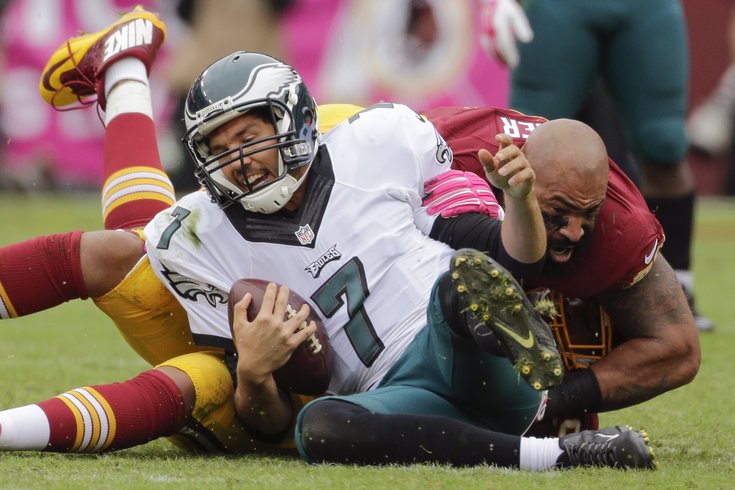 Sam Bradford sacked by the Redskins.

Four games into the season, and the Eagles have yet to play a complete game.

And while it almost didn’t matter on Sunday — they came back against the Redskins before ultimately losing, 23-20, on a late Kirk Cousins TD pass — Chip Kelly’s team won’t be successful the rest of the season if they continue to rely on only one half of solid football each week.

In the first half Sunday, the Eagles were shut out again — a missed 33-yard field goal by new kicker Caleb Sturgis contributed to this — but bounced back with two-straight touchdown drives to open the second half. Against a Washington team that isn’t very good, the Birds were able to overcome a 13-point halftime deficit but allowed a 90-yard touchdown drive late in the fourth quarter that left them less than 30 seconds to try to retake the lead.

Once the Eagles took a 20-16 lead over the Redskins, it seemed like they were actually going to pull this one out. It was a lot like the season opener against the Falcons in that regard; their comeback was almost enough to make you forget about the plethora of problems this team faces.

And a quarter of the way through the season, the Eagles' weaknesses have continued to multiply while their strengths are becoming tougher and tougher to find.

Here are five reasons the Eagles lost to the Redskins on Sunday:

As previously mentioned, the Eagles failed to put together a full 60-minute performance for the fourth straight week, and that continues to be the biggest problem facing this team. It's been hard to find the true identity of this team.

Are the Eagles the team we saw in early in Sunday's loss, or the one that came out in the second half and scored 21 of the next 24 points? It's beginning to look like the former, unfortunately.

Chip Kelly will tell you over and over again how little stock he puts in the time of possession numbers. He's more concerned with the number of plays his team runs compared to his opponents. Here's a look at how it broke down Sunday:

Furthermore, the huge disparity in time of possession almost certainly caused the defense to tire down the stretch, which made Cousins look like a Pro Bowl passer on the Redskins game-winning drive.

The Eagles were just 4-for-12 on third down conversions, and more than one came as a result of dropped passes by the Eagles receivers. Through the first three games of the season, the Eagles had the third-worst dropped pass rate in the NFL, according to SportingCharts.com, at 7.7 percent. They were behind only the Jaguars and the Rams in that category.

I'll have to re-watch the game to see just how many they dropped against the Redskins, but I think it's safe to say they didn't improve on their numbers Sunday. And when you're a team that already forces your defense to spend more time on the field than any other in the league, converting on third down and sustaining longer drives is crucial.

On the other side of the ball, the defense allowed the Redskins to convert on 52 percent (9/17) of their third down plays, including conversions of 19 and 11 yards; there were also at least two third downs on which Eagles penalties gave way to Washington first downs. So while the Eagles offense didn't do the defense any favors, it goes both ways.

Here's another 2-for-1 category.

The offensive line was already banged up and struggling, and that was before losing Jason Peters to an injury on Sunday.   They allowed five sacks in the game, as well as a few rushes that went for negative yardage. But considering the roster overhaul at that position, it's hard to blame the individual players along the line. Many of them are just not starting NFL lineman by standards other than those of Chip Kelly.

And the injuries extend beyond the offensive front. Cornerback Byron Maxwell and linebacker Mychal Kendricks also left the game in the first half. Surely the fact that the Redskins had the ball for almost 13 minutes in the first quarter played a role in their injuries, even if just tangentially.

Are you starting to see how these are all interconnected?

They're just not a good team

There, I said it.

The Eagles may have gone from 1-3 to a playoff team in 2013, but it's hard to imagine that happening again. Their slow start that season likely had more to do with an already formed team learning a new system under a new head coach. This season, there's very little roster cohesion year-over-year, and while it would be nice to say that it will all eventually click for the Eagles, they don't have nearly the same number of "proven" assets as they did in 2013; instead, they have a roster full of question marks.

If we were able to learn anything about this team through the first quarter of the season, it's that they aren't nearly as good as we thought after the preseason. Now, we'll spend the final three quarters of the season trying to figure out if they're actually as bad as we all currently believe them to be.

And as the losses continue to pile up -- and the team sinks deeper into the bottom of the NFC East -- it's going to take even more to convince fans this team has any shot of turning it around.

Let's do some #AndyReidMath here:

Sturgis, filling in for the injured Cody Parkey, missed a 33-yard field goal and an extra point. That's four points, assuming I added correctly. Had he hit on those kicks, the Eagles would have been up 24-16 as the Redskins drove down the field late in the fourth quarter. Worst case scenario, Washington gets a touchdown and a 2-point conversion and the game goes to overtime. Instead, the Eagles lose by four.

Will there be a new kicker at NovaCare on Tuesday? We'll see...