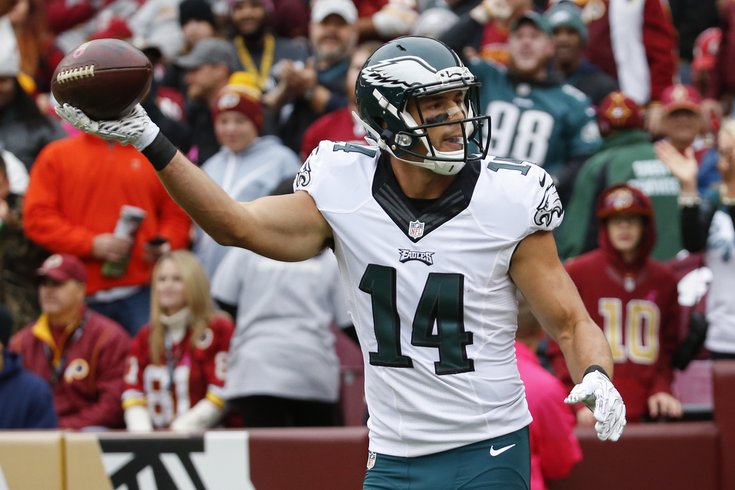 Riley Cooper celebrates after scoring a second half TD against the Redskins.

Hurricane Joaquin missed the DMV, but the Eagles offense was literally a natural disaster in the first half. The Bids were able to turn things around in the final 30 minutes, but they couldn’t close on either side of the ball and fell to Washington, 23-20.

I think the important note here is that, win or lose, the Eagles are currently a bad football team. Here’s what I saw:

•    There was some speculation about whether Chip Kelly would turn to Mark Sanchez at halftime. I imagine Kelly will say that the thought never crossed his mind. Whatever Kelly said to Sam Bradford at halftime generally worked. He went 13-27 for 247 yards and three touchdowns (all after halftime). Bradford finally found some success throwing the ball down the field.

•    It should be noted that Washington cornerback Chris Culliver looked way less than 100 percent. The Eagles did a good job of picking on him.

•    Great play by Brandon Graham to strip Jordan Reed of the football at the end of third quarter. The call was close, but it appears the officials made the right decision. The fumble popped right into the waiting arms of rookie Jordan Hicks (who else?).

•    When the Eagles offense was playing poorly in the first half, why would you even kick the ball to Darren Sproles?

•    Up 20-16 in the fourth quarter, the Eagles offense had two chances to end the game and failed both times. A crucial missed pitch and catch on third down by Bradford and Sproles looms large.

•    When the game was on the line, the Eagles defense gave up a 15-play, 90-yard touchdown drive to Kirk Cousins that ate up the entire clock. That’s not optimal. They might have been gassed from being on the field for 41 minutes, but somebody has to make a play at some point.

•    Back in the preseason when the Eagles offense didn’t have a million problems, Nelson Agholor’s hands were something to monitor. Simply put, he loses concentration and puts the ball on the ground far too easily. After making a long catch, he fumbled a double reverse in Washington territory to end a drive.

•    Another mental mistake by Agholor to pick up an illegal formation penalty that wiped out a touchdown reception for Zach Ertz. The Eagles would come away with zero points on the drive, which proved to be a killer.

•    The Eagles suffered a lot of important injuries in this game. Byron Maxwell, Jason Peters, and Brandon Bair all left the game in the first half and didn’t return.

•    As much as we can blame the inability to close, the Eagles can’t continue to lay complete eggs in the first half of the game and reasonably expect to win. When you dig such a huge hole, there is almost no room for error.

•    It’s hard to believe any team surrenders more preposterous 3rd-and-long conversions than than the Eagles. In the first quarter, Chris Thompson ran a draw up the middle on 3rd and 19 for 43 yards. Then in the 3rd quarter, Jamison Crowder caught a Cousins lollipop throw for a first down on 3rd and 13. Both drives ended with field goals. Does Billy Davis go the bathroom or something after second down?

•    If I were talented enough to be an NFL running back, my hair would be cut as short as possible. Fletcher Cox almost yanked Matt Jones’ dreadlocks off his head in the first half, a legal play.

•    It’s nice that Caleb Sturgis reaches the end zone on his kickoffs, but you can’t miss 33-yard field goals and extra points. Washington should have been forced to go for two points to simply tie the game at the end. It will be interesting if his career with Eagles lasts all of one game.