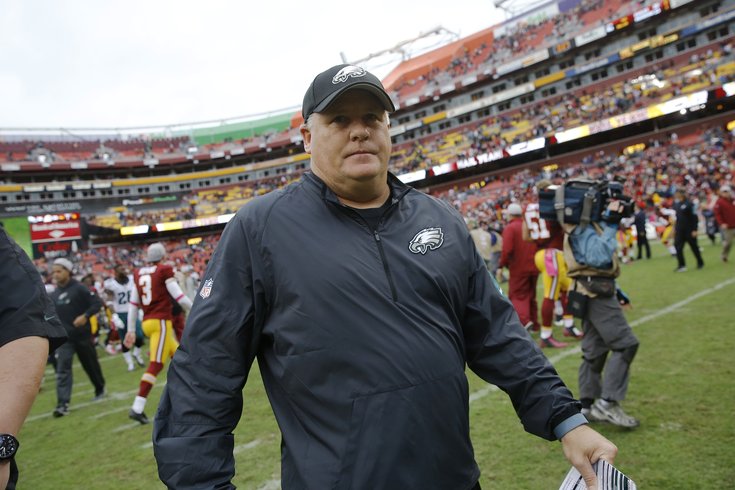 "We're from Philadelphia and we bite."

1) The "I'll Pass on This Game" Award: Hurricane Joaquin

Joaquin was going to check out the Eagles-Redskins game today, but he changed his mind:

Here's why Hurricane Joaquin decided not to make landfall on the Eagles-Redskins game: pic.twitter.com/5LVtjTFRww

And yes, I'm aware that's a tornado, not a hurricane. Let's focus on ragging on the Eagles, not my MS Paint animations. Thanks.

2) The "One Week With the Eagles" Award: Caleb Sturgis

Sturgis missed a short field goal and a PAT. Those were four points the Eagles left on the field. And hey, look! They lost by three! It was nice knowing ya, Caleb.

DeMarco Murray has 29 carries so far this season. Last year he had 24.5 carries per game. And Murray doesn't seem to be happy about it:

Is DeMarco Murray getting enough touches? Murray: "No, I'm not. I don't think I am."...Said he knew what he signed up for, but expected more

It's a good thing the Eagles paid him all that money.

OK, so today the Eagles "only" had three three-and-outs, which was better than some other games this season. But they had their share of four- and five-and-outs as well. Donnie Jones has punted 26 times this season, and is on pace for 104 this year. Only four punters have had more in a single season since 2006.

Chip Kelly doesn't care about time of possession, and honestly, I don't fault him for that, as long it's within reason and the offense is scoring. But they're not scoring, so it's becoming an unacceptable trend.

In the last 15 seasons, 14 teams have possessed the ball for less than 27 minutes per game. Here they are in chronological order:

What Kelly does care about are the number of snaps each team runs. Against the Redskins, the Eagles ran 51 snaps. The Redskins ran 79. Here's how the snap count battle has gone in each of the first four weeks:

Sooooo... You know, awful, however you want to view it. The defense is going to be dead by the end of the season, which doesn't really matter since the season will be long over by the time anyone will care.

The offense's inability to move the football has put the defense in terrible situations all year. However, the defense isn't completely absolved of blame, as they have struggled to get offenses off the field at times. Again, they are going to be dead by the end of the season.

7) The Cinderblock Hands Award: Um, just, everybody I guess

We give this out every week it seems to whoever had numerous drops. At this point, let's just make the blanket statement that this team simply does not catch the ball well.

8) The Shambles Award: The offensive line

With Jason Peters and Andrew Gardner out, the Eagles were forced to roll out the following OL in the second half against the Redskins:

Unsurprisingly, Sam Bradford was sacked five times. Regarding the OL, I hate to say I told you so, but...

Frankly, it was easily predictable that the Eagles OL could be a major issue this season.

9) The "But, But, But the NFC East Still Stinks" Award: Delusion

Yes, the Eagles are 1-3, and if the Cowboys lose to the Saints, a reasonable possibility, the rest of the teams in the division will all be 2-2.

Stop it. This team is straight garbage right now. Don't even look at the rest of the division.

10) The "Shopping For a New QB" Award: The Eagles this offseason, and possibly forevermore

When the 2015 season began, 11 teams had started at least four different QBs in Week 1 over the last seven years. They were the Rams, Bills, Buccaneers, Redskins, Jaguars, Titans, Vikings, Browns, Raiders, Cardinals, and Eagles. The combined number of playoff wins those teams have since 2010?

The Eagles started their fifth in seven years Week 1 when they started Sam Bradford. Bradford's numbers were good against the Redskins, but they were misleading. He made three very good deep throws, but was otherwise erratic, and did not pass the eye test. Philly may be starting QB #6 in eight years in 2016.