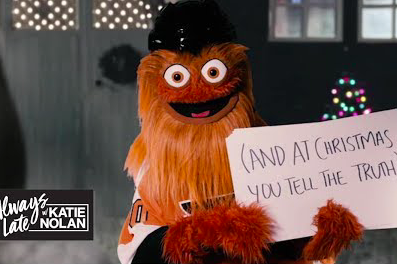 Gritty makes a Christmas visit to the home of ESPN personality Katie Nolan.

The assumptions we make about Flyers mascot Gritty are all pretty premature in his early days of existence. His true identity reveals itself tweet by tweet and in every special appearance somebody pays him handsomely to make.

This weekend, Gritty paid a special visit to the home of ESPN personality Katie Kolan, whose new show, "Always Late With Katie Nolan," is her first dedicated program with the network since leaving FOX Sports 1.

The purpose of this visit was to be extremely petty and condescending. We now know Gritty excels at this.

DO-IT-YOURSELF: How to make a Gritty Christmas tree topper

What looks like it'll be some caroling or a warm gesture turns into a long, card-by-card rant in which Gritty reveals his former amateur profession. Let's just say he knows his football.

Gritty is living the life of a king these days. If you're wondering how much his time is worth, about $3,000 per hour is a ballpark approximation, sources told PhillyVoice. He's already made more than 100 appearances since his debut a few months ago.

The lesson from the video above is that he's reading everyone's tweets and is ready to tear you down if he disagrees.