Kenney's refusal to declare gun violence a public emergency is 'a slap in the face,' activist says 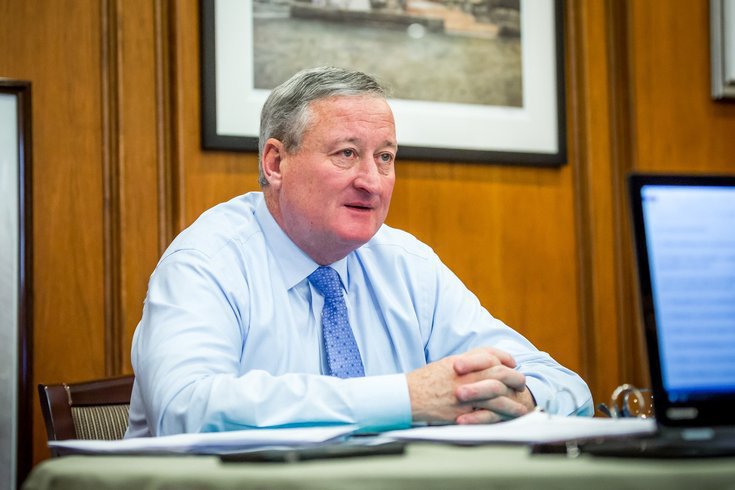 Mayor Jim Kenney formally declined to declare a state of emergency over gun violence in Philadelphia on Monday. Reacting to the news, one anti-violence advocate says it was a 'slap in the face.'

The strike ended when Kenney met with Johnson and said he would "work to do what we can to fulfill the resolution" and get the violence under control.

Several months and hundreds of homicides later, Kenney informed Councilmember Jamie Gauthier, who authored the resolution, in a letter that an emergency declaration "is not a solution that will demonstrably change conditions in Philadelphia." A copy of the letter was obtained by PhillyVoice.

Johnson took that move personally, calling it "a slap in the face." On Tuesday, the Marine Corps veteran posted a video of his interaction with Kenney that ended his hunger strike on Facebook.

"Mayor Kenney lied to me and now he's giving up on the fight against gun violence!" Johnson wrote.

Mayor Kenney lied to me and now he’s giving up on the fight against gun violence! GET THE HELL OUT OF OFFICE!

Last September, City Council unanimously approved the resolution, which called for gun violence to be declared a public health crisis that is treated with the same level of urgency directed toward COVID-19. Earlier this month, New York Gov. Andrew Cuomo made a similar declaration, calling it "a matter of life and death."

In his letter, Kenney urged Gauthier to "keep working on solutions to invest in and heal communities hurt by gun violence and resist the temptation to issue statements that will not have the desired impact." He pointed to the $155 million in the city's budget allocated to preventing violence and addressing its root causes. He said he welcomed "additional state resources and changes to regulations that stem access and the flow of illegal guns."

"Local government leaders across America are doing everything we can within our powers to bring resources, coordination and attention to the epidemic of gun violence that continues to spread like a disease across our nation," Kenney wrote.

But Gauthier on Tuesday rebuked any notion that an emergency declaration would be merely for show. In a statement, she said her resolution would demand "greater speed and transparency on the implementation of gun violence prevention initiatives, enhanced coordination among relevant city agencies, and leveraging the resources of Philadelphia's dynamic business community."

"For the mayor to offer such a flippant, tone-deaf response to our call for action after so much time has gone by, and so many people have been injured or killed, is simply unconscionable," said Gauthier, who represents the Third District. "The mayor's letter did nothing to address the reality of what people in my district are grappling with on a daily basis."

Philadelphia police have reported 309 homicides in 2021, a 34% increase from this time last year. The summer has been especially bloody, with the Inquirer reporting an average of more than 10 people shot per day in July.

That includes a double homicide that occurred when more than 100 shots were fired into a Fourth of July cookout in Gauthier's district and a quintuple shooting Friday night that killed one man and injured a 14-year-old girl in southwest Philly. On Saturday, a 1-year-old boy was injured in a double shooting at North 50th Street and Haverford Avenue.

Kenney is set to hold another bi-weekly update on gun violence at 1 p.m. Wednesday. The briefing can be streamed live on the city's Facebook page.

Although Johnson was disheartened by Kenney's refusal to declare a state of emergency, he said it doesn't change the ferocity with which he will continue to advocate for change.

"The state of urgency has been around for quite some time, and there's no real level that we can increase," Johnson told PhillyVoice. "... We're at the highest level for the mayhem and the carnage that's going on in the streets."

Part of that work, he said, will involve pushing more council members to hold the mayor accountable.

"Most of these people in City Council were born and raised here in Philadelphia; they know exactly what the hell we've been through," he said. "... The question is 'why the hell aren't they doing anything?' And that's what (is) getting me pissed off."

At least two councilmembers took to social media to voice opposition to Kenney's decision. Councilmember Katherine Gilmore Richardson tweeted, "Our babies are dying. If that's not an emergency, nothing is."

Declaring a gun violence emergency will help Admin get the $ @PHLCouncil allocated to comm groups asap. We cannot & WILL NOT take NO for an answer. Our babies are dying. If that's not an emergency, nothing is. I stand w/CM Gauthier. @PhillyMayor declare a state of emergency NOW! https://t.co/FDL7sqTmiD

Gauthier, meanwhile, spent Tuesday as a panelist on a virtual forum focused on the link between food insecurity and gun violence.

"I am beyond disheartened by this outcome, but it won't weaken my resolve," she said. "I will not stop fighting for justice for our neighborhoods until safety is restored to our streets."