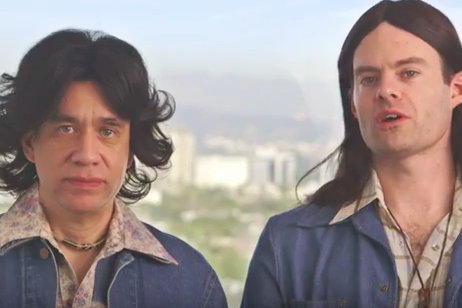 Fred Armison and Bill Hader, dressed as Gene and Clark of The Blue Jean Committee, announce Hall and Oates 2016 tour.

Those familiar with IFC's hilarious Documentary Now! series, which spoofs Vice's global reporting and other investigative projects, will be happy to know that two of its leading producers, Fred Armison and Bill Hader, just tackled a subject near and dear to the city of Philadelphia.

Earlier this week, Armison and Hader, in costume as Gene and Clark of the soft rock group Blue Jean Committee, released a video announcing Hall and Oates' 2016 tour alongside Sharon Jones & the Dap-Kings and Trombone Shorty & Orleans Avenue.

After an obligatory cheesesteak reference, Gene and Clark claim to have headlined shows opened by Hall and Oates before they hit it big. They supposedly then got ditched by the multigenerational Philly duo, which went on to pick up a diehard fanbase and achieve critical acclaim.

A high point for The Blue Jean Committee, meanwhile, was a chance to play their hit "Catalina Breeze" on Late Night with Seth Meyers last August.

As local royalty, Hall and Oates had the honor last October of opening up the brand new Fillmore Philadelphia in Fishtown. They'll return to Philadelphia July 10 at the BB&T Pavilion.