Handing out 10 awards from the Eagles-Colts game 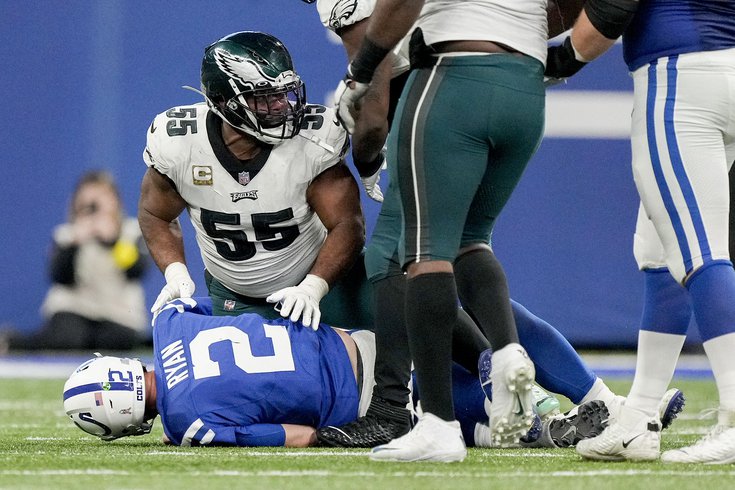 Brandon Graham had another clutch sack.

The Philadelphia Eagles survived against the Colts, and they'll leave Indianapolis with a win in a game that they trailed for 54 minutes and 17 seconds. As always, win, lose, or tie, we hand out 10 awards.

With 5:44 left to play and holding a 3-point lead, the Colts had a 1st and Goal from the Eagles' 5 yard line. The Eagles defense stopped Jonathan Taylor for no gain on first down, they forced Matt Ryan to throw the ball through the back of the end zone on second down, and on third down, Haason Reddick showed why the Birds made him their priority free agent signing this offseason.

Haasan Reddick with a huge sack to force a FG attempt from Indy! pic.twitter.com/GdoMkB8cEM

Reddick was lucky that he wasn't called for a face mask penalty on the play, but I guess the Eagles were owed a face mask forgiveness call after last Monday night against the Commanders.

That sack forced the Colts to kick a field goal, keeping it a 6-point game.

Fast forward to the next defensive drive, after the Eagles took the lead, and the pass rush closed out the game with a Brandon Graham sack.

Brandon Graham goes speed to power & uses great strength, leverage & leg drive to walk his blocker back into the QB & get the sack. Assist to Javon Hargrave for bull rushing Quenton Nelson into Matt Ryan as well! #passrush #flyeaglesfly pic.twitter.com/mrmqsWJbOa

BG owned Colts LT Bernhard Raimann on that play. Last week, Graham was considered a goat (the bad goat version) after his questionable roughing the passer penalty on Taylor Heinicke. This week he closed out the game.

The Eagles had four sacks on the day, but the two noted above were clutch.

It's kind of remarkable that Joseph and Suh were even able to play. The Eagles signed Joseph four days ago, and Suh three days ago, but there they were, right in the middle of the Eagles' defensive line, and for a healthy number of snaps.

Joseph had four tackles and a half-sack. He also proved to be a significant upgrade clogging up the middle of the line over the assortment of guys who have tried to fill Jordan Davis' shoes the last two weeks.

Suh had three tackles, and he split the sack with Joseph.

In the postgame locker room, Joseph was asked about the end of the game. He said, “I knew we were going to have to drop our nuts… it was that moment, do or die. Who wants it more?”

So I guess he's a fan favorite now.

With 4:37 left to play, Hurts was tasked with driving the offense 75 yards for a go-ahead score. Hurts and the Eagles were aided by a 39-yard pass interference call on a deep throw down the field to Miles Sanders, and otherwise pretty much moved the ball down the field on the ground.

Hurts finished off the drive with a QB draw on which the Colts' defense somehow left the middle of the field wide open.

The offense struggled for most of the day, often shooting itself in the foot.

There isn't much Hurts can do about all of that. Still, he stayed poised and got the job done.

Credit Sanders for helping force the pass interference call deep down the field. A point of emphasis for the Eagles' offensive staff is coming back for the football through the defender on passes deep down the field that are left short. Sanders isn't running many go routes these days, but when the opportunity arose for him to take advantage of a panicked linebacker in coverage, he was able to capitalize.

Nick Sirianni said that Sanders' play will make the "teach tape," or an instructional example of a smart play.

On the Colts' first drive of the game, Jonathan Taylor ran seven times for 49 yards and a TD. After consecutive performances against the Commanders and Texans in which the Eagles' run defense was leaky, it looked like it might be another long day.

Linval Joseph was in there for a bunch of plays on opening drive, his first action of the season

After that initial drive, the run D tightened up. Taylor rushed 15 times the rest of the day, and only gained 35 yards.

Jack Stoll, Grant Calcaterra, and Tyree Jackson will have to hold down the fort for the next month-plus while Goedert recovers from a shoulder injury. That trio of tight ends combined for three penalties and one target in the first game without him.

After losing a devastating fumble a week ago against the Commanders, Watkins atoned for his mistake with a 22-yard TD reception.

Hurts to Watkins! @Eagles pull within 3.

There were a lot of questionable coaching moments in this game, such as:

Perhaps we'll dissect some of those moves in greater detail this week, but I don't think this young staff had a great day in a season in which they have otherwise been stellar..

Sirianni very clearly wanted this game badly, after Jim Irsay fired his good friend and mentor Frank Reich. After the Eagles turned the Colts over on downs in the fourth quarter, Sirianni stood on the bench, and had himself a moment of exhilaration with some Eagles fans.

Nick Sirianni is fired up after beating the Colts 🦅
pic.twitter.com/YscHEESt96

Postgame, Sirianni was asked about the emotional element of this matchup.

Shouts out Frank Reich. Can tell this win means a lot to him because of Colts firing Reich pic.twitter.com/glocpoPVYn

Jalen Hurts gave Sirianni a game ball in the locker room after the game.

10) The 'Breathing Room' Award 😅: The Eagles, atop the NFC once again

In addition to their win, the Eagles were helped by other games around the league.

The Giants lost to the Lions, thus giving the the Eagles a two-game cushion in the NFC East once again.

As of this writing, the Vikings, who were tied with the Eagles atop the NFC with a 8-1 record heading into Sunday, are losing to the Cowboys 37-3. If the Cowboys are able to close them out (I like their chances), the Eagles will once again have a one-game lead — plus and head-to-head tiebreaker — over the Vikings.

Next up: Aaron Rodgers and the Green Bay Packers.