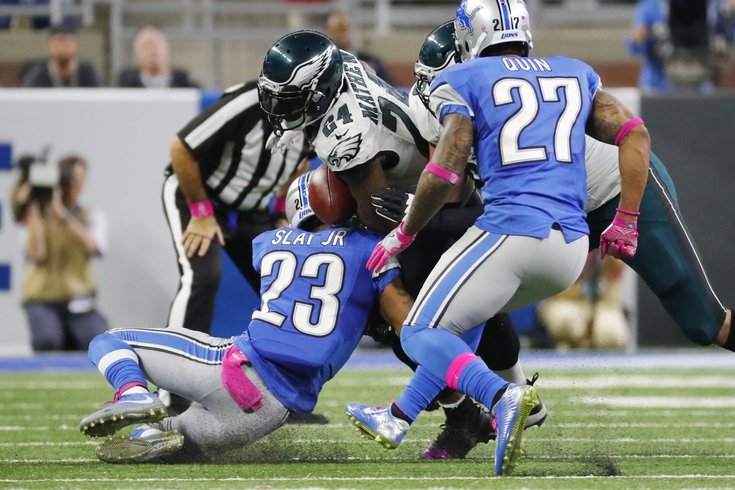 In the Philadelphia Eagles' loss to the Detroit Lions on the road at Ford Field, we learned that the Birds aren't going to finish the season 19-0. As always, win or lose, we hand out 10 awards.

So it would appear that Carson Wentz can make mistakes after all. After narrowly avoiding throwing two interceptions earlier in the game, Wentz finally threw his first pick on his 135th pass attempt of the season. This was the Carson Wentz that I personally expected to start the season – one who would make "wow" plays, but would also be prone to the occasional big mistake. On his deep throw that landed in the arms of Lions CB Darius Slay, Wentz got a little too greedy, and it cost him.

"I was surprised he even threw that," said Slay. "I was in great position, so I'm like, 'OK,' But then I looked in the air and I said, 'Oh the ball is coming for real. He's really throwing this. Oh well, it's time for his first career pick.' I was like, 'Oh this is me right here, for sure.' He's a talented guy, man. I was kind of surprised. I didn't believe the hype at first, but he's a very, very great decision (maker). But right then I just made a better play."

For all the nonsense talk of Carson Wentz being a "dink and dunk" quarterback over the last two weeks, Wentz probably should have made a safer throw on that play. But certainly, he didn't shy away from making the aggressive play in a big spot, for which we'll neither condone or overly condemn him.

But the "wow" plays were certainly there as well. On the the play where Wentz escaped the pocket to his right and pointed for Jordan Matthews to go deep, only to throw a back-shoulder jawn behind a corner who was hustling to defend a deep ball, you just don't see that level of veteran improvisational skills from a rookie.

Yes, Wentz is human, but clearly, the Eagles have their franchise quarterback.

It is beyond comprehension how Ryan Mathews can fumble in the situation that he did. It's literally the ONE thing that you cannot do in that situation, and Mathews gifted the Lions outstanding field position, which enabled them to take a one-point lead with a field goal.

On the play, which was a sweep to the right, Mathews held the ball in his left arm (the inside arm) which you learn not to do in Pop Warner. It's not as if Mathews changed direction on the play or something, and just didn't switch arms. The play design was to the right! And once the play was clearly bottled up, that's when you protect the ball with both arms. Awful fundamentals. Awful game awareness. Just awful everything.

3) The 'Rotate This' Award: Jim Schwartz

Throughout the first half, Mychal Kendricks and Stephen Tulloch saw the field far more than Nigel Bradham and Jordan Hicks. During the game itself, the assumption was that Bradham was being disciplined for being arrested for the second time in a 69-day span earlier this week.

Bradham especially played well in the second half, collecting five tackles (three tackles for loss) and a fumble recovery.

Kendricks just isn't good. While Schwartz has deservedly gotten a lot of credit for the way the Eagles have played great defense so far this season, choosing to play Kendricks over Hicks or Bradham just doesn't make much sense to me, in any scenario.

And by the way, Bradham may be a cabana boy-beating, gun-toting "dumbass," but the man can play football.

5) The Incompetence Award: The officials

Blaming officials for a loss just isn't a good look, and we'll aim not to do that here. The Eagles had this game within reach, but ultimately they didn't get the job done.

Still, good God the officials were incompetent today. They called Connor Barwin (you know, a defensive player) for being an illegal man downfield (on a play on, you know, offense), and then just apparently decided not to enforce that penalty without explanation. Their flags were exceedingly late, and they fell for obvious flops. For example, RG Brandon Brooks was called for holding because a Lions linebacker threw his hands in the air, begging for a call. That wiped up a long Ryan Mathews run.

On the day, the penalty count looked like this:

Does that seem oddly disproportionate, or is it just me?

Not only did the Eagles lose, but the Redskins won, and as I type this at roughly 5:45 Sunday evening, the Cowboys hold a 21-0 lead over a talented Bengals team.

Here's an astute observation from our Matt Mullin:

Eagles went 257 offensive plays this season before turning the ball over.

They then committed a turnover on each of their next two plays.

And obviously, those two turnovers cost the Eagles this game.

Sturgis was 3/3 on his field goal attempts, including a huge 50-yarder to close the first half, as well as 49-yarder later in the game. Had the Eagles won, Power Sturge would be getting a lot of love, but in a loss, big kicks kind of get lost. We'll make sure he at least gets a sliver of love here.

9) The 'Where Were the Other Running Backs?' Award: Doug Pederson

In the first three games this season, running backs Kenjon Barner (14-86-1) and Wendell Smallwood (20-96-1) have both been effective when they have gotten chances to run the ball. Pederson has done a very effective job rotating the four backs, utilizing their varied skill sets. Against the Lions, Barner and Smallwood were marooned on the sidelines in favor of Mathews, who has arguably been the least productive of the Eagles' backs.

10) The Tip of the Cap Award: Matt Stafford and the Lions

The Lions were severely under-manned in this game, but they played far better than expected, executing on offense, and getting excellent play from Stafford in the first half.  They were a better team today than most (self included) gave them credit for.