Just be open-minded about it ... 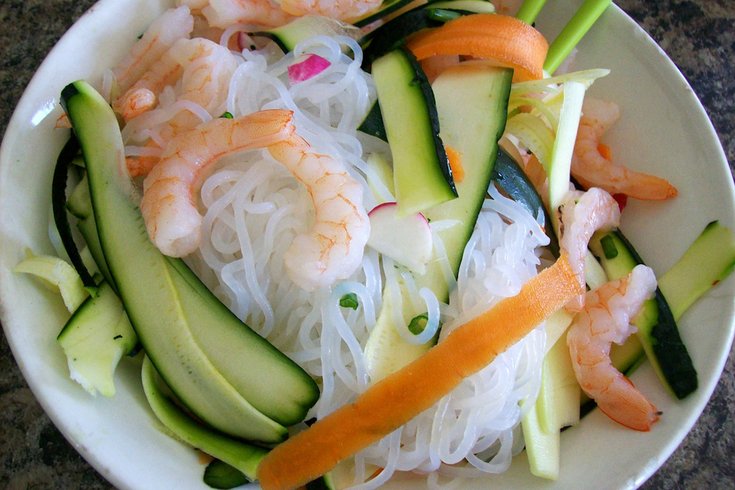 No matter the time of year, a bowl of noodles is a mouth-watering option, but these typically carb-heavy gems are particularly alluring in times of, say, a polar vortex.

Despite putting the comfort in comfort food, noodles and pasta — which aren’t exactly what you picture when it comes to healthy eating — can actually be healthy, depending what they’re made of, a registered dietician told Well and Good.

Obviously, protein-rich pastas that have emerged in recent years — including Banza and the like — are a healthy option if you’re looking for a hearty bowl of pasta. But there are a few lighter options that can scratch your noodle itch, with slightly less calories and carbs (if that’s important to you).

Peep the healthier noodle options you probably haven’t eaten before, below.

These half-transparent noodles made from the jelly-like extract left after steaming edible kelp — a brown seaweed that grows in the depths of the ocean. Typically used in Korean cuisine, kelp noodles are rich in a number of nutrients – namely calcium, iron and vitamin K, according to Livestrong. But keep in mind they are naturally high in sodium. A half cup of homemade kelp noodles has 186 milligrams of sodium. Adding another one-eighth teaspoon of salt to make your noodles is another 250 milligrams of sodium.

Given that these noodles originate from Korean kitchens, they take well to Asian pasta dishes like this sesame chicken kelp noodle recipe that’s both Paleo and low-carb.

Mung beans offer plenty of vitamins and minerals, including protein, zinc, B vitamins, folate and more, according to Healthline.

Also known as “glass noodles,” these noodles are dehydrated strands made from mung bean starch, according to Livestrong, and they provide a good source of choline, which helps protect the structure of the cell membranes.

These noodles are also native to India and Asia, so they fit seamlessly into recipes involving those flavors, including this recipe for pan-seared Sichuan shrimp with mung bean noodles.

OK, so these are the noodles that you might already know about. Shirataki noodles are almost entirely free of calories and carbohydrates and boast some pretty great health benefits – from reducing blood sugar levels to cutting cholesterol and improving gut health, according to Dr. Axe:

They are made primarily from glucomannan, a type of fiber that comes from konjac root. Konjac, sometimes known as devil’s tongue or the konnyaku potato, is a type of plant that is native to eastern Asia....Shirataki noodles are made mostly of water, containing about 97 percent water and 3 percent glucomannan fiber.

Shirataki noodles pair wonderfully with Asian dishes, though their versatility means they can be used in typically carb-heavy Italian dishes like this low-carb chicken Tetrazzini.

Aside from being packed with vitamins and nutrients, these pasta alternatives are healthier, too, because, unlike white flour pasta, they don't cause a huge spike in blood sugar.