Here's how to get an Eagles 'green' cheesesteak before Sunday's game 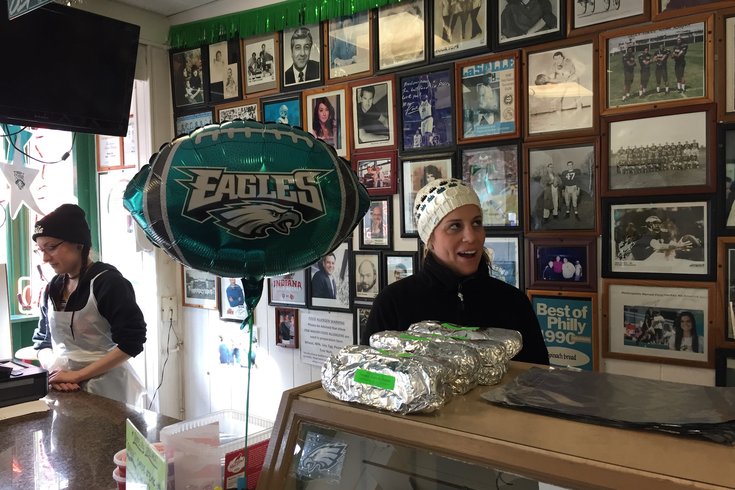 I get it, I get it. You’re all pretty excited about the Eagles game on Sunday.

Pro tip: Don’t let that excitement make you forget that you have to sustain yourself with Birds-themed food and beverages throughout the day.

That is very cool.

Here’s something else that’s very cool too, and it didn’t require the flouting of long-standing norms to come to pass.

It opened its doors in 1984 after the Marchiano family expanded their “specialty breads” operation out of the family rowhouse across the street from their current location.

The patriarch of the successful operation, Frank, credits the long-standing business – more than 30 years of baking – to his mother Nunziata, who came to Philly from Acri, a small village in southern Italy, with recipes in tow.

As happenstance would have it, Frank got hurt on the job a few decades back and decided to start baking bread in the basement with his wife, Kathy. He went around to neighborhood bars, establishing a distribution network in the neighborhood.

The rest is family, and Manayunk, history.

“Our whole lives revolve around the Eagles. My blood is green and white.” – Christina Marchiano

On Friday, Frank’s daughters Christina and Daneen were at the storefront operation with an eye-catching sign out front featuring the Eagles logo.

Inside, there are football decorations hanging from the ceiling, numerous Eagles among a wall of framed pictures behind the counter and various Birds-themed balloons and decorations.

On Sunday, they will serve those “green” cheesesteaks with long hots to customers who’ve tied up the phone lines with hundreds of orders over the past few days.

No, the steak itself isn’t green. 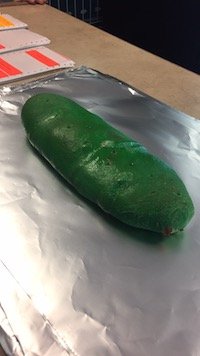 That change – done solely for these special offerings – comes with a dose of green food coloring.

The first time the Marchianos gave it a whirl came in the early 2000s, just before the Eagles' last Super Bowl appearance.

On Friday afternoon, Christina and Daneen said the busiest times for the 24-hour operation come around the holidays when customers line up to get the specialty breads for their parties. But then, Frank came up with the unusual idea for the green bread.

“That Super Bowl was our biggest day ever,” Daneen said.

Judging by the excitement from last Sunday’s green-cheesesteak sales, should the Birds defeat the Vikings, the upcoming Super Bowl will become their biggest day ever.

Let’s not get ahead of ourselves, though. There’s still a football game to be played and green cheesesteaks to be eaten.

“People have been calling all day,” said Christina, which 30-year employee Eileen acknowledged with a tired nod of the head.

She didn’t really have an answer for where the green-dough idea came from beyond, “That’s just my dad!”

Christina, who remembers sleeping on the 100-pound bags of flour that her mom carried into the bakery when she was 6, said they’ve done Eagles, Flyers and local college logos on their trademarked tomato pies – and red dough when the Phillies made their World Series runs.

But nothing quite matches the excitement surrounding a potential Super Bowl win.

“Our whole lives revolve around the Eagles,” she said, confessing to knowing each and every word to the “Buddy’s Watching You” song from 1988. “My blood is green and white.”

They hanged “Chuckie” and Warren Sapp dolls up outside when the Eagles faced Tampa Bay Buccaneers in the 2002 NFC Championship game; the former, because then-coach Jon Gruden resembled the horror puppet.

We all know how that game went, but what of the dolls?

“When we lost, some guy came in the store, grabbed scissors and started cutting them to pieces,” she sighed.

This year feels a little more special that previous playoff runs, though. They say it has for months now, and they reckon it’s because quarterback Carson Wentz ushered in a new era for the fanbase.

“The vibe in here among customers and Eagles fans has just felt different,” Daneen said. “I haven’t ever seen it like this before.” 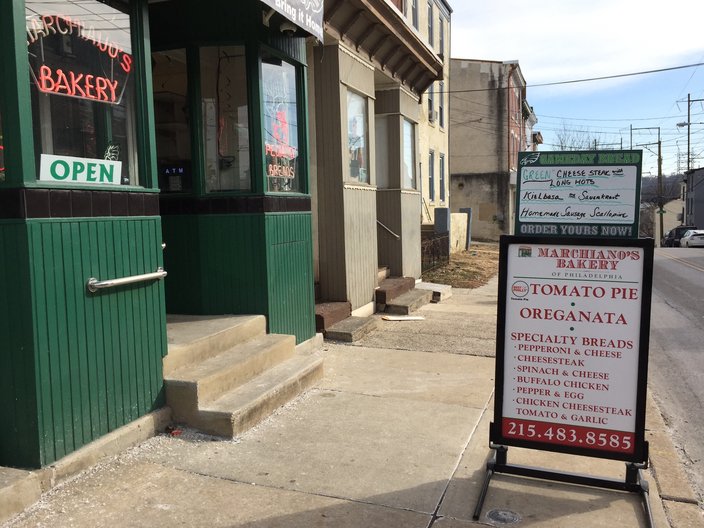 Marchiano's Bakery is located at 4653 Umbria Street in Philadelphia's Manayunk neighborhood. Expect to see a line out front should you pass by on Eagles gameday.

So, about those green cheesesteaks.

They cost $7.95 each and are available at the bakery (4653 Umbria St.) starting at 8 a.m. Sunday. They suggest getting orders in by noon on Saturday to “guarantee your order,” but will continue making them through Sunday morning.

If it’s anything like Friday, should you go and get one, you can expect to hear two words before you leave the premises: “Go Birds!”