Here's where Philly ranks in terms of titles (hint: it's not pretty)

Monday marked the first day of spring. And after the cold we felt over the last few weeks, the 50-degree temperatures outside were more than welcomed. The snow was melting. The Rita's water ice was free. And on sports talk radio, there was a lot of complaining about the current state of sports in this city.

While listening to the midday show on SportsRadio 94 WIP in my car, hosts Joe DeCamara and Jon Ritchie began discussing something they received from one of their listeners. Basically, it was a reminder of just how bad local sports has been over the last three-plus decades in the form of a list of cities that have won more professional sports championships than Philly since the Sixers last won in 1983.

Sure, titles are hard to come by in professional sports, but since 1984, there have been 130 other teams to earn victory parades. And it's not like this city hasn't had its share of chances – Philly is 1-8 in championship games/series since '84 (and 1-9 if you count the Phillies' 1983 World Series loss, which technically came after the Sixers' win earlier that year).

In short, there hasn't been a ton of winning, but when there is, it's more often than not met with heartbreak.

I couldn't listen to all of DeCamara and Ritchie, so when I got home, I decided to do some research on my own to see what this list would actually look like. It was one thing to hear it, but seeing it written out front of you, that's when it really starts to sting.

Before breaking any of this down, let's take a look (preferably through one of those contraptions people use to look directly at the sun during a solar eclipse):

Pretty bad, right? Here's a more visual depiction of those numbers. And while it looks prettier, trust me, the numbers add up the same way. 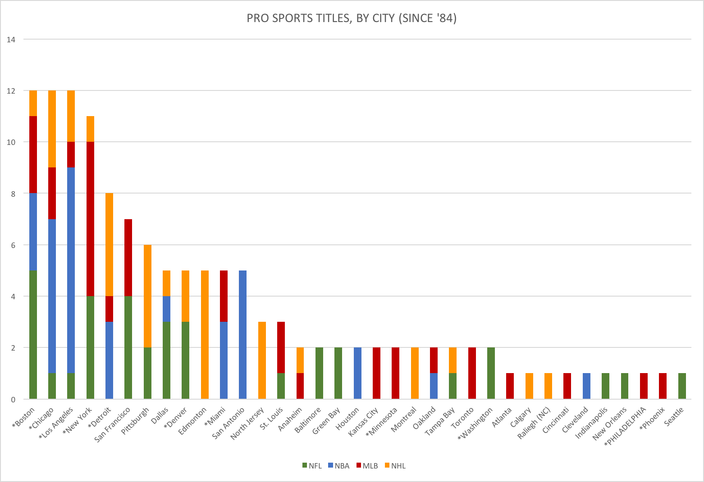 Now, a few short notes about these numbers that I think are important:

It's been almost nine years since the last parade down Broad Street (for a pro team, anyway), and almost 33 since the one before that. The next logical question is when will this drought – I'm still considering one championship in 131 seasons a drought – come to an end?

And who will be the team to do it?