The Vikings scored more points than police made arrests 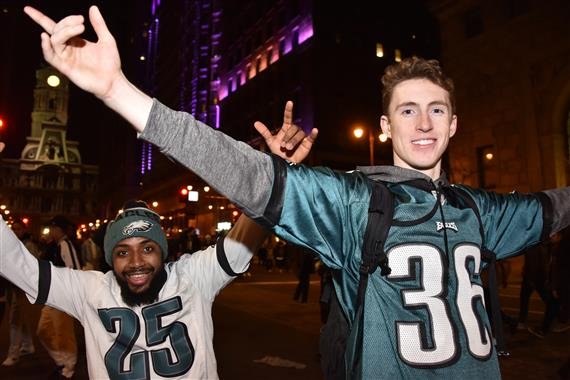 As the waning seconds ticked away in the NFC Championship game Sunday night, Eagles fans took to the streets in jubilation.

For the first time since 2005, the Eagles were headed to the Super Bowl.

Tens of thousands of people spilled into the parking lots outside Lincoln Financial Field. They rushed onto Broad Street in Center City, and flooded Cottman and Frankford avenues in Northeast Philadelphia.

Many of them celebrated into the early hours of Monday morning, reveling in the Eagles' 38-7 defeat of the Minnesota Vikings, an unexpected drubbing in a season full of unanticipated outcomes.

One fan scampered around with a road drum on his head. Another unfortunately smacked into a pole while running beside a subway train. And at least one guy successfully climbed a light post, even though it was greased by police prior to the game.

But the fans mostly celebrated peacefully, if not a little drunkenly. In fact, the Vikings put up more points than Philly police made arrests.

Just six arrests related to the NFC Championship game were made, according to a police public information officer. And three of them came for counterfeit ticket sales.

The other three arrests included two for disorderly conduct and another for assaulting a mounted Pennsylvania State Police officer.

During the assault, which occurred during a pregame tailgate, the alleged offender also punched the police horse twice. That's the second time in two weeks that an Eagles fan socked a police horse.

Similarly, SEPTA police reported no arrests related to the Eagles' celebration. Spokesman Andrew Busch said a few fans were cited for open alcohol containers, but no one was arrested.

"If the Vikings win, yes, I would take off any sort of, like, colors," Baydala told Fox9. "I know it sounds ridiculous, like we're almost talking about gangs here, but it's no joke down in Philly. It really isn't."

Turns out Baydala had not the slightest reason to worry about a Vikings victory.

Prior to the game, Philadelphia Deputy Police Commissioner Dennis Wilson announced they would have additional officers stationed both inside and outside of Lincoln Financial Field. District captains also developed strategies for managing crowds at popular hotspots.

Despite the minimal number of arrests, there were still some knuckleheads in the crowds. Some Vikings fans reported being subjected to "random acts of violence," including unopened beer cans being tossed their way.

The team bus was pelted with projectiles and some fans paraded around with a sign reading "F*** Millie," a reference to a 99-year-old Vikings fan who was featured in media coverage prior to the game.

Philly police will hold a press conference next week to detail police preparation for the Super Bowl.

SEPTA reported that 29,045 riders road on the Broad Street Line on Sunday, setting a ridership record for the second straight week. During an average Eagles game, ridership is about 12,800 people.